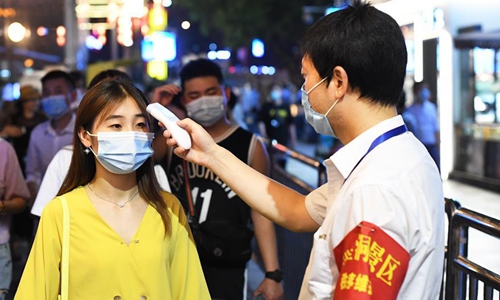 Tourists have their body temperature measured before entering the Hongyadong scenic area in southwest China's Chongqing, May 3, 2020. Measures for COVID-19 prevention and control are still carried out in Chongqing's famous Hongyadong scenic area during the Labor Day holiday. Visitors are required to pre-book their tours and plan their visit ahead of time to avoid overcrowding. (Photo: Xinhua)

A total of 21 Chinese provinces and regions have lowered their public emergency response level for COVID-19 to level three after Shandong and Henan did so on Wednesday.

As of Wednesday, only eight provincial-level regions remained at level two, two have been lowered to level four, and none is at level one, people.cn, website of the People's Daily, reported on Wednesday.

China's contingency plan for urgent public health emergencies categorizes public emergency incidents from level one, the most serious level, to level four, a normal incident, based on the incident's nature, extent of harm and scope.