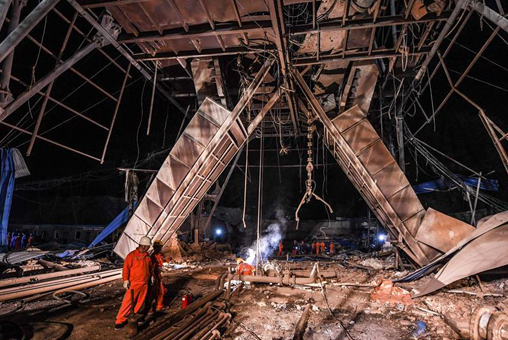 SHENYANG, June 6 (Xinhua) -- Twenty-three miners have been rescued after an iron mine blast in northeast China's Liaoning Province that killed 11 and injured nine, local authorities said Wednesday.
The blast occurred at 4:10 p.m. Tuesday when miners were dropping explosives down the 1,000-meter-deep mine shaft. The explosion killed 11 people, injured nine others above-ground, and destroyed the hoisting system in the mine, while trapping 25 miners underground.
The first batch of six miners were lifted out of the shaft at around 5:20 a.m., and another 17 were lifted as of 7:25 a.m. Wednesday.
Two others still remain missing. Search work is underway. All the rescued miners are in good conditions.
Five of the injured suffered heavy injuries and are receiving treatment in hospital.
Three rescue teams were dispatched by the provincial work safety bureau overnight. Power supply, ventilation and the hoisting system have been recovered.
The iron-ore mine in Sishanling Village, Benxi City, which is under construction by Huamei Group, is attached to Beijing Jianlong Group.