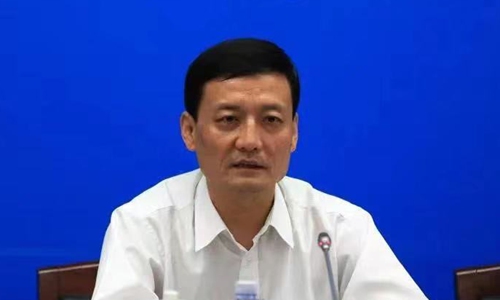 Xiao Yaqing, minister of industry and information technology, has been put under investigation for suspected violations of Party discipline and laws. Photo: CCDI Wechat account

A total of 25 senior Chinese officials, or centrally administered officials, have faced disciplinary actions so far this year, equaling a record annual number in recent years, underscoring the Communist Party of China (CPC)'s zero tolerance toward corruption and its intensifying efforts to fight corruption, experts said on Sunday.

On Thursday, the CPC Central Commission for Discipline Inspection (CCDI) and the National Supervisory Commission announced that Xiao Yaqing, minister of industry and information technology, has been put under investigation for suspected violations of Party discipline and laws. Xiao is the 25th centrally administered official - mostly above vice-ministerial level - who has faced disciplinary actions so far this year.

In the first half of this year, a total of 24 centrally administered officials have faced disciplinary actions, almost equaling the record number in the whole 2021, according to a list on the official website of the CCDI.

The anti-corruption situation in the first half of this year is characterized by an increase in the number of senior officials put under disciplinary investigation and an increase in the frequency of such actions, Zhuang Deshui, deputy director of the Research Center for Government Integrity-Building at Peking University, told the Global Times on Sunday.

This reflects the Party's strong political determination to crack down on corruption, and aims to eliminate the canker of corruption within the Party and create a clean political ecology, Zhuang noted.

Meanwhile, ahead of the Party's 20th National Congress, such intensifying efforts also convey the message that senior officials will be strictly selected so that truly outstanding officials will be promoted to important positions, the expert said.

A meeting of the Ministry of Industry and Information Technology on Friday also stated that the disciplinary probe into Xiao reflects the strong will of the CPC Central Committee to unswervingly promote comprehensive and strict governance of the Party, highlights the distinctive character of the Party's courage in self-reform, and is a strong signal that corruption will be punished with zero tolerance.

Xiao became the first head of a national ministry to be investigated this year, according to a China.org.cn report.

Xiao joined the CPC in December 1981 and graduated from Central South University majoring in Material Processing Engineering, with an on-the-job postgraduate degree, a doctorate in engineering, and is a professor-level senior engineer, China.org.cn reported on Friday. Xiao became the Minister of Industry and Information Technology in August 2020.

In addition to the rise in the number of senior officials put under disciplinary investigations, China's zero-tolerance anti-corruption efforts so far this year also covered important areas such as financial sectors, experts noted.

Ding Wenwu, general manager of the National Integrated Circuit Industry Investment Fund Co, became one of the latest executives of state-owned enterprises to be investigated. According to the CCDI, Ding is under disciplinary inspection on suspicion of serious violations of discipline and law.

In addition, Lu Jun, former deputy director of the fund management department of China Development Bank, was put under investigation for serious violations of discipline and law. Lu was also in the management of the National Integrated Circuit Industry Investment Fund Co, media outlet yicai.com reported on Saturday.

In the past half month, a number of people connected to the National Integrated Circuit Industry Investment Fund Co have been investigated, drawing a great deal of attention to the industry, the report said.

Zhuang said that corruption cases in the financial sector often involve huge amounts of money, which may bring financial risks to the country, and anti-corruption in the sector lays a solid foundation for the country to achieve stable and sustainable economic development in the long term.

The expert noted that with more problematic people being punished and more loopholes being exposed in the financial sector through anti-graft probes, China is likely to further reform its financial supervision system to better prevent financial risks.