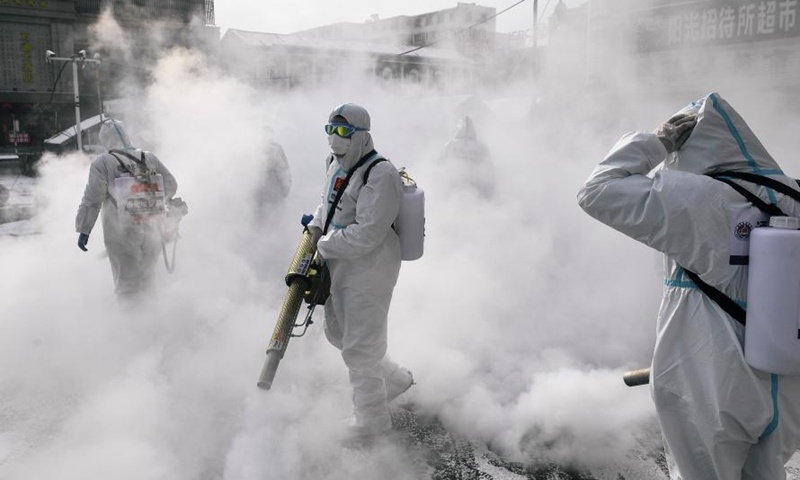 Staff members conduct disinfection. Disinfection in the public area were conducted as a COVID-19 prevention and control measure in preparation for work resumption. (Xinhua/Xu Chang)

In Harbin, the capital of Northeast China's Heilongjiang Province, 28 public servants have so far been held accountable for failing to perform their COVID-19 epidemic prevention and control duties after the city released a notice on January 19 requiring all departments to strictly follow the relevant preventive measures, according to a notice released on the local government's website on Monday.

Among the 28 public servants, six of them including policeman, commerce bureau officers were held seriously accountable as they failed to perform their duties; the rest have all received education on their inappropriate actions.

On January 19, Harbin released a notice indicating that the city's epidemic prevention had been successful. Despite Harbin being reduced to a low-risk area for the coronavirus, meaning prevention and control measures have become normalized, the pandemic has not ended yet, the notice released on Monday said, emphasizing prevention work must still be strictly implemented.

For example, some failed to supervise illegal operations in the bathhouses and karaoke bars under their jurisdiction.

At the end of January, the city suspended entertainment businesses after discovering a cluster of COVID-19 cases.