The 30-day countdown to the opening of the third China International Import Expo (CIIE) begins on Monday. More and more CIIE exhibits have become export products, and exhibitors have become investors. 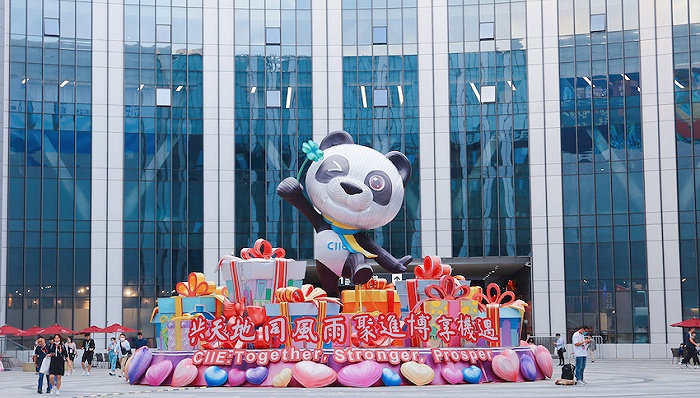 According to the CIIE Bureau, the contracted space of the third CIIE venue has exceeded the planned target and the number of Fortune 500 and industry-leading companies has kept pace with previous years. Most of the world's top ten best-known companies in pharmaceuticals, medical equipment, high-end consumer goods and automobiles have signed up to participate and dozens of companies have already booked a space for the next three CIIEs.

This year, Business France will participate as a corporate exhibition organization for the first time, setting up a 200-square-meter French food pavilion in the food and agricultural products exhibition area to showcase the richness, high quality and traceability of French agricultural food. The German exhibition organization AHK is occupying nearly 1,000 square meters with 37 exhibiting companies covering technical equipment, automobiles, consumer goods, and food and agricultural products.

In the context of epidemic prevention and control, the organizers have provided exhibitors with even more convenient and protective measures.

The Customs Declaration Hall of the Convention and Exhibition Center has set up a special window for the CIIE to pilot the paperless customs clearance of exhibits, and realize the seamless connection of online declaration and release. The CIIE Bureau and the Chinese National Exhibition and Convention Center (Shanghai) began arranging home transportation service providers to work on-site in August and set up "green channels" for air freight and cooperated with core support companies such as China Ocean Shipping Group (COSCO) and China Eastern Airlines in formulating emergency plans for the transportation of exhibits.

Preparations are well underway for next month. With COVID-19 battering global companies and bringing face-to-face meetings to a halt, experts say this year's CIIE could provide a much-needed shot in the arm and help them get operations back to normal again.

"In the first quarter of this year, we are almost facing a 'broken chain' crisis. The supply chain is overseas, and the sales end is in China. There are difficulties at both ends. The impact in the first quarter is very large, with a direct economic loss of more than 80 million yuan ($11.78 million)," said Sheng Wenhao, CEO of Theland Farm Group's Asia-Pacific region, during an interview with Shanghai United Media Group's Jiemian.

Sheng also revealed that in the second quarter, the company achieved 55 percent growth against the trend through Shanghai's consumption-themed festivals, and online business even achieved growth of more than 80 percent.

A series of local consumption-themed activities launched by the Shanghai Municipal People's Government and the spillover effects of the CIIE have enabled some overseas-owned companies previously affected by the coronavirus to turn losses into profits.

The Shanghai Municipal Commission of Commerce noted that in a drive to turn more and more exhibits into sustainable business contracts, "the first season of Embracing the Expo" will be held from October 8 to November 11.

At the same time, the city will hold "the first Shanghai Walking Street Festival" showcasing the commercial charm of the neighborhood and offering consumers the chance to experience the humanistic beauty of urban space in autumn.

"Shanghai will also launch a group of new Shanghai brands with leading and exemplary effects on the eve of the third CIIE" it added.

The third CIIE will be held in Shanghai from November 5 to November 10 and the five-day grand meeting is one of the most popular business events of the year.