CHINA 32 million rides made with ofo every day

32 million rides made with ofo every day 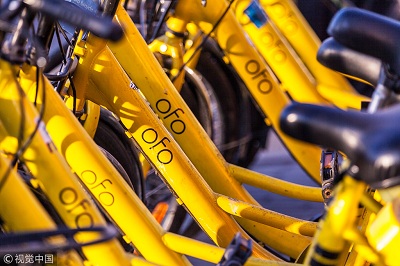 Chinese bike-sharing company ofo announced Wednesday that it now sees 32 million rides every day.
The company currently has 10 million shared bikes globally and 200 million users in 250 cities around the world, said Xiang Jigui, vice president of the company.
"Riding is a gigantic market. According to our calculation, ofo users could reach 2 billion in the future," he said in Chengdu, capital of Southwest China's Sichuan Province.
"Shared bikes could provide great space for development for the Internet of things. Imagine street lights turning on or off with the arrival of ofo-riders, or McDonald's preparing food based on rider-data to reduce the time of waiting in lines," he said.
China's bike-sharing industry reached a frenzy in less than three years. The two market leaders -- ofo and Mobike -- are both worth more than 10 billion yuan ($1.5 billion).