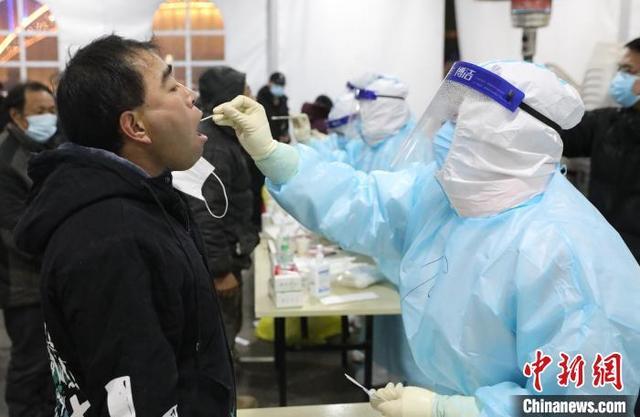 A medical worker collects a throat swab from a resident in Gu'an county, Langfang, Hebei province on Jan 12, 2021. (Photo: Chinanews.com)

Langfang city in Hebei province was put under lockdown on Tuesday with major transport to places outside the city suspended, after it detected a confirmed local COVID-19 case on Monday, Xu Jianpei, vice-governor of Hebei, said at a news conference on Tuesday afternoon.

The confirmed case is in Gu'an county, which is about 50 kilometers southwest of Beijing.

She is an employee of a company in the Xicheng district of Beijing and lives in a community in Gu'an. Since Dec 31, she had been to Shijiazhuang twice, and had commuted on Subway Line 4 in Beijing.

"Residents and vehicles are not allowed to go out of the three cities - Shijiazhuang, Xingtai and Langfang - if not necessary," Xu said.

As of 10 am Tuesday, Hebei reported 21 new local confirmed cases, with 16 in Shijiazhuang and five in Xingtai. After the new rise in infections, the province has a total of 326 confirmed cases and 234 asymptomatic carriers, Xu said.

About 70 percent of the confirmed cases live in rural areas, according to the conference.