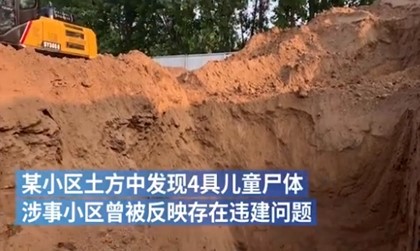 County officials in Central China's Henan Province said the people responsible for the illegal construction site where four children were found dead are in custody, and an investigation is underway.

The victims' bodies were discovered in a pit one meter below ground where it is believed the children suffocated to death.

Yuanyang county officials in Xinxiang announced on its official website the victims' bodies, ages five to 11, were discovered Saturday. A preliminary ruling determined the cause of death was suffocation.

As of press time, it was still unknown why the children were buried there.

The investigation results will be made public in a timely manner, according to the official announcement.

The Beijing News on Sunday launched an on-site livestreaming video event to report the tragedy. The children allegedly fell into a pit that did not have warning signs next to it and were surrounded by multiple ground projects.

One of the victims' relatives told reporters the bodies were still warm when they were discovered.

The victims, all boys, included two brothers, whose father, surnamed Liu said the other two were his nephew and a neighbor's son, the Paper reported.

Prior to the discovery, netizens had complained about the company in charge of the construction project.

On April 9, one netizen expressed concern the project had not received official approval, which local officials responded to on Thursday. Another netizen who also complained about the site was told by officials that relevant authorities were investigating the matter.

News of the tragedy went viral as netizens across the country urged local authorities to find the truth and punish those responsibly.