CHINA 40 years' path: how far everyone in China goes each year

40 years' path: how far everyone in China goes each year

1978-2018, Chinese society has undergone earth-shaking changes. These 40 years are destined to be an extraordinary 40 years in Chinese history because of the reform and opening up policy.

China has been taking a long journey towards openness and connectedness, and so has everyone here. The ever-developing trains, roads and airports not only bring together Chinese people who live miles from each other, but also let them go out of their towns and cities, towards a bigger world.

This journey is great for the country, and also for the Chinese people. China had a GDP surpassing 80 trillion yuan ($11.58 trillion) in 2017, from 367.9 billion yuan 40 years ago. Some 740 million impoverished people in rural areas have now become the largest middle-income group in the world. In 2017, China's railway length will be about 127,000 kilometers. In the early stage of reform and opening up, the railway was 51,700 kilometers, while in 1957 after the founding of the People's Republic of China, it was 26,300 kilometers. 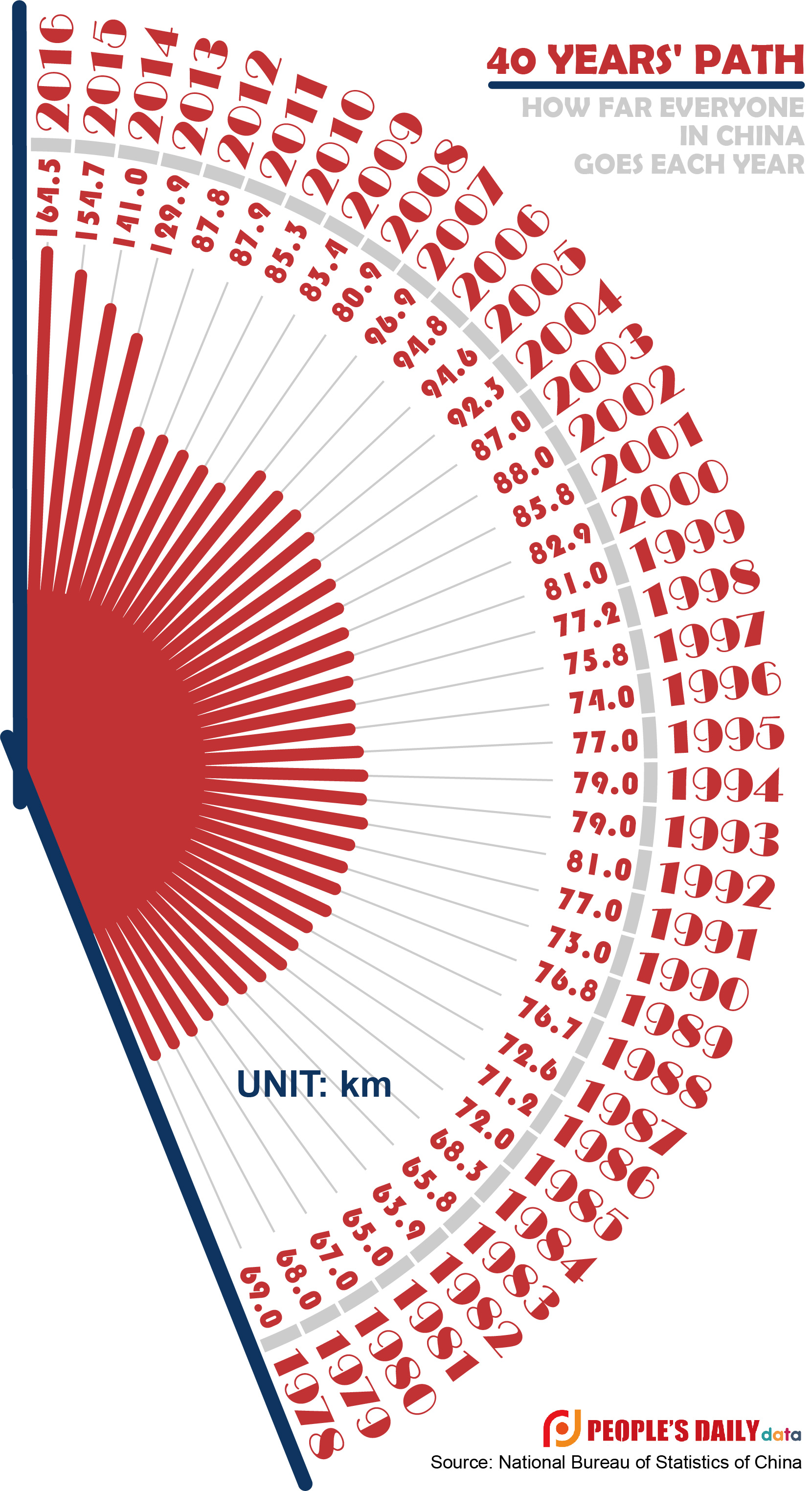 How far, on average, does everyone in China go each year? People's Daily has compared the average travel distance by each passenger in China each year from China's National Bureau of Statistics. It turns out that it is more than twice the distance compared with four decades ago.

On average in 2016, every passenger in China traveled 164.5 kilometers, nearly the distance between Beijing and Tianjin. Back in 1978, when China started its reform and opening up policy, it was only 40 percent of that.

A sharp increase was seen since the 18th CPC National Congress held in 2012, after a period of gradual improvement. The 2016 figure was double that of 2012, which is 88 kilometers.

Here is a breakdown of the average distance traveled by each passenger in China each year by all types of transport.

After years of exploration, China's airline industry has stepped into steady growth with a promising future. In 2009, the Beijing Capital International Airport rose from the world's 8th to among the top three in terms of annual passenger throughput. 2009 also marked the beginning of regular direct flights between the Chinese mainland and Taiwan, after the first direct flight was launched on December 15, 2008.

High-speed trains, now running as fast as 350 kilometers per hour, drive China's economy and society towards modernization. In 2016, each passenger traveled 447 kilometers, an increase of 234 percent compared to 1978. Due to security concerns and increasing competition with airlines, the railway industry has made adjustments in its rapid development.

Forty years on, the average distance traveled by cars has improved 88 percent.

While air, rail and road transportation have seen significant development, the competitiveness of water has declined over the 40 years.

The "average travel distance by each passenger in China each year," is the result of annual passenger turnover divided by passenger traffic, according to National Bureau of Statistics.