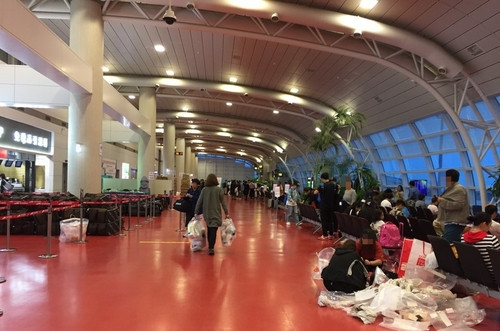 Five people working in a duty free shop at Jeju International Airport, South Korea have been transferred to prosecutors for appropriating the belongings of a Chinese customer, according to a recent Jujunews report.

They will be charged with special larceny after they privately claimed the 800,000 won (about 4,800 yuan) worth of property of the Chinese customer in late September, reports said.

The 30-year-old Chinese tourist, surnamed Yang, first purchased commodities in downtown area and then collected her orders at a duty free shop in the airport on September 27. Meanwhile, she left behind her purchases at the shop and returned to China on the same day.

After realizing her loss, Yang made a phone call to Jeju police on September 28. Surveillance video showed that Park and other four shop clerks embezzled the windfall.

All the five clerks were then detained by local police, according to reports.

Jejunews said that the five people were staff from South Korean duty free shop association, who had all been dismissed for their wrongdoing. Korea Customs Service also noted such villainy should be banned and it is necessary to reinforce legal education to duty free shop staffs.

Special larceny refers to an unlawful taking of the personal property of another person or business committed by more than two people. According to South Korea's Criminal Act, the punishment for larceny is imprisonment a minimum of 1 year and no more than 10 years. When a definite term of imprisonment is imposed, a suspension of qualifications for not more than 10 years may be imposed.

Statistics showed that Chinese tourists account half of the foreign visitors to South Korea in 2016.