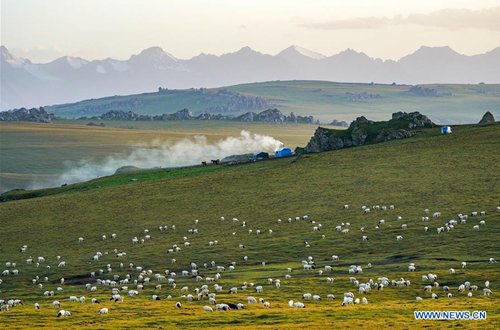 Oilfield explorers have confirmed that there are 500 million tons of high-quality light crude oil and natural gas resources in the eastern part of the Junggar Basin in Northwest's China's Xinjiang Uygur Autonomous Region.

The Junggar Basin is one of the largest sedimentary basins in Northwest China and contains the third-largest petroleum reservoirs in China. The basin is also rich in coal and ore deposits. In June, a research team found footprints from the largest species of Asianopodus in the basin.

The Junggar Basin has great potential for oil and gas resource exploration, and is an important alternative area for the development of crude oil production and China's petroleum reserves. Oil and gas exploration in the Junggar Basin has been accelerating in recent years. Over 1 billion tons of reserves have been discovered in the Mahu area, with a daily production level of 5,942 tons of crude oil, the Xinhua News Agency reported.