SHANGHAI, April 14 (Xinhua) -- A China-U.S. Ping-Pong friendly match was held in Shanghai recently to commemorate the 50th anniversary of the "Ping-Pong Diplomacy" between the two countries. 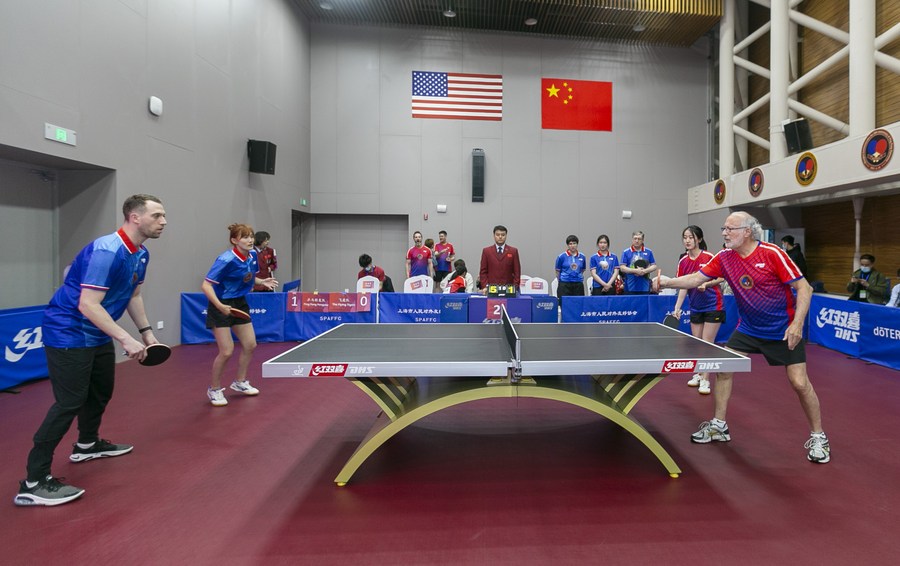 Players from China and the United States take part in a friendly match to commemorate the 50th anniversary of the Ping-Pong Diplomacy at the International Table Tennis Federation Museum in Shanghai, east China, April 10, 2021. (Photo: Xinhua)

Sha Hailin, chairman of the Shanghai People's Association for Friendship with Foreign Countries, was one of the participants in the friendly match.

"Some American friends showed great interest in signing up for the match or becoming cheerleaders and sponsors though they may not be good at playing ping-pong," Sha told Xinhua.

According to Sha, it was the first time for some people to even touch a ping-pong racket. "Their enthusiasm makes me feel the real need for exchanges between the Chinese and American people."

He said earlier this year he had a conversation with the head of the American Chamber of Commerce in Shanghai (AmCham Shanghai), who proposed to hold a commemorative event on the 50th anniversary of "Ping-Pong Diplomacy."

"The proposal was in line with our ideas, which showed that the China-U.S. friendship has a solid foundation at the grassroots level," Sha added.

Fifty years ago, the U.S. table tennis team was invited by its Chinese counterpart to visit China at the conclusion of the 31st World Championships in Nagoya, Japan. The U.S. players arrived on April 10, 1971, to commence their visit to China, becoming the first U.S. group to visit since the founding of the People's Republic of China in 1949. 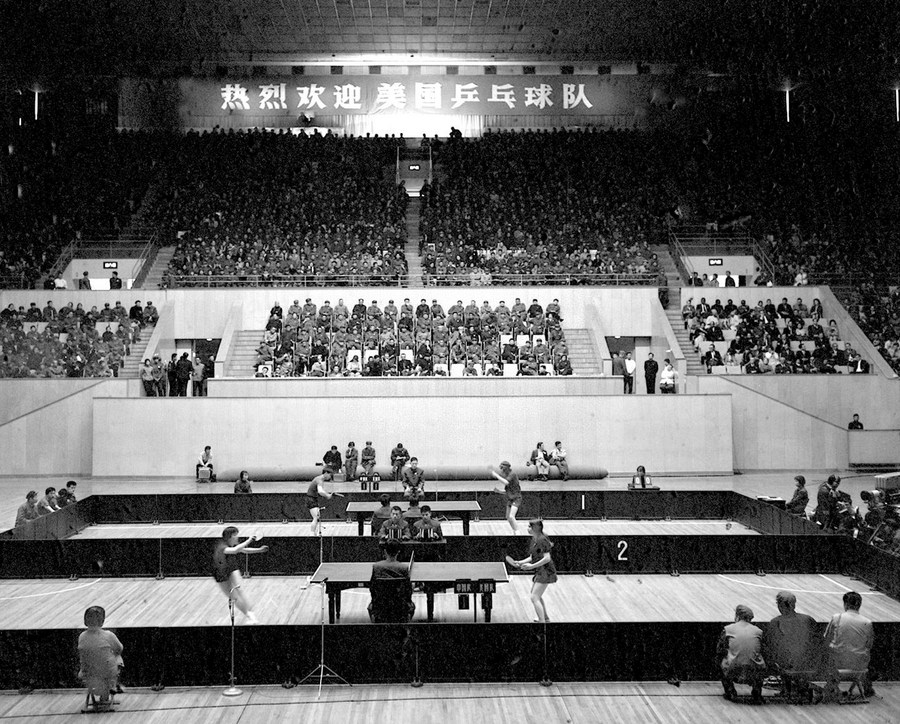 The Chinese team paid a return visit the following year. The mutual visits broke the ice in two decades of estranged China-U.S. relations and eventually led to the normalization of bilateral ties.

In the commemorative match in Shanghai, the 64-year-old Sha had paired up with Ker Gibbs, president of the AmCham Shanghai, just as more than 20 other Chinese and American players did. The idea behind this mixed team formation was to highlight the theme of "friendship first, competition second" and convey the significance of cooperation rather than confrontation.

"The development of the China-U.S. relations has not been smooth during the past five decades. Though it has encountered ups and downs, twists and turns and even major setbacks, cooperation is the mainstream," said Sha, suggesting that the two countries should have the wisdom and courage to seek common ground while shelving differences.

Recalling an interesting incident from the match, Sha said an American participant, who had once watched matches of the Chinese team when they visited the United States in 1972, met one of the Chinese players after 50 years.

Sha added that both the American participant and the former Chinese player reminisced their shared memories, reflecting real grassroots exchanges between China and the United States.

"The commemoration of the 50th anniversary of 'Ping-Pong Diplomacy' is to trace the original aspiration and deepen exchanges and cooperation between the two countries in order to benefit each other and the rest of the world," Sha said.

According to Sha, in addition to the friendly match, a series of interviews and special reports are also included in the schedule for the commemoration. Following Shanghai, other Chinese cities including Guangzhou and Beijing will also hold commemorative events.

The Chinese and American people need peace and cooperation, said Sha, adding that he hopes China's sincerity and goodwill in hosting the "Ping-Pong Diplomacy" commemorative events will encourage people in the two countries to work together in consolidating and developing the China-U.S. relations.