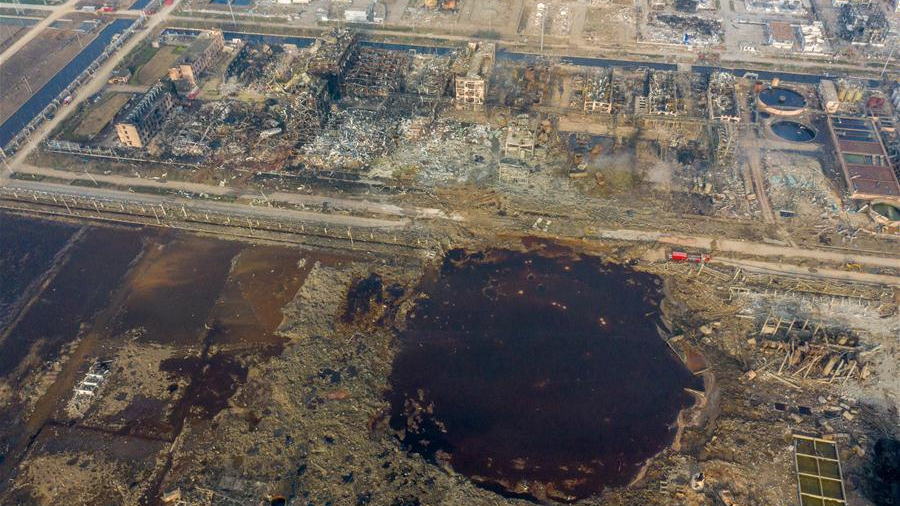 NANJING, Nov. 30 (Xinhua) -- Local courts in east China's Jiangsu Province on Monday handed down sentences to 53 defendants for their involvement in a chemical plant explosion that killed 78 people and severely injured 76 others last year.

The explosion occurred on March 21, 2019, after a fire broke out in a chemical plant owned by Jiangsu Tianjiayi Chemical Co., Ltd. in Xiangshui County of Yancheng City.

Investigations attributed the blast to the spontaneous ignition of nitrified waste, which was illegally stored for protracted periods of time, according to the Intermediate People's Court of Yancheng and seven lower-level courts in the city.

The Yancheng municipal environmental monitoring center and five other organizations were found to have provided fake documents to cover up major safety risks at the chemical plant and mislead regulatory authorities.

Investigations also found serious dereliction of duty on the part of some public servants from the local environmental protection and emergency management authorities.

The Yancheng municipal environmental monitoring center and five other organizations each were fined between 100,000 yuan and 1 million yuan for providing fake or inaccurate documents. A total of 22 people from the organizations were sentenced to up to four years.

Fifteen public servants received jail terms ranging from three and quarter years to seven and half years for dereliction of duty or taking bribes.

Most of the defendants, including Zhang, pleaded guilty and did not appeal.

The deadly blast had caused a direct economic loss of about 1.99 billion yuan.