XIANGSHUI, Jiangsu, March 24 (Xinhua) -- A total of 59 people have been discharged from hospitals after a blast hit a chemical plant in east China's Jiangsu Province Thursday, according to the rescue headquarters. 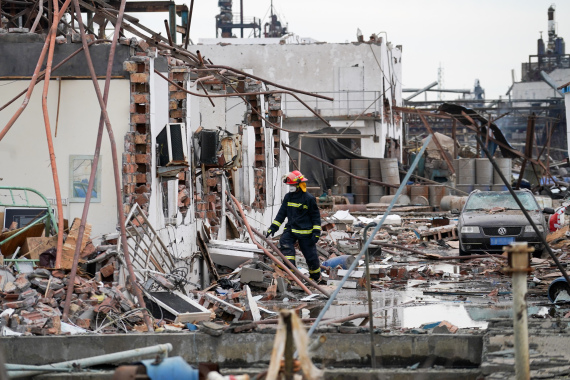 A rescuer works at the site of an explosion at a chemical industrial park in Xiangshui County of Yancheng, east China's Jiangsu Province, March 22, 2019. (Photos: Xinhua)

As of 12 pm Sunday, 604 patients, including 117 severely injured ones, remain in 16 hospitals in Yancheng, Li Shaodong, vice director of the province's health commission, told a press conference.

More than 4,500 medical workers, including top-notch experts from other parts of the country, have participated in the rescue. Experts have held 1,579 consultations for the patients and performed 219 surgeries, said Li.

The explosion happened at about 2:48 pm Thursday following a fire that broke out in a plant owned by Jiangsu Tianjiayi Chemical Co. Ltd., in a chemical industrial park in Xiangshui County in Yancheng.

The death toll stood at 64 on Saturday, according to authorities.

Cover image: Doctors look at examine results of the injured people of a factory explosion at the intensive care unit in the First People's Hospital of Yancheng in Yancheng, east China's Jiangsu Province, March 23, 2019.