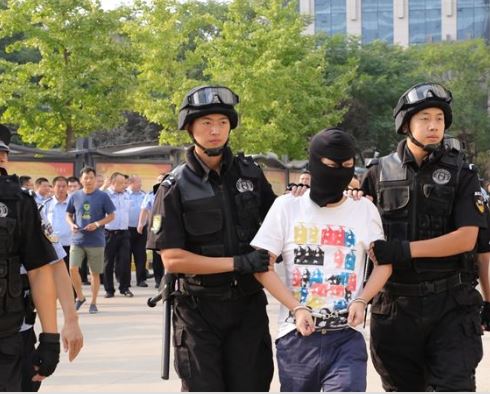 Police in Xi'an, northwestern Shaanxi Province takes away one of the suspects on August 15, 2018. (Photo: Huashang News, www.hsw.cn)

Police in northwest China have arrested three men on suspicion of masterminding a 600 million yuan ($87 million) cryptocurrency hack attack in the biggest recorded case of its kind in China, according to China Media Group.

In a case dating back to March, police in Xi'an, northwestern Shaanxi Province, arrested the trio last Wednesday after an investigation that spanned the country and saw the criminals use complex hacking technology to cover their tracks.

The report by China Media Group, a broadcasting platform made up of China Central Television (CCTV), China Radio International (CRI) and China National Radio (CNR) that was inaugurated earlier this year, said that police were first alerted to the case on March 30, when a man reported his computer being hacked.

The victim went to a police station in Xi’an to report that more than 100 million yuan ($14.6 million) worth of cryptocurrencies had been taken overnight.

Zhang Xianli, the director of the police station, told China Media Group that given the scale of the crime, Shaanxi Province had not dealt with such a large computer-crime case for several years.

The criminals used a series of proxy servers based in several countries overseas to cover their tracks and split the stolen funds layer-by-layer, leaving police with more than 30,000 separate strains of evidence to investigate, according to China Media Group.

Using resources and platforms based in China and abroad, police were eventually able to track down and identify the three suspects, who were based thousands of kilometers apart and described as belonging to a “highly intelligent criminal gang.”

According to China Media Group, the first half of this year saw $731 million worth of cryptocurrencies stolen worldwide through hacking.

Chinese authorities have cracked several significant fraud and hacking cases concerning cryptocurrencies, while the biggest reported international hack hit Japan in January after $530 million worth of virtual currency was stolen by hackers from crypto exchange Coincheck.