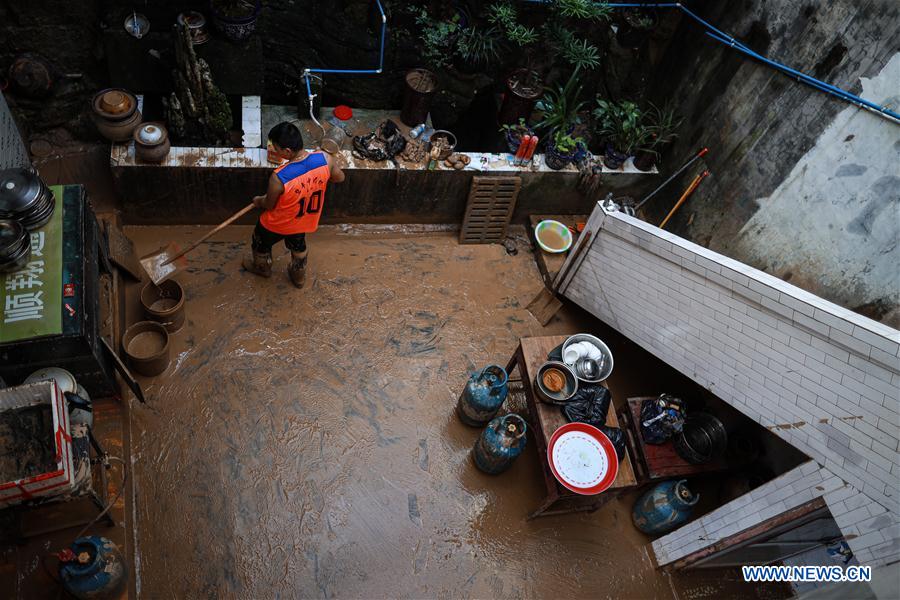 At least 63 people have been killed or are missing and almost 500,000 have been evacuated as downpours continue to batter southern parts of the country, unleashing wide-ranging floods, according to the Ministry of Emergency Management.

As of Monday, almost 8.5 million people in 24 provincial regions have suffered rain-triggered floods, which also caused direct economic losses of some 20.7 billion yuan ($2.9 billion), it said.

The flood control situation remains grim as the national observatory renewed a blue alert-the lowest in a four-tier color-coded weather warning system-for rainstorms at 10 am Monday.

For the 24 hours starting at 2 pm Monday, heavy rain and rainstorms are forecast in some areas in 14 provincial regions, including Zhejiang, Yunnan, Sichuan, Hubei, Gansu and Henan provinces. The precipitation in the affected areas could be up to 15 centimeters, the National Meteorological Center said.

The maximum hourly precipitation in these areas is expected to exceed 7 centimeters.

Local authorities should remain alert for possible flooding, landslides and mudslides caused by heavy rains, and outdoor operations should be halted in hazardous areas.

Chen Tao, chief forecaster with the National Meteorological Center, said the new round of rainfall is expected to last until Thursday, and the maximum accumulated precipitation could be up to 40 centimeters.

"The heaviest precipitation will occur from Tuesday to Wednesday. The precipitation in areas along the Huaihe River and the areas between it and the Yangtze River will be long-lasting with high intensity," he said, adding much of the rainfall will occur at night.

The new round of precipitation is expected to feature strong convective weather, which is characterized by strong winds, hail, thunderstorms and brief but heavy rainfall, and will engulf some areas that experienced downpours after Thursday, which will increase flood hazards, he said.

The new rainfall, for example, will envelop some of the areas that had been stricken by two rounds of precipitation in Henan, worsening the flood control situation in the province's section of the Yellow River, according to Henan Meteorological Administration.

Previously, areas along and south of the Yellow River had received accumulated precipitation of over 5 centimeters since June 9, it said.

Chen said, however, the coming rain will greatly relieve the drought in areas between the Yellow River and Huaihe River and Shaanxi province.

The country will confront a grim flood control situation during this rainy season with higher precipitation than normal years, according to the Ministry of Water Resources.

As of Thursday, the accumulated precipitation across the country this year has been 6 percent more than the same period in recent years.

Meanwhile, 148 rivers have been stricken by floods that raised water above their warning levels, the ministry said in a media release.