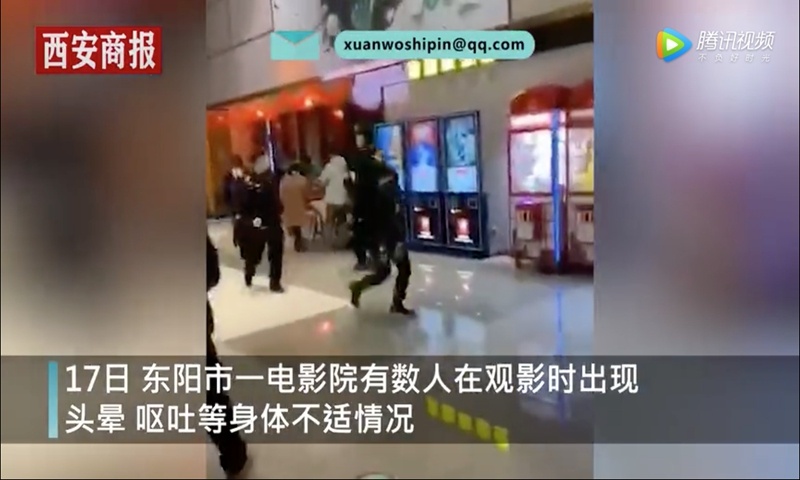 Screenshot taken from a video of the incident

A total of 63 moviegoers in a cinema in Dongyang city of East China's Zhejiang Province were poisoned after being exposed to excessive levels of carbon monoxide while watching a movie on Wednesday evening, local police confirmed with the Global Times on Thursday.

The patients were immediately rushed to hospital after suffering from symptoms such as fainting, vomiting and other physical discomforts around 6 pm while watching a movie in one of the halls of the New Square Movie Theater in Weishan town of Dongyang city.

The cinema was only recently built, according to a police officer surnamed Ma.

A preliminary judgment based on the physical state of the patients combined with an inspection of the environment showed that the situation was caused by excessive levels of carbon monoxide.

Currently, none of the hospitalized people are suffering from life-threatening injuries. The movie theater has since suspended its operations while the cause of the accident is being investigated.

The incident quickly became a trending topic on China's Twitter-like Sina Weibo, with many Chinese netizens concerned about the safety of the people and the cinema, and questioning why carbon monoxide would be found inside the cinema.

One netizen pointed out that the cinema should be held responsible as an enclosed venue with poor ventilation during the pandemic.