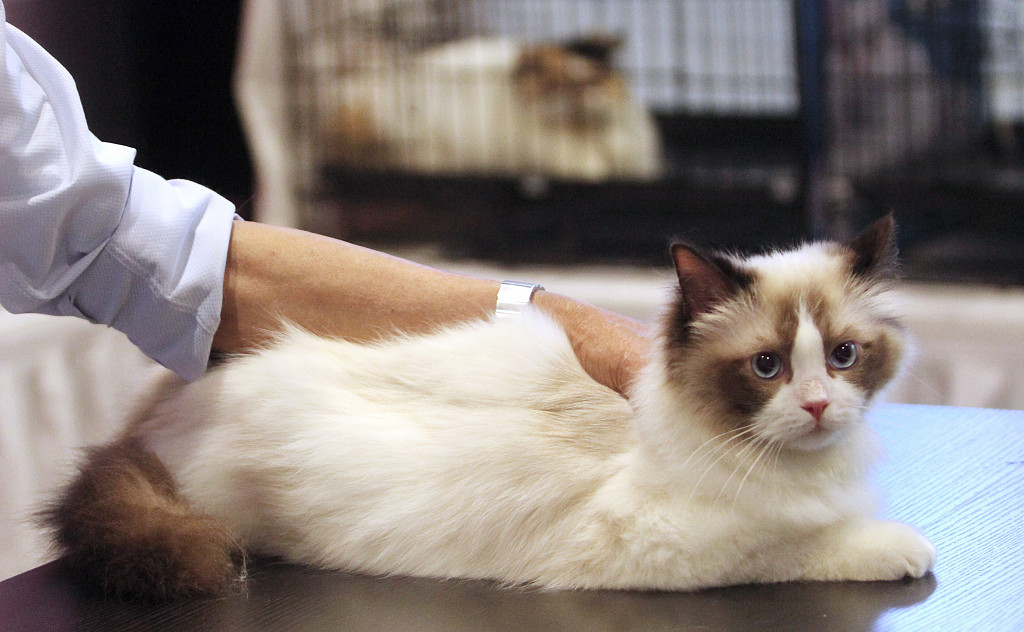 A purr-fect world, and loads of money－that's what cafe chain Starbucks sees at least in its newest merchandise item.

The new product was necessitated by China's growing pet economy, where sales of pet-related products and services reached 172.2 billion yuan in 2018.

Consulting firm Frost & Sullivan China said in a recent report that last year's market size was three times that of 2013, and forecast it would grow to 472.3 billion yuan by 2023.

The pet cat market segment, worth 60 billion yuan, is the second largest after the pet dog segment (98.5 billion yuan). It is predicted to be the most vibrant one.

Small wonder, Starbucks thought it fit to launch a specialty product aimed at this market. But even it may not have anticipated the tremendous response.

The moment Starbucks launched its limited-edition "cat-paw cup", it sparked a frenzy among Chinese consumers who own pet cats.

In scenes reminiscent of the pre-launch serpentine queues for snob-value smartphones, cat-owners stayed up all night in queues in front of Starbucks stores across Chinese cities a day before the cup's formal sales launch on Feb 26.

Some female pet-owners, exasperated by the seemingly never-ending wait, got into cat-fights, while others indulged in slanging matches on learning the cups were in short supply.

The craze and high demand were attributable to slick videos and images posted on social media by key opinion leaders or KOLs, or influencers, market insiders said.

On Feb 28, Starbucks organized an online competition－a flash sale, if you will－for the limited-edition cups. Consumers would wait in front of their computers for long hours just to click "buy" several times in quick succession over a period of four days to March 3.

Only, millions of their ilk would also do the same thing at the same time. This meant, most of their attempts were destined to prove unsuccessful as buyers vastly outnumbered the special cups on sale. The cat-cups were sold out in nanoseconds after the sale opened.

Disappointed consumers accused Starbucks of resorting to "hunger marketing", a strategy to drive up demand by deliberately limiting supply, a charge that the cafe chain denied.

The Starbucks cup episode is the latest proof that pets, particularly cats, are stoking big-ticket spending among affluent consumers in China, an economy that is witnessing consumption upgrade across all sectors－a topic close to the hearts of the Chinese lawmakers and political advisers who attended the annual sessions of the country' top legislature and top political advisory body this month.

Reasons abound as to why the cat economy is flourishing in China. For one, pet cats are good stress-busters. And in these hectic, stressful times in urban areas, they could prove very useful, experts said.

Agreed Huang Xinyi, 28, a Beijing-based film producer. "Every time my cat purrs at me, head-butts my face, and rubs against my leg, I want to hug him and kiss him all over."

Many of her generation, aged 25 to 35, are busy pursuing busy careers in cities, far from their hometowns. "I get lonely sometimes, but my cat has always been good company," Huang said.

"Moreover, cats are more independent. I don't have to walk my cat every day, but I play with him whenever I find some spare time."

That is important for most young people struggling to find work-life balance in urban areas due to hectic lifestyles.

According to a report from Frost & Sullivan China, keeping cats for pets costs a little less than maintaining dogs.

Cat-owners spend about 3,117 yuan per cat each year on average, while the corresponding number for a dog is 4,723 yuan, said the report.

Much of a pet's expenses are on food. For a cat, it is about 1,340 yuan, with medical care requiring 742 yuan on average.

"About 41 percent of the 99.8 million pet-keeping Chinese households now have cats, and the number is still growing," said Neil Wang, president of Frost & Sullivan China.

In addition to 67 million pet cats, there are more, adopted or given by friends and families, the company's report said.

This has spawned a cat culture of sorts, spanning a variety of business activities.

For instance, specialist apps offer a service called "cloud petting" for those who do not own a pet cat. The latter can follow "cat celebrities" on social media platforms.

"Erdou" and "Guazi" are two such cat celebrities on Douyin, one of China's most popular video-sharing platforms. They are owned by the same person who posts their videos on an account called "Liu Erdou who can speak".

The account manager began to receive advertising opportunities from recognized brands. The latter requested her to endorse certain products in her short videos.

That's just one form of making money in the cat economy.

Many people are making products, or offering services, that make cats' lives fancier, and their owners happier.

An electric scalp massager retails for about 120 yuan, and a FURminator (cat grooming comb) for over 100 yuan, with a freebie thrown in, in the form of a comb for the cat owner! Then, there is an indoor slide for 300 yuan, all kinds of beds, what have you.

Still, they are just the tip of the cat economy iceberg. Medical care, theme parks, pet boarding services are expanding the sector.

The Spring Festival holiday in February was a peak period for such services as more pet owners tended to make use of luxury pet hotels as ordinary boarding kennels were overbooked.

Beijing-based Liu Ronghuan, 35, a college teacher, said she was quite satisfied with the pet hotel she chose for her cat.

"Compared with the price, I cared more about whether my cat was having an enjoyable time during the family reunion time," Liu said.