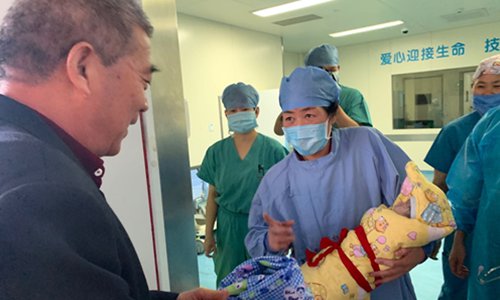 The doctor delivers the new-born baby girl to her 68-year-old father at the hospital in Zaozhuang, East China's Shandong Province on October 25, 2019.  (Photo: IC)

A headline-grabbing 67-year-old mother and her 68-year old husband could be fined for their third child as in China the current policy permits a maximum of two.

Shandong Province regulations restrict all couples to two children, the exception could be made if the children are physically impaired or born through ex-spouses.

Couples who violate these rules face a fine that is calculated according to a city's average income and the number of children.

The age-defying birth on October 25 in the East China city of Zaozhuang yet provoked more heated debate online over whether the couple should be fined.

Husband Huang Weiping said they had not thought about the fine, but he believed the regulation only applies to reproductive women up to 49 years old and therefore his much-older wife should be exempted.

Huang's case was under review, said an official at Zaozhuang health commission in charge of family planning affairs.

"The commission will decide whether the fine should be applied after checking information about the couple's previous two children," the anonymous official was quoted as saying by Shanghai-based news portal The Paper.

The Chinese internet was ostensibly unsympathetic to the couple's penalty.

"The couple should take the consequences now that they chose to give birth at such an age," was one typical post.

Meanwhile, the husband and wife face another barrier when they try to register their baby girl's hukou, or household registration because they had lost their marriage certificates decades ago.

The government official registered the information for the baby girl but asked the couple to re-submit marriage materials for a new certificate to finish the procedure.

Some internet users have congratulated the couple for the birth but others sympathized with their adult children, saying the newborn would likely burden them when the parents grew elderly and infirm.

Neither of the couple's first two children, both in their 40s, went to the hospital or their house after the childbirth.

The adult son and daughter were both upset with their parents upon learning their mother was pregnant, news site iqilu.com reported.