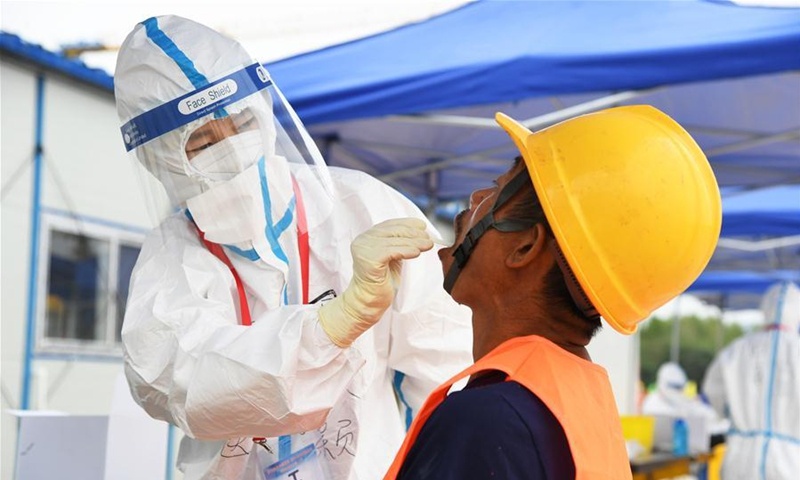 Beijing had taken samples from 8.29 million of its residents as of Sunday, of which 7.68 million completed nucleic acid testing, meaning that 38.4 percent of the capital's total population has been tested for coronavirus.

After confirmed cases in the capital dropped to double-digit numbers within three weeks, health experts announced that Beijing has entered a "control period," where new infections will continue to drop and soon fall to zero as Beijing has already experienced two incubation periods.

The city's massive nucleic testing scale and strict prevention measures have helped round up everyone who needs to be tested.

Unlike Wuhan's city-wide test, which served to answer the question of whether the epidemic area was safe, Beijing's massive testing, which was conducted in an orderly fashion, extended from small groups at Xinfadi market to city-wide key groups. This approach helped curb the spread of the virus and support the effort to trace the origins of the outbreak, said Wang.

More than 100,000 students, faculty and staff at Beijing's universities will have competed nucleic acid testing as of Sunday, after a city-wide COVID-19 testing operation was conducted within 36 hours, involving 20 different medical institutions.

As of Friday, a total of 1.65 million people had taken nucleic acid tests in Beijing's Daxing district. Further, 12,350 out of the city's 26,286 tested beauty salons returned negative test results as of Friday night, media reported.

To satisfy the city's demand for massive COVID-19 sample testing and ensure convenience to residents at the same time, Beijing also plans to deploy mobile equipment to collect samples, such as makeshift COVID-19 testing sites.

Beijing's testing capacity has soared from 40,000 samples on June 11 to maximum of 1.08 million samples per day as of now, said Zhang.

The first mode has been widely used in Beijing's screening sites, and will not affect the sensitivity of the test, according to the NHC.

But Wang warned that while sample pooling can be used for community scale tests, for close contacts of confirmed cases or even infection cases, single-person testing is necessary as samples are diluted in the pool, and their sensitivity will be affected to some extent.

Currently, if someone tests negative for nucleic acid, it means that they're safe, said Wu Zunyou, chief epidemiologist at the Chinese Center for Disease Control and Prevention. To address public concerns over someone who tested negative but was later confirmed to have contracted the virus, Wu dismissed the possibility of contagion of such groups of people.

"If someone was infected but could not be tested via throat swab, the possibility of passing the virus to others through breath is very slim," said Wu, admitting that more testing methods are necessary for key groups of people.

The city has also lowered the price for nucleic acid tests from 180 yuan ($26.8) to 120 yuan per person. Du Xing, an official from Beijing's health insurance bureau, said at the press conference that the medical expenses of those who require tests should be shouldered by the government.

Those who want to voluntarily complete the test should have to pay themselves.