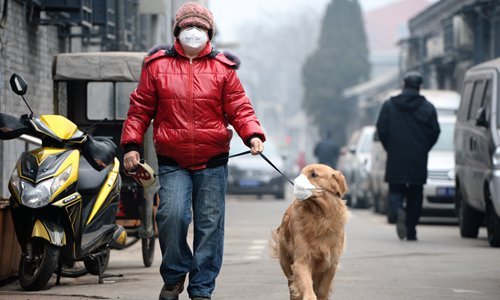 A man in his 70s, surnamed Hu, in Huainan, East China's Anhui Province, was given a three-year suspended sentence for poisoning 22 pet dogs in his community, Legal Daily reported on Sunday.

Hu and his wife suffer from high blood pressure and heart disease and couldn't sleep because of the dog barking in their community at night. The court found that Hu mixed rat poison into the leftovers and placed them in his community's square in the community, causing the death of 22 dogs.

The People's Court of Datong district in Huainan sentenced Hu to three years in prison and suspended for three years for throwing dangerous substances in the poisoning dog case.

After the incident, Hu compensated 18 dogs' owners for economic losses totaling more than 50,000 yuan, and obtained their understanding.

Although Hu only intended to poison the pet dogs in the community and did not intentionally injure people, children or other small animals in the community could have been poisoned by mistake. It brought great threat to the life, health and property safety of others. His behavior meets the definition of the crime of throwing dangerous substances, according to the court.

The judge also reminded dog owners to manage their pets well. They should walk their dogs on a leash and stop them from barking.