China's State Council Information Office on Friday issued a white paper titled "China and the World in the New Era."

The document showcases the country's status quo in all dimensions, how it has progressed from dire poverty to middle income levels over the past seven decades, and its role as a public good provider to the rest of the world.

Ascension to a world economic titan

In 1978, China opened its door for business, heralding a period of high-speed growth that would profoundly transform the global economy. China has since then become a key driver of world economy with annual GDP growth at 9.4 percent on average. From 2000 to 2017, China contributed 35 percent of the total global manufacturing output, making the country the "factory of the world."

With its 900-million-strong labor force and a middle-income population of 400 million, China is the biggest market in the world with ample investment opportunities and consumption potential. In the next 15 years, China is expected to import goods and services worth three trillion and one trillion respectively. 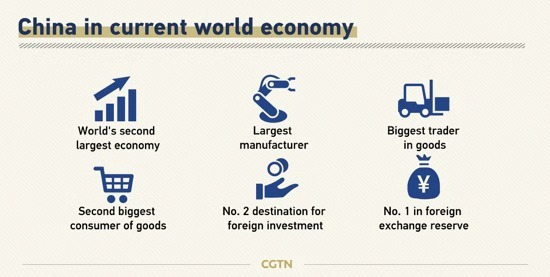 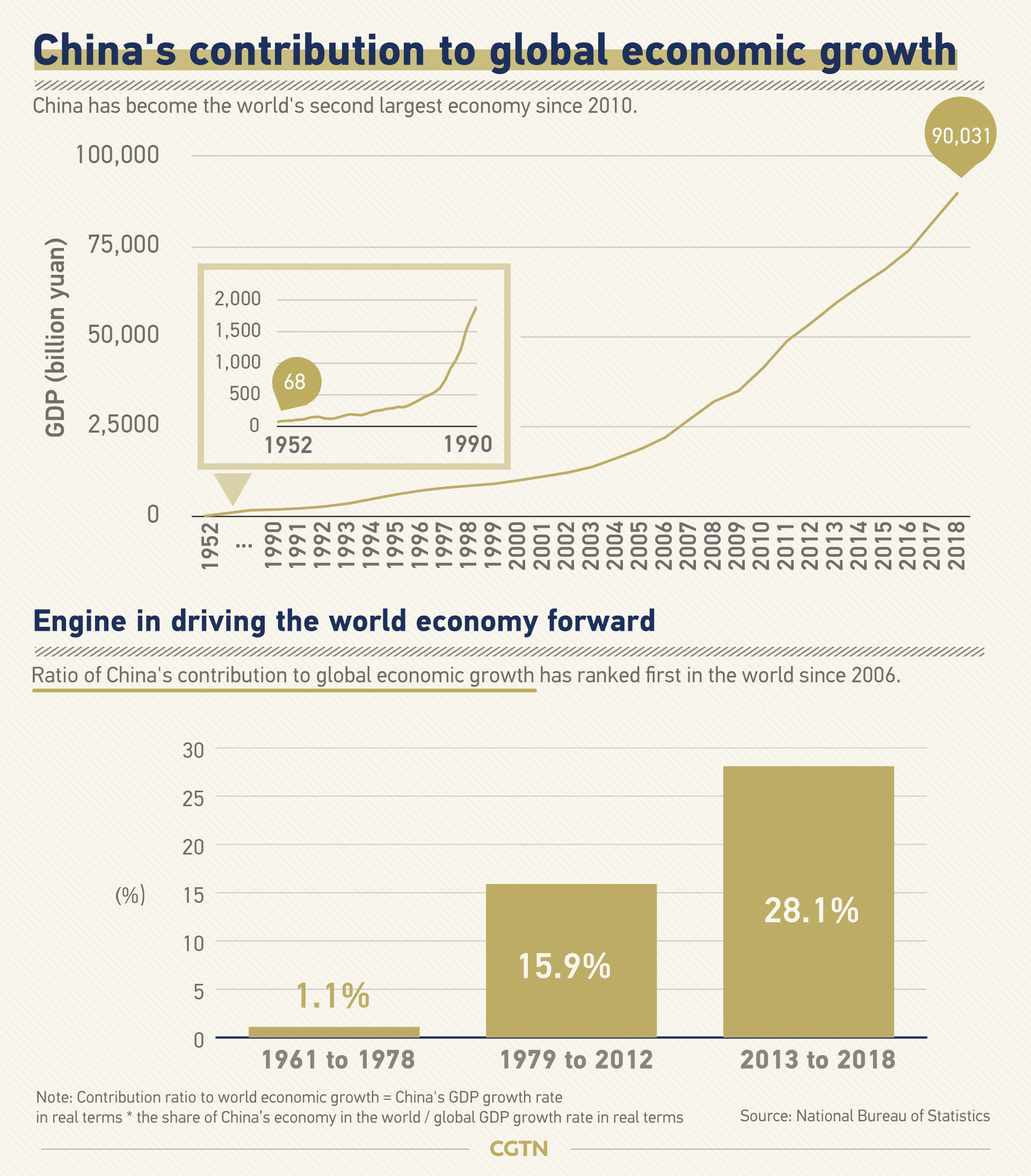 In the years after the founding of the People's Republic of China, a major concern of most Chinese people was whether they could feed themselves. Fighting off hunger and cold was a luxury for more than a decade from 1949 to the 1960s. Abject poverty began encroaching on the lives of the Chinese people, a majority of whom were back then living on rural lands.

By the end of 1978, the proportion of rural population living below the poverty line was 97.5 percent, or 770 million people. Reform and opening-up initiated in the same year precipitated a host of poverty relief policies. Throughout the past four decades, China has waged an unprecedented, lengthy war against poverty.

In 2018, the impoverished rural population dropped to 16.6 million – 1.7 percent of the Chinese population. The decline of 95.8 percentage points was a miracle in the human history of poverty alleviation.

World Bank statistics show that over the past 40 years, the number of people in China living below the international poverty line has dropped by more than 850 million. 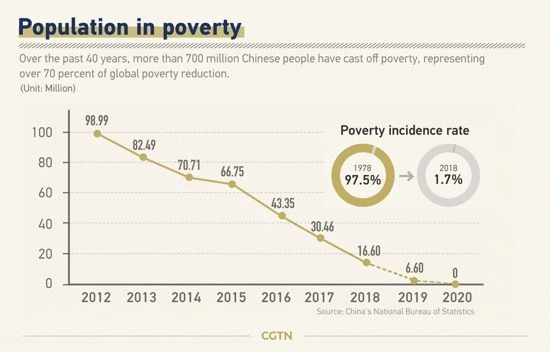 Meanwhile, the average annual Chinese disposable per capita income has been on the rise, from 98 yuan in 1956 to 171 yuan in 1978 to 28,228 yuan last year. That translates to an annual increase of 6.1 percent on an inflation-adjusted basis.

Apart from economic indicators, the average life expectancy of the Chinese people has more than doubled over the past 70 years: from 35 years around 1950 to 65 years in 1980 and to 77 years in 2018. Advances in pharmaceuticals and medical technologies not only played a role in extending lifespans but also in fewer infant mortalities.

The infant mortality rate in China has dropped from 200 deaths per 1,000 live births to 48 per 1,000 in 1980 and to 6.1 deaths per 1,000 in 2018. Maternal mortality has declined nearly tenfold. The dramatic declines are partly due to the introduction of real-time ultrasound and MRI machines, among other medical and operation technologies, thanks to the opening-up policy. 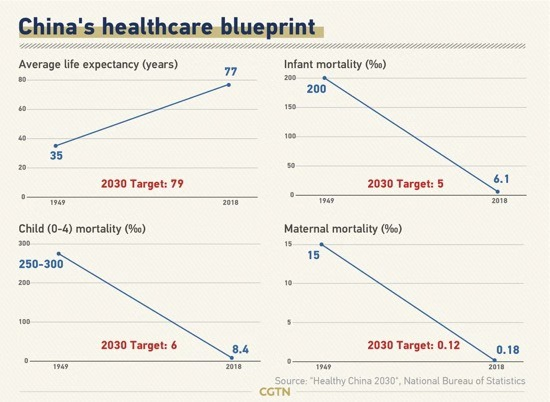 The 2018 Sustainable Economic Development Assessment released by the Boston Consulting Group shows that China "jumped 25 spots" over the past turbulent decade complicated by the worst global recession since the Great Depression. The Assessment, a diagnostic tool on the relative well-being of a country's citizens, notes that China's progress "stemmed in large part from improvements in education and infrastructure."

Back in 1949, some 80 percent of the Chinese population were illiterate, with the enrollment rate in primary education standing below 20 percent. That figure was raised to 95.5 percent in 1978. The momentum continued and by 2018, the graduation rate of nine-year compulsory education reached 94.2 percent. The country has also witnessed a steady rise in the higher education enrollment ratio: from 0.22 percent after the founding of the People's Republic of China to 2.22 percent around 1978 and reaching 48.1 percent last year. Government spending on education remains above four percent of GDP for seven consecutive years in a row. 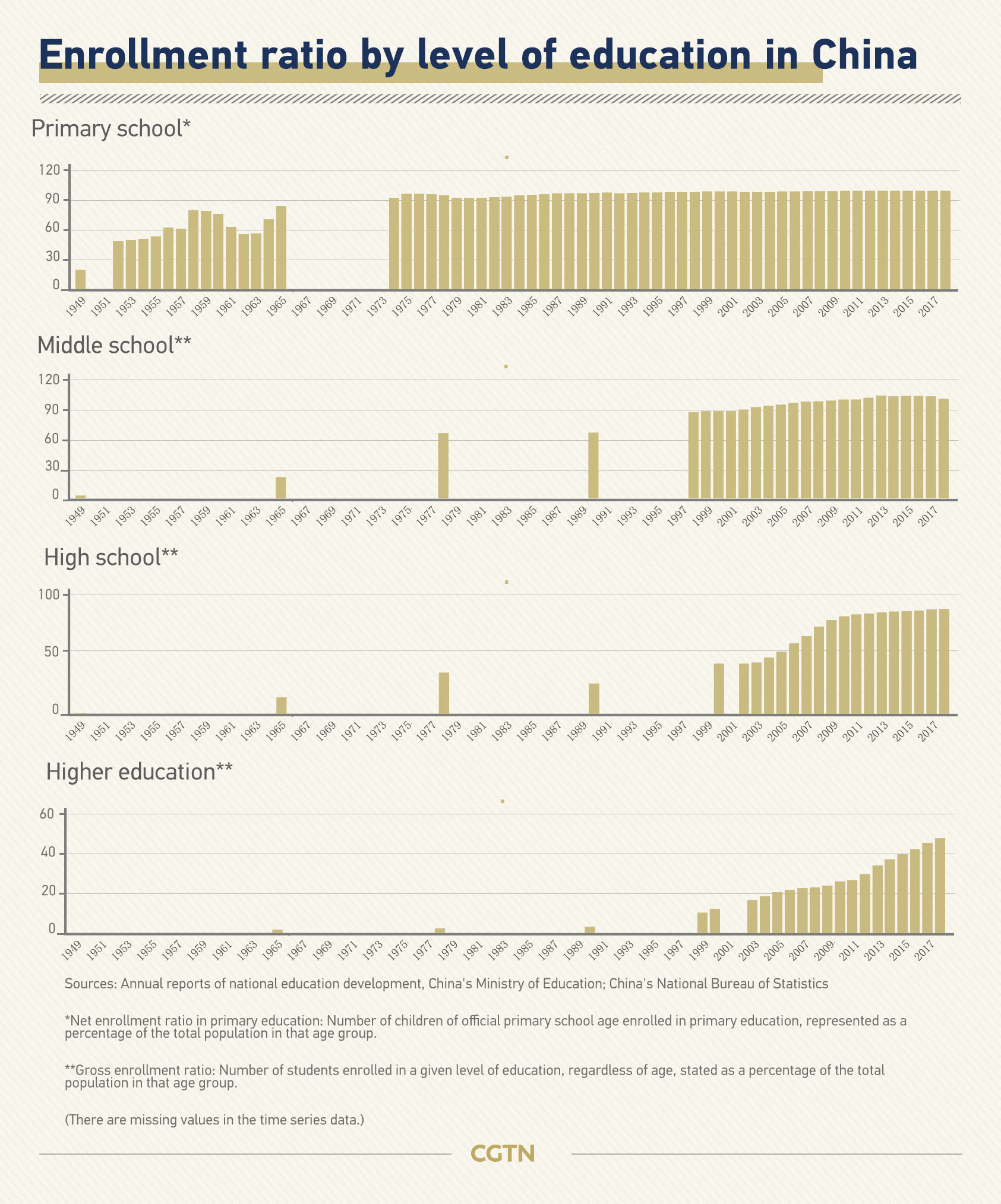 A provider of global public goods

After four decades of reform and opening up, China not only has reaped the benefits of globalization by inviting others in, it is also actively reaching out for the common good.

The Belt and Road Initiative (BRI) launched in 2013 aims to reinvigorate the ancient Silk Road trade routes by building a modern trade and infrastructure network connecting all regions and continents. The project has been overwhelmingly well-received by people from participating countries.

According to the World Bank, the BRI will help lift 7.6 million people out of extreme poverty and 32 million out of moderate poverty worldwide, while increasing the trade volume of participating countries by 2.8 to 9.7 percent. Meanwhile, global trade volume will grow 1.7 percentage points to 6.2 percent and income increase 0.7 point to 2.9 percent due to the BRI.

On the world stage, China successfully hosted major regional and global summits of Asia-Pacific Economic Cooperation, Group of 20, the BRICS and Shanghai Cooperation Organization (SCO). It also spearheaded the establishments of the SCO and the Asian Infrastructure Investment Bank.

Role in the United Nations

As a permanent member of the United Nations Security Council, China has worked closely with the international community on hot-button regional and global affairs, consistently pushing for political solutions on the Korean Peninsula and in the Middle East.

China is a steadfast supporter of the UN's efforts to promote peace and development for all, having joined and implemented international agreements tackling problems from climate change to terrorism. As for the UN's peacekeeping mission, China is the second largest financial contributor and sends the most troops among the five UNSC permanent members.

As China works steadily toward its own UN 2030 sustainable development goals, the country draws on its experience as a developing country to assist other developing countries in their poverty alleviation work with no political strings attached.

China's development sets an example for other developing countries, and proves that modernization does not mean copying the Western model without considering a country's own conditions.