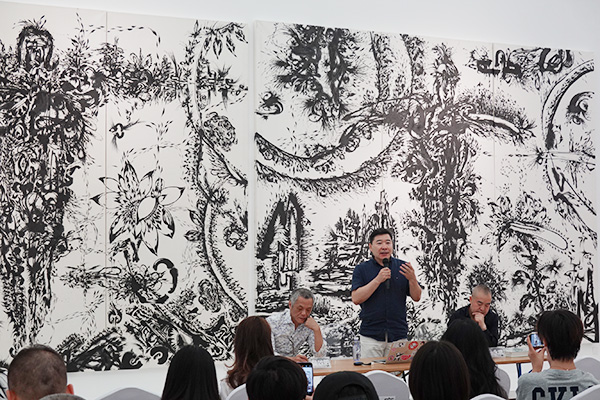 Wang Yanling, founder of 798 Art District, at the launch of his book The Geometry of Imagery. (Photo: China Daily)

More than 8 million people from home and abroad have visited 798 Art District, one of Beijing's landmark cultural venues, in 2018 alone. But few of them would recognize Wang Yanling, a critical figure in the capital's art scene who when time is available often tours the compound and talks to gallery owners and artists he has known for years.

Wang serves as the chairman of the Beijing Sevenstar Huadian Science and Technology Group Co., Ltd. And he initiated the establishment of 798 in 2002, transforming the compound, which the company runs, and its Bauhaus architecture into a hub of contemporary art.

Over the years he has formed close relationships with artists, galleries and curators.

Wang recently published The Geometry of Imagery, a book in which he, a graduate of physics, shares his understanding of the evolution of art in the 20th century.

He also talks about the view of space in Chinese philosophy and how it influences the work of Huang Zhiyang, the Taipei-born artist who now lives in Beijing. Wang curated Huang's solo exhibition at the Whitebox Art Center in 798, which ended on Aug 4.