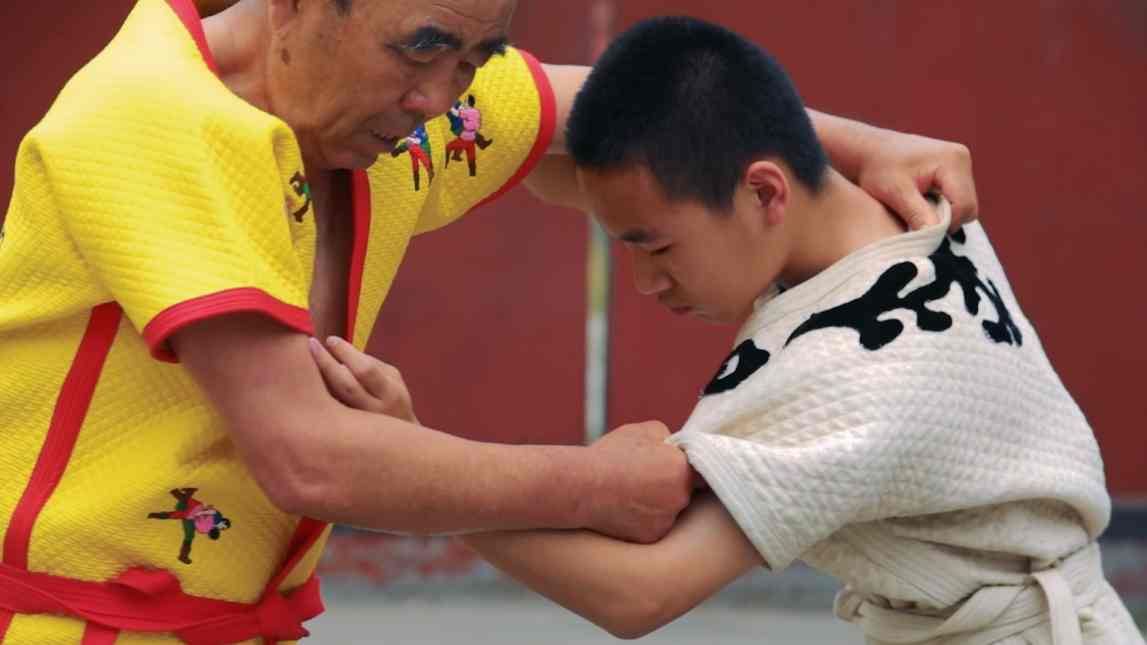 In the Temple of Heaven Park, 85-year-old Li Baoru begins his exercise at 8 o'clock every day, in all weathers.

He stands firmly in his wrestling outfit. His strong muscles make you wonder whether he has aged at all.

When people ask him about his techniques, he always greets and teaches them for free.

He's more than happy being called a "wrestling fanatic."

He talks with a strong Beijing accent. His wrestling career started at the age of 14. "At that time, the children all loved martial arts. It's like a tradition. We used to learn tricks from each other.”

"It was as simple as the will to win. Wrestling caught my interest because at the end of the day, you are either up or down," Li says.

There wasn't much entertainment either. When the night fell, the children would practice wrestling in the street, even without any road lamps.

By the age of 18, Li had mastered wrestling. In the 1950s, he earned himself a spot on the Beijing wrestling team. In the first and second National Games, he was an athlete and the coach.

"Chinese wrestling has its own culture. It evolved from Beijing wrestling."

Li knows the history of the sport very well, "In the Qing Dynasty it was a training exercise for the imperial guards. The terms, the moves, everything came from the local culture, such as the term for the kneeling technique that derived from Manchu language.”

Wrestling seems like a violent version of martial arts, although Li believes that it is "one of the most civilized games that echo the Olympic spirit," because "when you put your opponent on the ground, you win. It's simple and fair."

However, as Chinese wrestling was removed from the National Games, many professional teams were disbanded, and the number of wrestling players dropped significantly. In the new century, it became even less popular as an entertainment activity. But Li never gave up.

"Some practitioners may keep doing it but only for a couple of years. I love it full-heartedly. So I keep practicing even though my wrestling association doesn't exist any more. I've been doing this sport all my life."

A robust old man, Li still teaches people wrestling techniques. He's a regular to the Temple of Heaven Park. "I'll teach anyone who wants to learn. Be it black-haired, grey-haired, brown eyed or blue eyed, anyone is welcome."

He also went abroad to wrestle with foreign coaches: "You don't have to speak their languages. Your moves speak for you.”

Li believes that living in the new era, he should be equal with his pupils: "I never do the old rituals like kowtowing to the master, or like sworn brothers stuff." He is most pleased to see the pupils improve.

"When I know something that you don't, I shall teach you. Or I might die leaving no legacy at all. It's such a waste.”

To further promote Chinese wrestling, the elderly wrestler even learned to use new technologies. He makes video tutorials and writes columns on online social media platforms, persistently introducing the history and techniques of the sport. With the help of the Internet, wrestling lovers are now able to reach him for communication.

"People keep asking why I just can't quit wrestling and just rest at this age. Me resting? I'm always feisty!" Li jumps on his bicycle and goes to his "wrestling park" again.