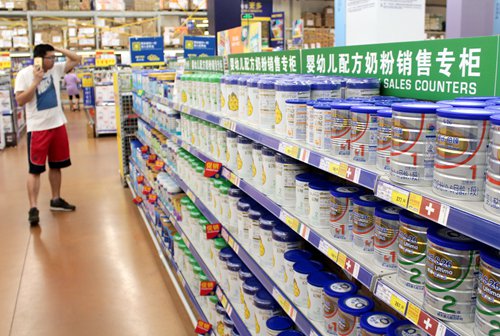 A new round of comparison between domestic and foreign-made milk powder has hit the Chinese public after Chinese authorities cancelled the registration qualifications of nine overseas milk powder companies, three of which were once confirmed to have food security hazards.The nine enterprises failed to submit registrations before their qualifications had expired, so they cannot register any longer and their products manufactured after Tuesday are forbidden to be imported into China, China's General Administration of Customs published in an announcement on Saturday.The administration examined 64 companies, 55 of which met all the registration conditions and have acquired qualifications.Among the nine enterprises, three were found to have food safety problems previously, including France's Celia Laiterie de Craon, HOCHDORF Swiss Nutrition Ltd in Switzerland and Agrana Starke GmbH based in Austria, The Beijing News reported.The Lactalis Group in France, the third largest dairy food enterprise in the world preventively recalled 43 batches of milk powder in China in December 2017 for suspicion of salmonella contamination, and the company's registration qualification in China was suspended after the incident, news site thepaper.cn reported.The incident has brought back a debate about domestic-manufactured and overseas-manufactured milk powder, with many netizens starting to compare advantages and disadvantages of domestic and international brands again.Some showed their support for domestic-manufactured milk powder. "My daughter used to drink milk from Wyeth, a New Zealand company, but I found many kinds of milk powder contain additives, so I changed to Feihe, a Chinese brand," "JackZhang124" wrote. "Now my daughter is in good health, which is the reason I think the ingredients of domestic milk powder are more suitable to Chinese."However, others are still suspicious of domestic milk products after the 2008 milk scandal in China, which involved milk and infant formula along with other food materials and components being adulterated with melamine, leading to [health complications in] more than 39,000 baby victims, People's Daily reported. A mother of a one-year-old baby told the Global Times on Thursday that she still prefers overseas-manufactured milk powder for "security and price", "overseas milk powder is cheaper and safer," she said. "China's brands usually cost 400 ($58) to 500 yuan, while the price of overseas products is less than 200 yuan (per jar)."