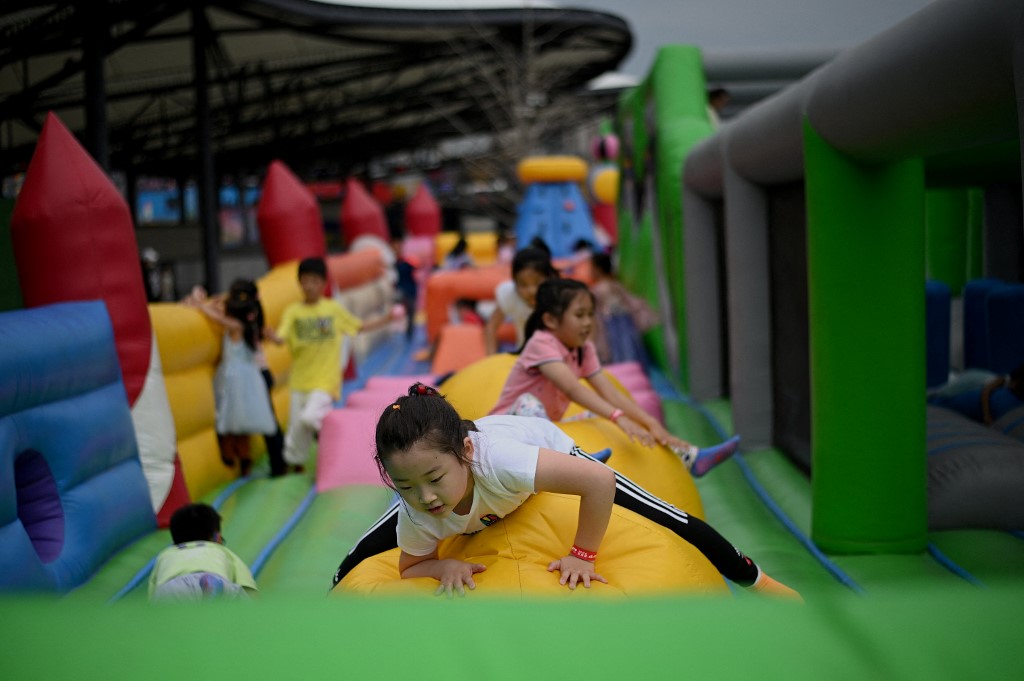 Children play on a "bouncy castle" set up at a shopping centre on International Children's Day in Beijing on June 1, 2021. (Photo: AFP)

As of Sunday, 23 provinces and autonomous regions in China had released demographic data on birth rate for 2021. The data showed that nine provinces experienced a natural negative increase in population in 2021 and only two provinces had a birth rate above 1 percent. Experts said that the new third-child policy is unlikely to reverse the trend in the short term.

According to China Business Network, in terms of total births, four provinces had more than 500,000 births in 2021, among which South China's Guangdong, which has the largest economy in China, was the only province with more than 1 million births - 1,183,100.

In terms of birth rates, only two out of 23 provinces — Guizhou and Qinghai — had a birth rate of more than 1 percent.

"This is an inevitable result of a long period of low fertility rate," Huang Wenzheng, a demography expert and senior researcher at the Center for China and Globalization, told the Global Times on Wednesday. "It can be predicted that China's birth rate will continue to shrink for more than a century and the birth rate in first-tier cities will continue to fall. The third-child policy may alleviate some of the problems, but it is unlikely to reverse the trend in the short term."

In general, the areas with high birth rates are mainly concentrated in the western and central parts of China where urbanization rates are relatively low. However, South China's Guangdong and East China's Fujian, two economically developed coastal provinces with high urbanization rates, also have high birth rates. Huang pointed that this is because people in some cities in southern China are likely to have more offspring, which may be influenced by the ancestral culture. Comparatively speaking, their traditional culture hasn't changed much, so the birth rate is relatively healthy, Huang noted.

Besides, Guangdong has a large inflow of populations, mainly young and middle-aged people, with a large number of people of child-bearing age, Huang added.

"Because fertility rates have been low, which means that there are fewer potential mothers and fathers, and the number of people willing to have children is shrinking fast at the same time. Add these two factors together and we now see the trend of a rapid shrinking in natural population growth rate," Huang said.