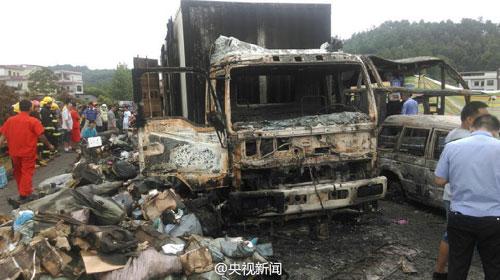 Nine civil servants were sentenced to prison for dereliction of duty in a deadly highway explosion in central China's Hunan Province, according to local courts.A van loaded with alcohol rear-ended a passenger coach on July 19, 2014 on a section of the the Shanghai-Kunming Expressway in Hunan. A huge explosion followed with flames engulfing five vehicles, leaving 54 dead and six injured.Six officials, working for the local work safety, quality and technology supervision administrations, were sentenced to prison terms ranging from three to three-and-a-half years for dereliction of duty.Three traffic police were sentenced to prison terms between three years and 40 months for malpractice.Changsha City Intermediate People's Court is conducting a second trial for a further four people in an automobile inspection company, who were also involved in the accident. The accused allegedly made documents that were seriously inconsistent with the facts.A previous investigation showed that the van involved had been illegally remodeled and was carrying around 6.5 tons of alcohol at the time of the accident.