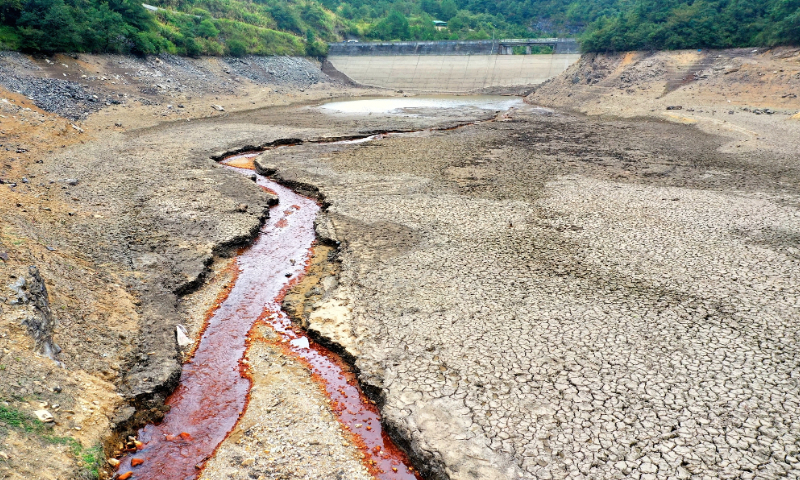 The photo taken on August 21, 2022 shows the Daxin Reservoir in Shizishan village, Suxian district in Chenzhou city, Hunan Province has dried up to the bottom.(Photo: VCG)

As the drought in the Yangtze River basin continues, Central China's Hunan Province has become one of the most-affected areas. According to official statistics, as of Sunday, all 122 cities and counties in the province have reached the medium drought level or higher, and 90 counties and urban areas have been hit by extreme drought.

According to the weather forecast, precipitation in Hunan will remain low in the coming week, and the drought will continue to develop before October 2.

Meteorologists said that most areas in the province will be rain-free in the near future, and mitigation work will be needed such as water conservation and scientific water use. In addition, some areas in central and southern Hunan have a high risk of forest fire, so strengthening outdoor fire control and fire monitoring is very important.

Outside Hunan, the drought in many parts of the middle and lower reaches of the Yangtze River has lasted for over 70 days. Since July, the cumulative rainfall in China's Yangtze River basin is nearly 50 percent below average and the lowest in the history of the same period since 1961. Historically speaking, June to August is the main flood season in China, when the Yangtze River basin should enter the rainy season.

Affected by high temperatures and little rain, several rivers and lakes in the Yangtze River basin are seriously dried up. On September 6, Poyang Lake's water level fell below 8 mm and the water level of Dongting Lake, another major lake, is also at the lowest in history for the same period.

The direct cause of the persistent low precipitation in the Yangtze River basin is the persistent anomalous atmospheric circulation in East Asia, especially the significantly strong westward extension of the subtropical high pressure in the western Pacific Ocean. In addition, the southern pressure over the Qinghai-Xizang Plateau is unusually strong and easterly, resulting in high ground temperatures. A lack of clouds also makes it easier for solar radiation to reach the ground, so high temperatures are frequent and strong, Chen Lijuan, chief forecaster of the National Climate Center, told China News Service in an earlier interview.

According to the meteorological department's forecast, rainfall in the Yangtze River basin will continue to be low in mid-to-late September and October, with rivers continuing to receive less water. Also, water levels in rivers and lakes will be low, and summer and autumn droughts may occur in Jiangxi, Hunan, Hubei and Anhui.

However, Yao Wenguang, director of the Water and Drought Disaster Prevention Department of the Ministry of Water Resources, said Saturday that the current water supply is generally controllable and the department will continue to optimize the joint scheduling of reservoir groups in the Yangtze River Basin to ensure the safety of urban and rural water supply.