CHINA 90 percent of Chinese respondents say they have no worries about going out in nights: poll

90 percent of Chinese respondents say they have no worries about going out in nights: poll 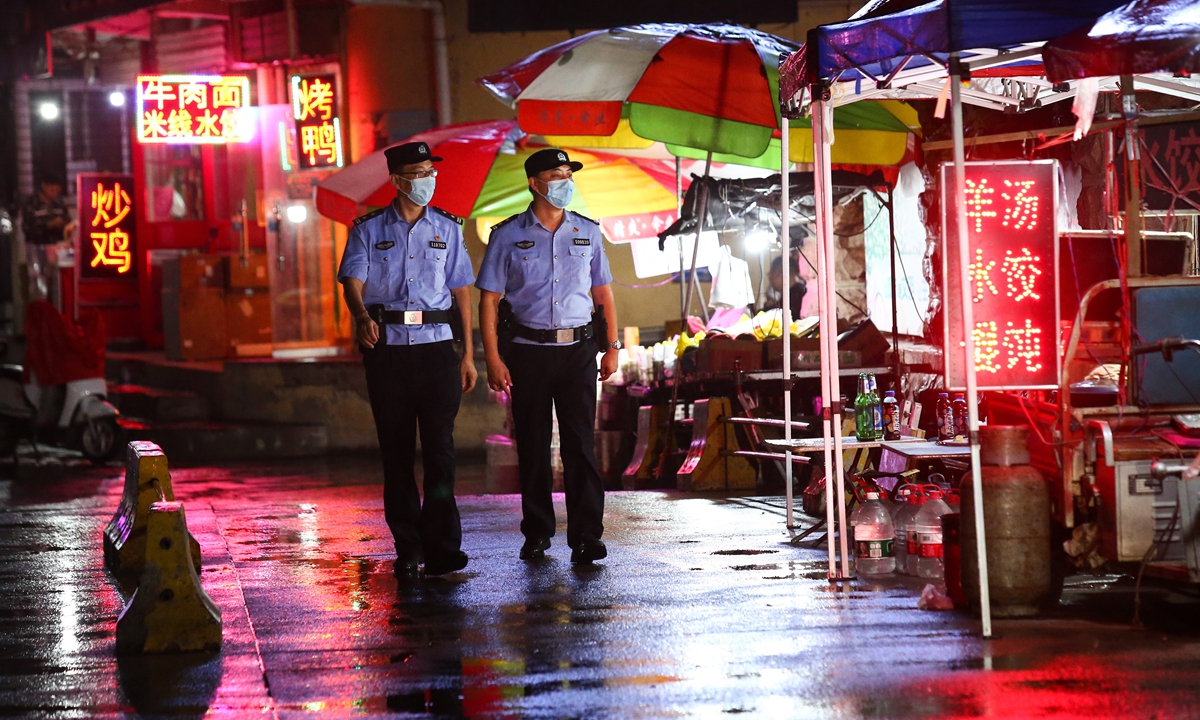 Police in Jinan, East China's Shandong Province, patrol a night market on July 5, 2022, as part of the Public Security Ministry's 100-day campaign to crack down on gang crimes. Photo: CFP

A poll showed 90 percent of people have no worries about going out during night, China's Ministry of Public Security (MPS) said on Wednesday, highlighting positive results was achieved by the 100-day campaign which was launched in the wake of the brutal attack at a restaurant in the city of Tangshan in North China's Hebei Province.

In past years, the public sense of security among Chinese citizens have remain strong, rising from 87.55 percent in 2012 to the 98.62 percent in 2021. A poll by a third-party agency taken before the 100-day campaign finishes showed 90 percent of people have no worries about going out in night, Qiu Baoli, the director who is responsible for the 100-day campaign in the MPS, told Wednesday's press conference.

With efforts of public security organs across all levels, a total of 640,000 criminal cases, 1.43 million criminal suspects and 7,442 venues containing security risks were busted during the campaign, according to Qiu.

About 97.72 percent of being surveyed are satisfied with the campaign led by the MPS, as the poll conducted by the National Bureau of Statistics showed. It yields good results, not only demonstrating police authority, deterrence on criminals and safeguard the public, Qiu told the press conference.

The campaign was launched since June 25 after the curtain call of special campaign against crimes in the wake of the brutality at a restaurant in the city of Tangshan in Hebei.

In details, during the campaign, special efforts were given on cracking down the illegal violation in summer nights. During the three separate movements, conducted on July 22-24, August 12-14 and September 9-11 at night between 8pm and 2am, by multiple police forces, 162,000 criminal suspects, 674,000 cases of drunk driving were busted. More than 9.7 million police forces and 11.8 million civil forces have been mobilized during the period.

Though the 100-day campaign targeting on eliminating security problems threat the public has drown to close, the MPS will maintain a tough stance on busting illegal behaviors, Zhang Ming, a spokesperson of the MPS, told the press conference.

Patrols on political centers, bustling commercial districts, schools, parks, and densely-populated areas and crackdowns on illegal behaviors targeting vulnerable groups such as women and children will be intensified, to ensure a stable society, Zhang said.

The case of harassment and brutal beating of four women at a restaurant in Tangshan occurred in the midnight incited heated discussion about public security situation in the country as the case in Tangshan is at odds with the general safety trends.

Latest court ruling announced by the Guangyang district people's court in Langfang in Hebei showed Chen Jizhi, the prime culprit involved, has been sentenced to 24 years in prison and fined 320,000 yuan ($45,215).

The remaining 27 defendants were sentenced to between six months and 11 years in prison in accordance with the law. Among the 27 defendants, 19 were fined between 3,000 yuan and 135,000 yuan, according to the court ruling.