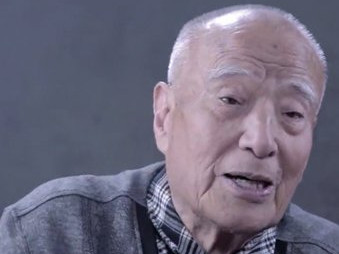 Su Pengxue appears as a guest on the talk show Talk to her (Photo: Global Times)

Su Pengxue turned 90 last year, but everybody who sees him says he looks like someone in his 70s. What he didn't tell people was that while others his age might be in wheelchairs, he has managed to break a world record in a track event. Su had always been an active sportsman in his younger years. Having no intention of giving up this lifestyle in his older years, he decided to participate in the World Master Games, an international multi-sport competition, in Australia. He had his mind set on achieving one goal, breaking a world record. But first, he needed to put together a team of runners his age, and that proved to be no easy task.Glorious past Su has always won gold medals and broken records. In his house in Beijing, there's a cupboard filled with medals and awards from all sorts of sports events. The earliest was a first place prize in a high-jump competition in Beijing in 1948. When he was young, Su worked at the Beijing Communications Administration and was one of the fastest telegraphers in the building. When he was in his 20s, the Chinese government launched a campaign to increase sports participation that got everybody exercising. Back then, he was a member of the Beijing Changzheng Marathon team and Triathlon Association and represented China in competitions abroad, winning numerous medals. But in 2003, he was confined to his home as he had to take care of his sick wife. He sometimes watched people his age on TV breaking world records, while he was barely able to find the time to go downstairs or go out for a run. In 2012, five months before his 85th birthday, Su decided he couldn't sit idly at home anymore. He wanted to participate in the World Master Games for the 85-year-old division and break the world record for the 1,500 meters, something that hadn't been done in over 20 years. Testing timesWhen Su mentioned this idea to his former teammates, they tested his performance and found that he could complete the run in 7 minutes and 11 seconds, which was only 8 seconds behind the world record.Tragically, Su's wife passed away the next year. Later, his health began to deteriorate and he could no longer run at that speed. But despite these setbacks, Su was still passionate about breaking a record. In 2016, he came up with another idea. As he was unable to do it alone, why not make it a team effort? The world record for the 4x400 meter relay in the 85-year-old group hadn't been broken in over seven years. However, finding a team seemed an even harder task than breaking a world record. Su and his former teammates ran through the lists of their former marathon and triathlon associations, circling those in the right age category, then tracked them down one by one. However, many couldn't make it due to health or family issues. Eventually, Su found three willing participants: Sun Guiben, Wang Zhiyong and Wang Jinbiao, who were born in 1928, 1924 and 1931 respectively. The team had a combined age of 353 years.They started training right away. The world record of 8 minutes and 43.75 seconds had been set in Finland in 2009. Su figured that if everybody could run in under two minutes, they would definitely achieve their goal.They agreed that they could participate in other competitions first but had to make sure nobody was injured or absent during the relay. Record breakerOn October 25, 2016, they boarded a plane from Hong Kong to Perth, Australia. Before the relay, they were beset by accidents, with Sun and Wang both pulling their muscles while running in other contests. Su was agitated. He had finally put together a team and got them to Australia, but was far from certain that they could even participate in the contest. Fortunately, both of them managed to recover quickly. On November 6, 2016, at 3 pm, the four appeared on the starting line. At the sound of the gun, Wang shot out. He was followed by Sun, then Wang, and finally Su. He dashed for the finishing line and crossed it in a time of 8 minutes 35.23 seconds. From the finishing line, Su's friend shouted to him that he and his teammates had successfully broken the world record.Su said that he wants to set a world record for the high jump when he turns 100. Wang said he wants to run with his wife until he is 95. Sun has a term for those who live only to eat and sleep: the walking dead. "If you don't have a goal, you're old. As long as I'm running, I'm still young."