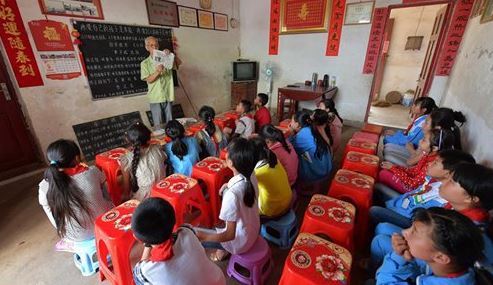 Some 91.3 percent of Chinese children left back home by their parents suffer from psychological violence and 13.7 percent suffer

simultaneously from a combination of neglect and physical, mental and sexual abuse, according to an annual survey published by a Beijing NGO.

The shocking findings are based on analysis of "2,763 pieces of verified data" collected in 2019 from East China's Jiangxi and Anhui provinces and Southwest China's Yunnan Province by On the Road to School, a Beijing nonprofit organization and public welfare promotion center, which released a paper on these children's mental health for a consecutive fifth year.

Some 91.3 percent of the surveyed children, whose parents had to work in other places, suffered mental abuse, 65.1 percent physical abuse, 30.6 percent sexual abuse and 40.6 percent were neglected. Some 13.7 percent suffered all four simultaneously.

Children left behind in urban areas suffered worse violence than their rural peers, indicating cities should be the focus of prevention and control.

"Statistics show that one-third of the migrant children are also left-behind children who live in cities. They may attend boarding schools where the campus bullying problems are more severe," Chen said.

Home and school are the two locations where children tend to suffer physical and emotional abuse, the paper said.

Researchers found physical abuse mainly occurs at school, which includes bullying and punishment from teachers as well as bullying between students.

These issues of violence on children represented a "major disaster area," the paper warned.

Emotional abuse occurred mainly in families, such as verbal abuse and discrimination, with the incidence at 86 percent, the paper said.

All research suggests that being subjected to violence impairs a child's psychological development.

A child's self-esteem, resilience, emotional strength and social ability all decrease after violence, with a decrease of up to 10.6 percent, the paper noted.

A worrying 30.6 percent of the left-behind children suffered sexual abuse, indicating they were more likely to suffer sexual assaults.

In 2015, a 15-year-old girl from Bijie in Southwest China's Guizhou Province was sexually assaulted then murdered together with her 12-year-old brother.

In 2013, a 13-year-old girl from South China's Guangxi Zhuang Autonomous Region was repeatedly raped and sexually assaulted by 10 villagers who were later imprisoned.

The physical and emotional violence that children suffer stems partly from traditional Chinese concepts of raising them, Chen noted.

"Schools and parents, especially parents from older generations, tend to resort to out-of-date parenting methods including corporal punishment and verbal abuse when they educate children, which leads to the situation that children left behind in villages suffer more often from such abuses," Chen told the Global Times.

The upbringing of left-behind children was a "most urgent issue that the government needs to deal with, Chen said.

"Although children raised by parents can also face the risks of corporal punishment and verbal abuse at home and school, the left-behind children must suffer these problems more seriously because of a lack of parental care and their weaker ability of psychological self-protection," Chen said.

The paper did not cover the issue that some of these children were also targeted and subject to drug problems, Chen noted.

The method of fundamentally solving these problems is to lower or remove the threshold on migrant children receiving education in the cities, Chen said.

"Our research shows that when the threshold of migrant children receiving education in the cities is lifted, the parents do not leave the cities and return to their hometowns," Chen said.

Parents would rather stay in the cities and send their children home, Chen said, and thus the problem of left-behind children was not solved.

The government should lower or remove the threshold in the compulsory education, Chen asserted.

In the meantime, Chen suggested setting up more youth activity centers where the children can be organized by governments and non-profit organizations to take part in more meaningful activities rather than leave them unattended.