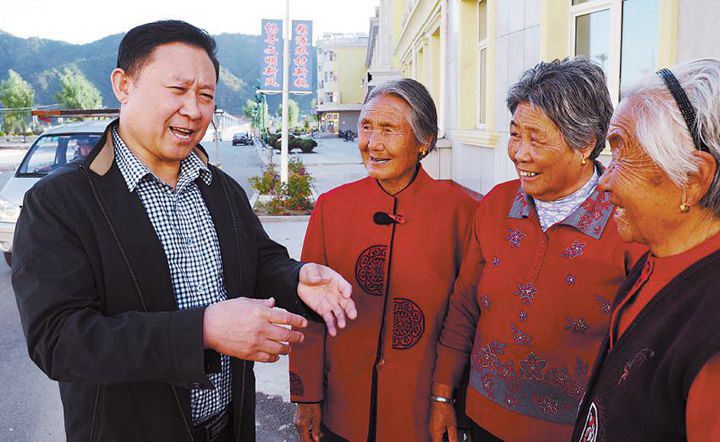 SHIJIAZHUANG, June 29 (Xinhua) -- If possible, Fan Zhenxi, 57, hopes to work as the Party secretary of Zhoutaizi Village for his whole life.

After retiring from the army in 1987, Fan was elected as Party chief of the village in Luanping County in north China's Hebei Province.

Tucked away in the mountains, the village was quite impoverished then. Besides a shabby house with a three-legged table, an old phone and a broken chair, all the property the village owned was a debt of 80,000 yuan (about 11,640 U.S. dollars ).

"Everyone trusts me, so I won't let them down," Fan said.

To find a way to help villagers get rid of poverty, he thought hard and finally decided to start with recovering the several mines in the village, which were privately operated without any benefits to the villagers.

However, the mine owners were unwilling to obey. He had no way out but to turn to his brother who owned the largest mine.

"It was a tough choice," Fan said, recalling his hesitations and the fights with his brother. "Whether he agreed or not, I had to do it."

The mines were finally taken back and new mining right contracts were signed, with royalties paid to the village. But his brother ended their relationship.

"I don't regret my decision because the interests of the village are more important," said Fan, who joined the Communist Party of China at 23.

The village made nearly 100,000 yuan from royalties the first year after the new mining contracts were signed, forever changing its destiny.

After paying off all the debts, the village, led by Fan, began to develop agricultural production. The village became the first one to cast off poverty in the county in the late 1980s.

However, a bad fortune befell upon Fan in 1991 when he accidentally touched a toxic chemical during a field trip for a project in northeast China. He was later diagnosed with leukemia.

The only way to treat the disease was to receive a bone-marrow transplant operation. But knowing that the deposit for the hospital in Beijing would cost 100,000 yuan, Fan decided to give up.

"He got sick because of us and we must save him." All the fellow villagers donated more than 100,000 yuan within a week.

Even his brother went to Beijing and donated bone marrow. "I help him not only because he's my brother but because he's also a good Party secretary," he said.

Fighting with death for four months, Fan survived. When discharged from the hospital, his doctor told him not to work for two years but he devoted himself to work immediately after returning to the village. "I owe my life to fellow villagers and I must work harder to repay them."

He fulfilled his promise and devoted all his time and energy to the development of the village to provide them with better lives.

"He's really an ironman. You can't imagine a man who has suffered so much and still works so hard," said the villagers.

Under Fan's leadership, the village became the richest in the county in 2001 and the average income of the villagers has grown to 18,000 yuan from no more than 400 yuan in 1987.

Apart from the village's economic development, Fan also cares about the livelihood of elderly people.

There is a six-story building in the center of the village, which is home to more than 130 villagers who are above 70 years old. Everything there is free, including furniture, household appliances, bedding and even pajamas.

Liu Dianying, 83, moved in when the apartment for seniors was completed nine years ago. Every day after dinner, he would chat with the fellow elders and take a walk.

"Thanks to Fan and the village committee, they treat us like their own parents," he said.

The 67-year-old Gong Changyou is also quite content with his life. "It has changed so much compared with 15 years ago," he said, pointing at the rows of buildings in the village.

"Without Fan, there wouldn't have been so many buildings and such a clean environment." He recalled that he used to live in a tile-roofed house, in front of which the dirt road was full of pig manure.

As a rule, the elderly above 60 years old in the village can get a pension of 300 yuan each month and those above 70 can enjoy 500 yuan.

"It's not too much, but it's a comfort for them," said Fan. "It's my responsibility to have the elderly properly looked after."

As some elderly people worried if he would quit one day, Fan said he will work for the village until the end of his life.