CHINA A gift from Macron to Xi, a friend from afar

A gift from Macron to Xi, a friend from afar 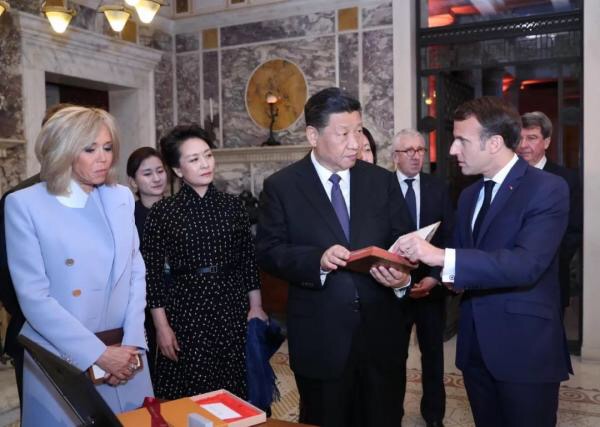 PARIS, March 26 (Xinhua) -- "It is a pleasure to have friends coming from afar," the ancient Chinese philosopher Confucius said in The Analects of Confucius, a collection of his ideas and sayings.

This Chinese classic has now been given to a friend from afar as a national gift of France. That friend is Chinese President Xi Jinping, who is on a state visit to the European country.

The original French version of "An Introduction to The Analects of Confucius," published in 1688, was presented to Xi as a national gift by his French counterpart, Emmanuel Macron, when the two leaders met on Sunday in Nice, France.

Xi said he would take this precious gift back to China's National Library.

The early translations of The Analects of Confucius had inspired French thinkers Montesquieu and Voltaire, said Macron. The only other remaining book from this version is now kept at his country's Guimet National Museum of Asian Arts.

The soaring popularity of this Confucius classic in France is a good example of the long-standing cultural communication between the two countries.

Former French President Valery Giscard d'Estaing once told Xinhua that he had read many Chinese classics, among which The Analects of Confucius would often be by his bedside.

Apart from economic and trade cooperation, cultural exchanges are also an important part of the France-China ties, he said.

Florine Marechal, a bookstore staffer, said the French versions of books like The Analects of Confucius are popular among many French readers, including herself.

Marechal said she has been learning Chinese for seven years out of her passion for Chinese culture and literature, and gave herself a Chinese name, Fu Yating, which means elegance and grace.

She likes reading Chinese books like The Analects of Confucius, as well as the works of other modern Chinese writers like Lu Xun and Ba Jin.

Back in 2014, which marked the 50th anniversary of the China-France diplomatic ties, Xi wrote in a preface for a Chinese cultural relics exhibition in France that the enhancement of cultural exchanges of the two nations, both representing Eastern and Western civilizations, would consolidate public support for developing bilateral relations, improve the two cultures and forge diversified global civilizations.

In that same year, The Analects of Confucius was voted as one of the 10 most influential Chinese books in France.

According to Joel Bellassen, who involved in the voting as the general inspector of Chinese language at the French Ministry of National Education, the popularity of learning Chinese in France is closely related to historical bonds of the two countries.

The country is one of the earliest to bring Chinese language teaching into the national educational system under a teaching syllabus designed by its education authorities.