CHINA A glimpse of rural revitalization in east China

A glimpse of rural revitalization in east China 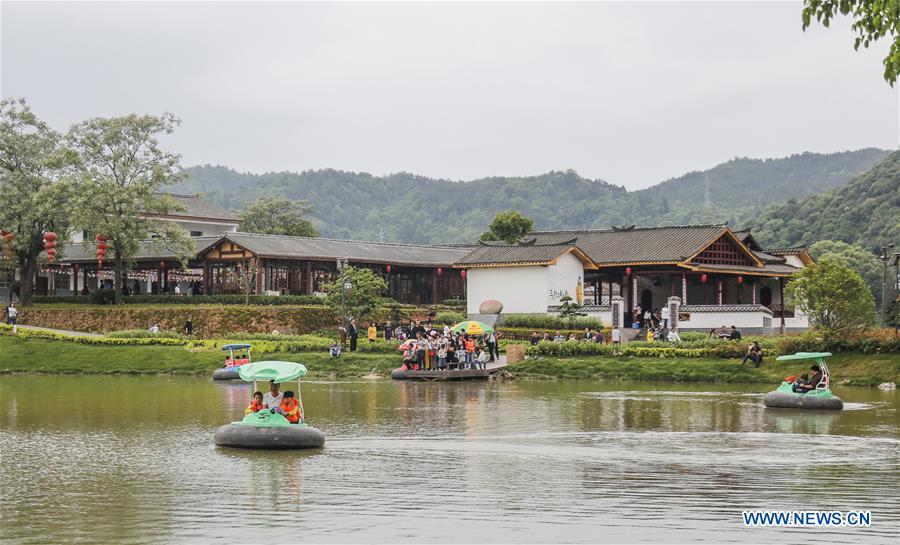 NANCHANG, May 25 (Xinhua) -- For decades, fruits and vegetables in the village of Gunan used to be sold within its vicinity in Yichun City, in east China's Jiangxi Province.

But in recent years, organic products from Gunan have climbed their way out of the village into chain supermarkets in the provincial capital Nanchang, and have become wildly popular.

"We have set up 10 chain supermarkets in Nanchang and in Gaohu Township (which administers Gunan), and we provide more than 30 job positions in the markets," said village official Zhong Yinghua. "About one-third of our employees are from cities and townships."

Since 2012, the village has been focusing on developing organic food, while expanding business to cities and townships by opening chain markets there and by e-commerce, which greatly increased sales.

China's rural revitalization strategy is helping revamp the countryside. The strategy was first put forward during the 19th National Congress of the Communist Party of China (CPC) in 2017 and has been repeatedly stressed by the Chinese leadership since then.

The strategy aims at achieving the basic modernization of agriculture and rural areas by 2035, and the grand goal of a strong agricultural industry, beautiful countryside and well-off farmers by 2050.

Luo Huimin, who used to be a migrant worker, has returned to his hometown in Jiangxi's Wannian County to start a business. With rich land resources, he focused on agricultural products and managed to open chain stores delivering crops and oil for residents in the cities of Nanchang, Shenzhen, Dongguan and Guangzhou, with more than 90 people employed, each receiving up to 15,000 yuan ($2,172) every month.

"Most of the employees are farmers from my hometown," Luo said.

"As the markets between cities and the rural areas become increasingly intertwined, the agricultural resources are becoming more valuable, and agricultural modernization is gaining steam in the countryside," said Yi Yongbo, a local agricultural official in Jiangxi.

Meanwhile, as the rural revitalization strategy gains steam, rural tourism is booming in the countryside. The nice scenery and local delicacies are luring a huge number of stressed-out urbanites.

In Jiangxi's Wentang Township, for example, villagers used to reap in a little more than 1,000 yuan per capita on average annually. In the past three years, as more cities dwellers visited, locals rented their houses as family-inns, which could generate annual revenue of up to 40,000 yuan a year for each family.

"The value of land and houses here has risen greatly, and average annual income per capita has exceeded 10,000 yuan," said a CPC official in Shuikou Village of the township.

In Jiangxi's Zixi County, local businessman Ding Yong'an has bet on "wolf tourism" to power rural economy. In his Wild Wolf Valley, statues of howling wolves stand on the streets and hotels and avenues are decorated with wolf images and named in connection with the animals.

Officials in Zixi were also eager to bolster the local tourism industry, and the local government had created a variety of policies to support rural tourism. Programs such as "Beautiful Countryside" and "The Pure Land of Zixi" were heavily promoted.

Ding's project won government recognition, with Wild Wolf Valley listed as one of its top programs. The local government granted interest-free loans to local tourism companies such as Ding's and promised to support guesthouses, where homeowners open their unused rooms to short-term lodgers, usually tourists.

Amid the tourism boom, authorities in Jiangxi have issued a notice to continue efforts to transform about 20,000 rural villages.

Each village will receive a subsidy of 300,000 yuan this year to boost local development. Government funds will be allocated to build roads, renovate toilets and houses, and beautify villages by planting more trees, according to the provincial Department of Agriculture and Rural Affairs.

As more favorable policies were issued and rural infrastructure improves, rural revitalization is also bringing back migrant workers that used to work in more developed areas for better paychecks.

"More state-owned and private enterprises are coming to the countryside, which has brought good investment and improved industrial chains including production, logistics and sales in rural areas," said Xu Wenqin, an agriculture official in Jiangxi's Fuzhou City. "The situation has made locals more willing to stay than going out."

In addition, 4G network and faster logistics have replaced old infrastructure, allowing many farmers to do e-commerce business.

In the remote Shuangxi Village of Wanzai County, for instance, 220 out of more than 3,200 local residents have engaged in e-commerce business, which helps sell agricultural products worth 20 million yuan to the outside world annually.

According to a survey among 3,378 migrant workers conducted in early 2019, more than 60 percent of respondents said they believe improving public resources such as health, education and infrastructure are making them willing to stay in the countryside or return from the coastal areas.

The percentage of those who chose to stay in the villages is up 10 percent year on year.

In the impoverished Gufang Village, more than 400 migrant workers have returned to start businesses of their own since 2016.

"People in rural areas are truly living good lives, and I believe the future will be better," Zou said.