A luxuriant hamlet compactly nestled among the towering mountains, Yucun village in Zhejiang Province is a striking combination of carved valleys, fireworm-lit ponds, cozy farmhouses and toothsome cuisine. With a population of 1,060, the village is carpeted with azalea blossoms, with fast-flowing rivers and scattered guesthouses adding strokes and splashes to the natural canvas. 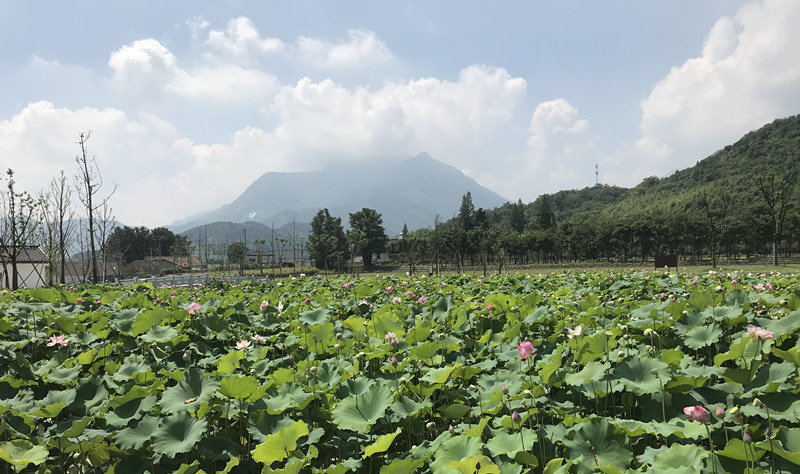 Showcasing ecological tourism, the rural town has attracted over 400,000 visitors from home and abroad, with a GDP of 277.6 million RMB ($40.3 million) in 2017. While visiting this idyllic oasis, tourists would seldom imagine that Yucun village, charming in every aspect, was once a severely polluted and barren land. Abundant in minerals, the village used to be a cluster of cement plants and dusty quarries, which constantly contaminated the already tainted environment.

“Over a decade ago, the gray sky was like a murky dome, suffocating the villagers’ hope for a better life. The quarries, oozing filthy water, mired our desire for greenery. Though the local mining industry provided us a decent income and job opportunities, it also ruined our environment,” said Mou Boting, a 24-year-old villager.

The miserable situation started to improve in 2003, when the local government decided to shut down the quarries, shifting its development focus to ecological tourism. The move was praised by Chinese President Xi Jinping, the then Communist Party chief of Zhejiang Province, who visited Yucun Village and proposed the critical “Two Mountains” theory in 2005, calling clear waters and lush mountains invaluable assets, comparable to the gold and silver of legend. 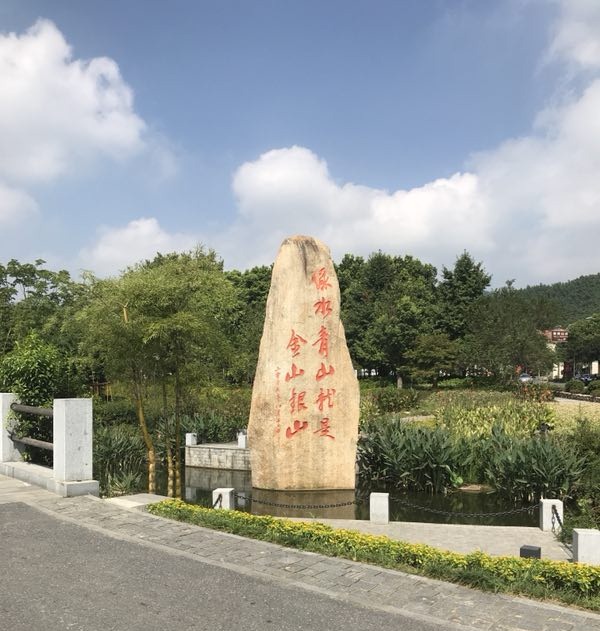 A stela standing at the heart of Yucun Village, on which the “Two Mountains” theory is inscribed: "Lucid waters and lush mountains are invaluable assets." (Photo: People's Daily Online/Kou Jie)

“When the quarries were shut down, the residents were unsatisfied as many of them had lost their jobs, while the village’s annual income dropped from over 3 million to 200,000 RMB. However, the government financially supported the villagers to establish family farms and guest houses, helping them realize that only sustainable development can lead to true wealth,” said Mou.

The “Two Mountains” theory has encouraged other rural areas to improve their living environment, as well as to push towards a green economic transition. By the end of 2017, 27,000 villages in Zhejiang province have been renovated and reconstructed, accounting for 97 percent of the total.

Fifteen years after the local government embarked on its journey to green development, Yucun Village has flourished as a renowned natural resort. Bamboo groves meander through the old mine slopes, while birds chirp from beneath the shade of water lilies. Countless visitors have come here to explore the secret of nature’s revival.

“The secret is to steep economic development in clear waters and lush mountains. The money we have earned from mines is now being invested in environmental protection, and this decision will benefit not only us but also nature and our children,” said Mou.

Located 248 kilometers from Yuncun Village, Tengtou Village in Zhejiang province is another pioneer in environmental protection. Tengtou, which possesses neither resource endowment nor industrial advantage, boasts decorative flowers and plants, as well as environmental protection technologies. In 1993, the United Nations granted the village a Global 500 Award for Environmental Achievement, generating a frenzy of eco-tourism in the region. 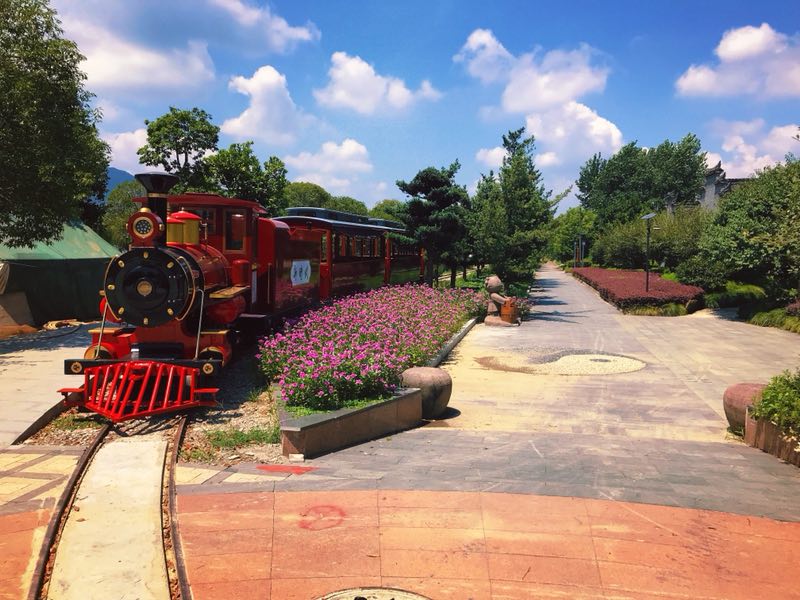 “Beautiful nature is a contributing factor to our economic boom. The better our environment is, the more tourists, companies, and talents are attracted here. Unlike some rural areas that sacrifice nature for short-term interest, we are selling greenery and the concept of natural harmony to earn a better life,” said Fu Demin, director of Tengtou Village Environmental Protection Committee.

The green economy has benefited the village greatly. According to statistics, Tengtou conducted business worth 30 million RMB in 2008 by providing plants and flowers for the Beijing Olympic Games, while in 2010, it provided 100,000 tree seedlings for the Shanghai Expo. The village’s well-protected environment has also attracted visitors worldwide. In 1999, it became the first village in China to sell tickets to visitors, with its annual tourism revenue reaching 131 million RMB in 2017. “We will not allow any business that may contaminate our environment to enter the village. We have also arranged tours for local entrepreneurs to places like Singapore to study new environmental protection technologies, as well as to polluted regions in north China, to learn from their failures,” added Fu.

In Fu’s office, advanced equipment which monitors air quality has caught our eye. According to Fu, the village invested 10 million RMB to build the country’s first village-level PM 2.5 monitoring station that can detect 96 air quality objectives, with its local PM 2.5 index updating every minute.

The mild sunlight penetrates the glass doors of the monitoring station, gliding over the PM 2.5 readings displayed on the equipment screens. 27-32, it is an index that indicates superb air quality, and a number that makes every villager proud.

A sustainable path to wealth

Though both have chosen a sustainable path to wealth, Yucun and Tengtou have found different development plans to suit their situation. For Yucun Village, agritainment has become a pillar of the local economy. According to statistics, the village now has three scenic spots and 14 guesthouses containing a total of 410 beds.

Every day, over 100 tourists stay in Pan Wenge’s guesthouse, tasting the green tea and dried bamboo shoots grown by local farmers. Opened the rural homestay ten years ago, Pan now has an annual income of one million RMB.

“By selling our beautiful scenery and high-quality service, as of 2015, the 280 households living in Yucun Village had 192 private cars, while 58 of them had villas in the countryside and apartments in the nearby cities,” Pan told Zhejiang Daily.

Orchards and fishponds have also been built for urban residents who want to escape the crowds and enjoy the rural tranquility. Hu Jiaxing, the owner of 50 rubber dinghies, started a rafting business, which can attract as many as 10,000 visitors per year, creating an income of over 2.2 million RMB.

Tengtou Village has pushed the eco-tourism industry even further. After 20 years, the village committee has decided to scrap the village entrance fee from 2019, as well as making the decision to rebuild old tourist sites into cultural and food streets.

“Since many villages are now developing ecological tourism, the competition has become fierce. Our ticket income has dropped significantly in recent years thus we need to upgrade our eco-economy innovatively,” said Lin Chenhui, assistant president of Tengtou Group co., Ltd.

According to Lin, the new cultural and food streets will be built using wasted materials and broken seashells. The streets will boost traditional Chinese architecture and delicious local food, and will also harbor several relocated ancestral houses, which will become cultural heritage museums.

In addition to upgrading eco-tourism, more entertainment options and infrastructures have been installed in Tengtou Village to attract new residents and business. The village committee has established an eco-nursing home for the elderly, charging only 1,500 RMB per month, offering the lodgers daily tours around their natural haven. A farm zoo will also be opened in the future, allowing urban children to learn about animals.

Xu Jianyun, a 63-year-old bird trainer, was hired by the local authorities to demonstrate his pigeon-summoning tricks in 2017. Gathering the birds with a single whistle, the animal lover told us that he wants more people, especially those who live in cities, to feel the harmony between animals and humans so that people can better respect nature. 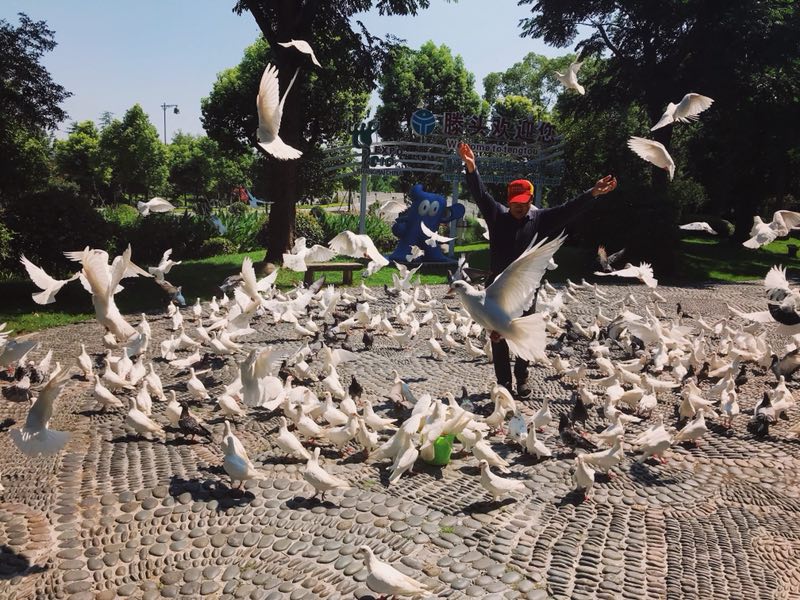 63-year-old bird trainer Xu Jianyun can summon hundreds of pigeons at will.

“As the urban economy slows, many urban residents may want to come back to the countryside. We want to create a better environment and more job opportunities for those people, as doing so can also boost our economy and reverse the brain drain in our villages,” Lin added.

According to China’s Ministry of Agriculture and Rural Affairs, 5.7 million people have moved from cities to the countryside to start a business in the last few years, while Tengtou Village, which has only 800 villagers, now is home to an external population of over 4,000.

“We welcome people to work and live in our villages. When they decide to return to their hometowns, they can bring the concept of environmental protection back home, helping us spread the greenery even further,” said Fu.