CHINA A happy birthday to China's 'father of hybrid rice'

A happy birthday to China's 'father of hybrid rice' 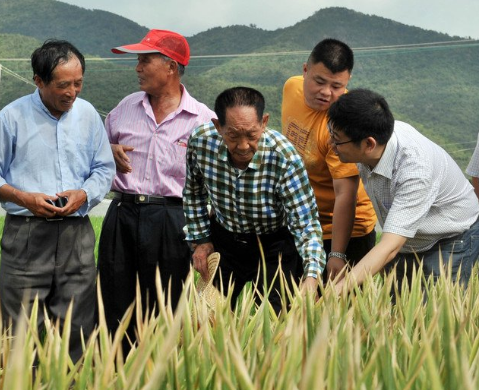 At 8 am. Friday, without the assistance of others, Yuan walked on stage by himself and addressed the forum, which was held in central China's Hunan Province, in front of rice experts from all over the world.

After a 10-minute break, he attended a discussion on development trends of rice in the world, with famous agricultural experts including academicians Luo Xiwen and Xie Hua'an, Japan's Hiroshi Ikehashi, and Ish Kumar from India.

Though still recovering from an illness, his face lit up when he spoke of an achievement he had made a few days earlier -- Yuan set a new world record in super hybrid rice output in Yunnan Province -- 17 tonnes per hectare.

About two-thirds of Chinese depend on rice as a staple food. Yuan, who developed the world's first hybrid rice in 1974, has set multiple world records in hybrid rice yield in previous years.

Following the discussion, Yuan led the experts to a hybrid rice test field about 20 km away. In the field, he shared his experience with them as well as officials from the United Nations World Food Programme.

In addition to China, Yuan's hybrid rice is being introduced to relieve grain problems in other parts of the world. The average yield of the hybrid rice planted in Kenya is four to five times greater than conventional varieties.

In October, 21 students from a dozen countries studying in Hunan Hybrid Rice Research Center received a graduation certificate from Yuan. Over the past few decades, Chinese research institutes and seed enterprises have not only trained tens of thousands of students from developing countries in Asia, Africa, and Latin America, but also sent experts to offer field guidance in those countries.

Raheem, a young man from Nigeria, is one of Yuan's students.

"Nigeria is also developing hybrid rice. But our technology is not mature enough. Mr. Yuan is very famous in Africa. We'd all love to take a picture with him," he said.

At 2 pm, Yuan stepped onto the stage again and delivered a 20-minute keynote speech in English. He said hybrid rice should be further developed to make contributions to food safety in the world.

When asked what his birthday wish was after the speech, he said: 18 tonnes per hectare.