CHINA A heartwarming story between strangers

A heartwarming story between strangers 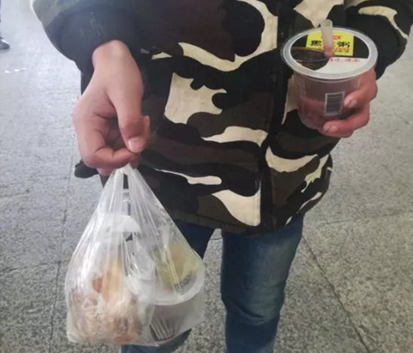 The boy brings a bag with a cup of porridge and a hamburger sandwich to Zhang. (Photo: City Express)

The story between a citizen surnamed Zhang and a 13-year-old boy sparked a lively discussion, which netizens praised as the most heartwarming story this winter.

It started with the boy's request to make a phone call at noon at the Hangzhou Railway Station on Feb.3, City Express reported.

“At first, I hesitated,”said Zhang,“then I asked who he's calling.”

The boy said that he was heading for Zhuji, 84.8 kilometers south of Hangzhou, the capital city of Zhejiang Province, and wanted to confirm his arrival time with his father, so that his father could pick him up, Zhang recalled.

The boy returned the cellphone and thanked Zhang after finished calling. Twenty minutes later, he got back to Zhang with a bag and said,“These were some things I bought for you.”

Zhang was moved to see a hamburger sandwich and a cup of porridge inside the bag. He didn't accept the bag of food but accepted gums offered by the boy instead.

“One source of love is from strangers.”

“I was tried one day and slept in a subway. Luckily, someone woke me up and prevented me from missing the stop. Today, I helped someone, too. Love needs to be passed on.”

“Be grateful to those who willing to lend their phones and helping hand. Society improves because of you.”