CHINA A hospital’s practices attract curiosity, but some former patients are not happy

A hospital’s practices attract curiosity, but some former patients are not happy

Chinese medical experts called for strengthening management of folk cures after a controversy regarding a hospital in Central China that used local injection to treat cerebral palsy and claimed a 97-percent effective rate, despite cerebral nerve injuries widely considered to be irreversible. 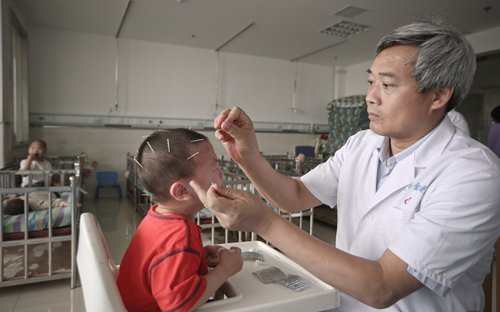 A doctor applies an acupuncture therapy to a child with cerebral palsy in Ruzhou, Central China's Henan Province in 2016. (Photo: IC)

In a video released by The Beijing News, which is believed to be first released material of children receiving the treatment, medical staff inject a child's head while the child, held by three adults, cried.

The hospital encountered strong backlash over the treatment after reports flooded social media with more netizens  claiming their children were misdiagnosed and given the cruel treatment. The cases of some children allegedly got worse after the treatment.

Zhengzhou health authorities launched an investigation into the hospital on October 23. The hospital has reportedly suspended the treatment and refunded parents since October 25.

During an interview, the hospital told the Global Times on Thursday that the investigation was still ongoing and refused to release any more details.

Acupoint injection is a frequently used practice in traditional Chinese medicine dating back to 1950s.

Wan Guolan, a doctor at the HMCHH located in Zhengzhou, Henan Province, came up with the idea to use it in treating cerebral palsy in 1991 as she thought that strong stimulation through acupuncture may revive dead or damaged cerebral nerve cells, Henan Business Daily reported in June 2018.

The hospital has used it to treat 381 patients diagnosed with cerebral palsy from 1997 to 2002.

The Global Times reporter searched the therapy on the hospital website on Sunday with no results showing up.

Online screenshots of the alleged therapy introduction on the hospital's website said the effective rate of the therapy in treating cerebral palsy reached 97.5 percent, and suggested patients at early age can be cured or "normalized" after the treatment.

The therapy makes incurable cerebral palsy curable, saving tens of thousands of children and filling in the blank in domestic medical history.

Several children in a vegetative state because of severe encephalitis required full consciousness thanks to the therapy, according to the screenshots.

The children would cry and struggle as it hurts so much, so sometimes seven or eight adults are needed to hold one child to avoid disturbing the treatment, a woman surnamed Wang told The Beijing News.

One child received injection 50-60 times during each time of treatment, according to Wang, whose son was misdiagnosed in the hospital of brain impair syndrome four years ago.

Many medical experts doubted the hospital's standard in diagnosing cerebral palsy, which is very complex and should take into account of many factors including the children's birth and growth history and results of detailed body check.

Deng Liqiang, director of the legal affairs department of the Chinese Medical Doctor Association, told the Global Times that cerebral palsy includes a series of syndromes like high muscular tension and inflexibility of arms and legs. "These syndromes could be eased or improved, but does not mean cerebral palsy is cured."

Cerebral palsy is caused by cerebral nerve damage and should be dealt with systematic treatment across different departments as no single measure could treat all the syndromes, Fan Cungang, a doctor in neurosurgery at the Peking University People's Hospital, told the Global Times on Wednesday.

According to the Chinese Advertising Law, adds for medical treatment, medicines and medical instruments are banned from including content assuring effects and safety.

Before applying the treatment in clinic, Wan tested it on chickens, pigeons and herself.

At first she injected children with normal saline. But the medicine the hospital uses includes vitamin B and some key monitored drugs in China like mouse nerve growth factor and gangliosides, which are neurotrophics whose effect still require demonstration, media reported.

Moreover, gangliosides could only be used in intramuscular injection rather than acupoint injection, according to the instructions.

Wan has not been reached by media as of Sunday since the controversy surfaced. But Zhu Dengna, a deputy director of the HMCHH, admitted in an interview with thepaper.cn that the sample size they tested on is comparatively low so evidence to support the therapy is not strong enough.

Zhu said the hospital would launch demonstration of the therapy and would improve or terminate its application if the results show it  harms patients.

"Although it has been used for many years, the treatment has not even officially listed by medical authorities as a 'therapy,'" Cui said.

Cui noted that, like many other folk cure measures in China, it is still not clear which authority should take responsibility to control and supervise the measure. "Clear clarification and strong management regulation are urgently needed," Cui said.

Deng also called for hospital ethics review committees, which would be responsible to deciding on the application of treatments, strengthen review procedure and enforce standards according to national law.