CHINA A journey to prosperity: Changes in Tibet since peaceful liberation

A journey to prosperity: Changes in Tibet since peaceful liberation

Peaceful liberation was a historic turning point for Tibet. With the signing of the 17-Article Agreement on measures for the peaceful liberation of Tibet on May 23, 1951, Tibet ended its old days of theocracy and poverty, embarking on a journey to democracy and prosperity.

Seventy years on, Tibet, under efforts of people from all ethnic groups, has successively undergone multiple reforms in various aspects, including social, economic and livelihood.

Milestones on the journey to prosperity

In 1959, Tibet started to implemented democratic reform and abolished the centuries-old feudal serfdom. Millions of serfs got liberated from the ruling of old Tibet's upper class and became the real masters of their life. 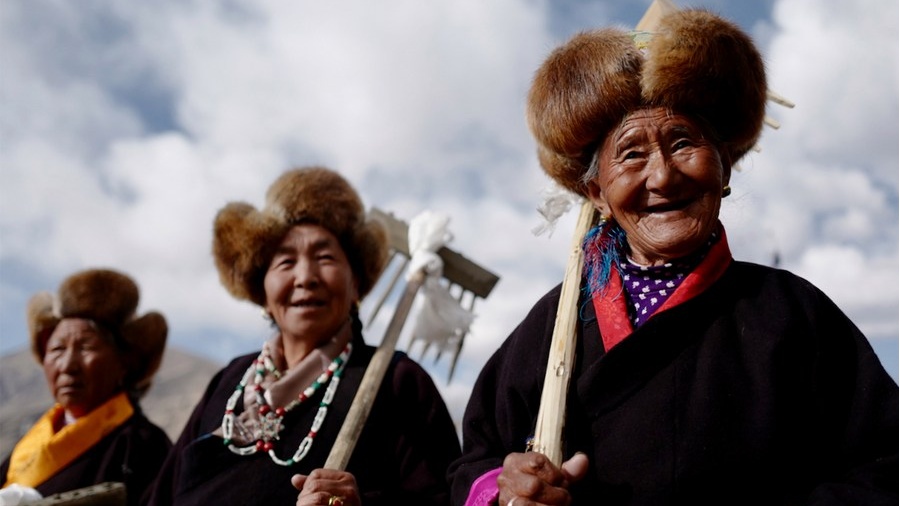 Economic reforms in Tibet started in 1980 after the Chinese central government held the first symposium on Tibet work. The meeting set the region's focus on economic development and pushed forward economic reform and opening-up in Tibet.

It was also during that meeting that the government decided to increase its investment, with a number of infrastructure projects planned to be carried out to facilitate the region's long-term development. The Qinghai-Tibet Railway, the world's highest and longest railway, is one of the landmark projects.

Tibet has long been recognized as one of the "hardest nuts to crack" in the battle against poverty. Thanks to consistent efforts from the central government as well as people from all walks of life, the history was rewritten on October 15, 2020 when Tibet, for the first time in history, declared eradication of extreme poverty.

Reforms together with support from the central government has brought significant changes to the society and people of all ethnic groups living in Tibet. Advances made in areas of poverty alleviation, economic development and education have been particularly remarkable.

The task of poverty alleviation in Tibet is regarded as the one with the highest cost and the greatest difficulty. The central government adopted the policy of targeted poverty alleviation to help the autonomous region get rid of poverty. It sent officials to provide paired assistance to villages and develop characteristic agriculture based on ground realities.

According to official data, since 2016, the government has invested agricultural funds totaling 75.4 billion yuan (about $11.73 billion) in poverty alleviation and launched 3,037 programs, benefiting more than 0.84 million people. As many as 193,300 resident officials in nine groups were dispatched to poverty-stricken villages from 2012 to 2020.

Through targeted poverty alleviation, Tibet, the once contiguous poor area with the highest incidence and most severe level of poverty, declared a decisive victory over poverty after lifting all the 628,000 registered impoverished population and 74 designated poor counties out of poverty. 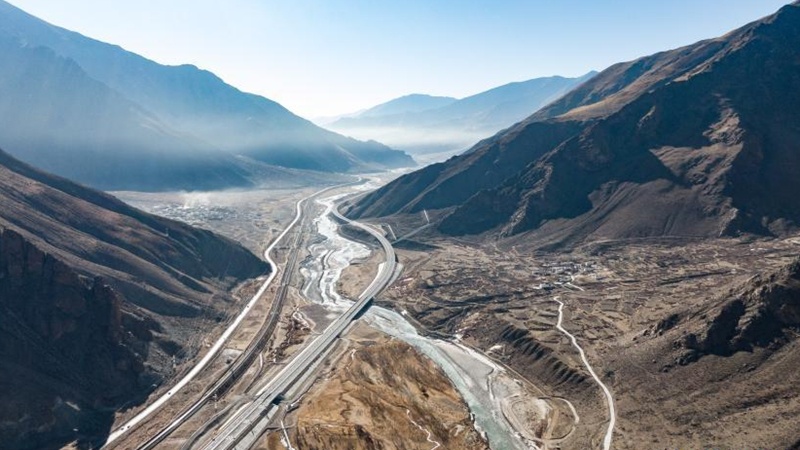 A part of the No. 109 national highway, the Qinghai-Tibet railway, a high-grade highway and a village-level road (L to R) between Lhasa and Nagqu, Tibet Autonomous Region, southwest China, January 28, 2021. (Photo: Xinhua)

Efforts were stepped up from 1994 after central and provincial governments along with state-owned enterprises input 52.7 billion yuan (about $8.20 billion) in Tibet through 6,330 projects.

Tibet has gradually set up a comprehensive transport network composed of highways, railways, air routes and pipelines, a modern communications network consisting of optical cables and satellites, and a comprehensive energy network of hydro, solar, wind and geothermal power.

As written in the white paper on Tibet's peaceful liberation, all administrative villages have realized full road connection, mobile access and full coverage of power grid.

From being poor to becoming prosperous, Tibet has come a long way in these past seven decades. With joint efforts of people from all ethnic groups, it plans to create more miracles in its pursuit of a better life.