CHINA A look inside the transformation of China's e-waste town

A look inside the transformation of China's e-waste town

Every day at 9 o'clock in the morning, Yang Chaochi comes to the central marketplace to buy bundles of electronic waste. Scrapped televisions, desktop computers, mechanical keyboards; all the old electronics that average consumers consider waste are valuable in Yang's eyes.

Yang, 42, has been using his bare hands to dismantle electronic waste for more than two decades. Initially working 1990s within the confines of his family's workshops, he used the most primitive way to dismantle gadgets – burning circuit boards over coal fire and washing them with acid to recover gold.

"Back then, every household was in the electronic dismantling business," Yang told CGTN. "Since none of us had the money to install pollution control equipment, we simply installed exhaust fans to release toxic gas to outdoor areas."

The southern town that Yang inhabited, Guiyu in China's Guangdong Province, was regarded as the heartland of China's electronic waste disposal. Back in 2012, a total of 17,282 residents in Guiyu were in the dismantling business, processing 1.07 million metric tons of e-waste annually, according to data provided by township authorities. 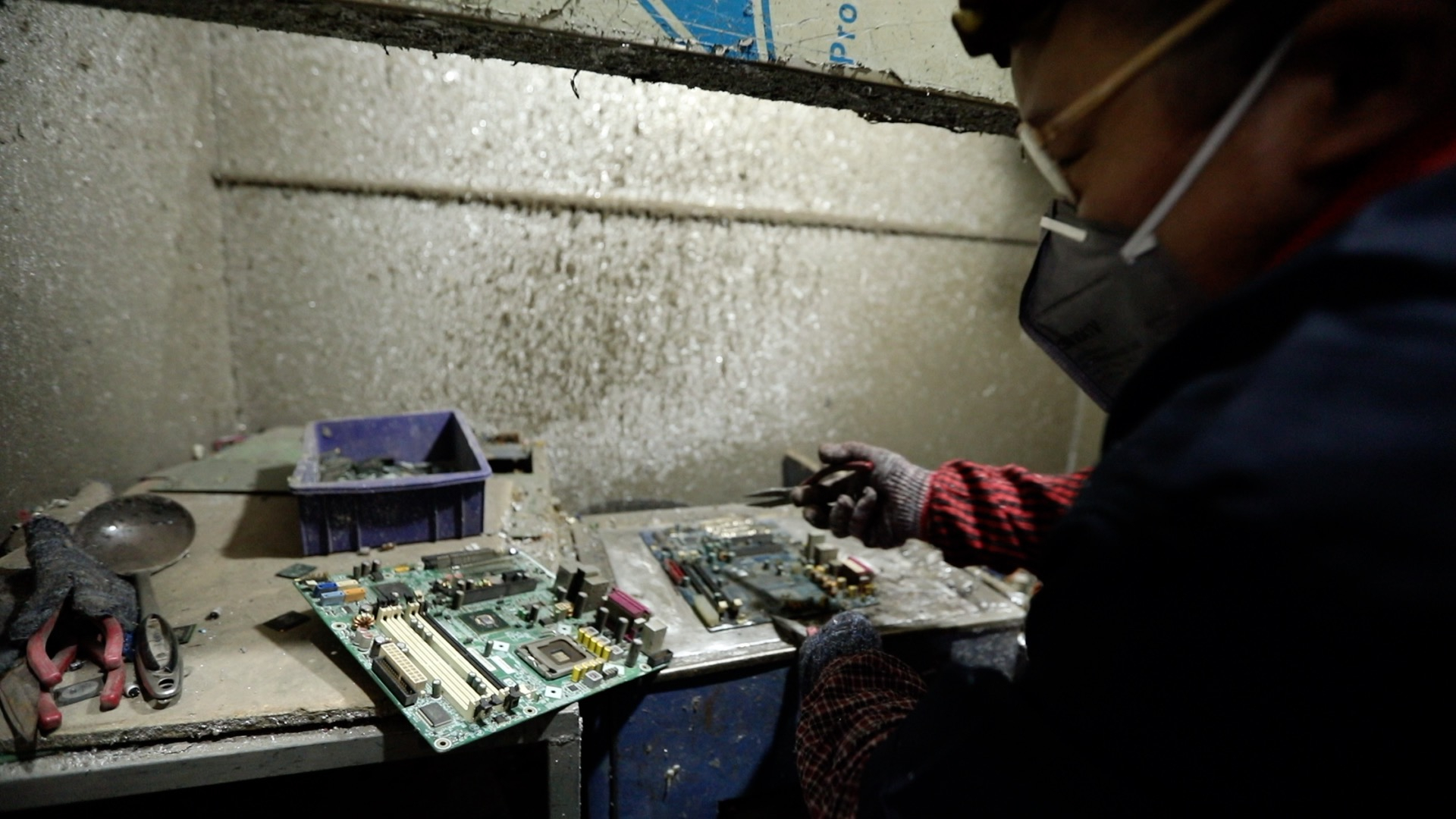 The circuit board is heated to melt down casings. (Photo: CGTN)

"The air in Guiyu had an acrid stench, like the smell that is released by leaving a cast iron pot empty on high heat for hours," said Xu Yinbiao, director of the soil and ecology division at the Shantou Ecology and Environment Bureau. Almost every family kept the air conditioner running 24 hours a day throughout the year because the air was so toxic outside that no one dared to open the window, he added.

The turning point came in the early 2010s when China declared war against pollution. In 2015, the Guiyu Circular Economy Industrial Park came into operation. All informal e-waste businesses were required to relocate to the industrial park.

In the beginning, there was resistance. Zhao Shaoxiong, deputy director of Guiyu Circular Economy Industrial Park, recalled in an interview with CGTN that he, together with local officials, went to visit almost all informal family workshops in Guiyu to persuade residents to make the move.

What they pursued was a carrot-and-stick approach: offering a subsidy of up to 2,000 yuan (280 U.S. dollars) for every makeshift chimney dismantled by the household and issuing an outright ban on electronic dismantling outside the industrial park, according to Zhao. 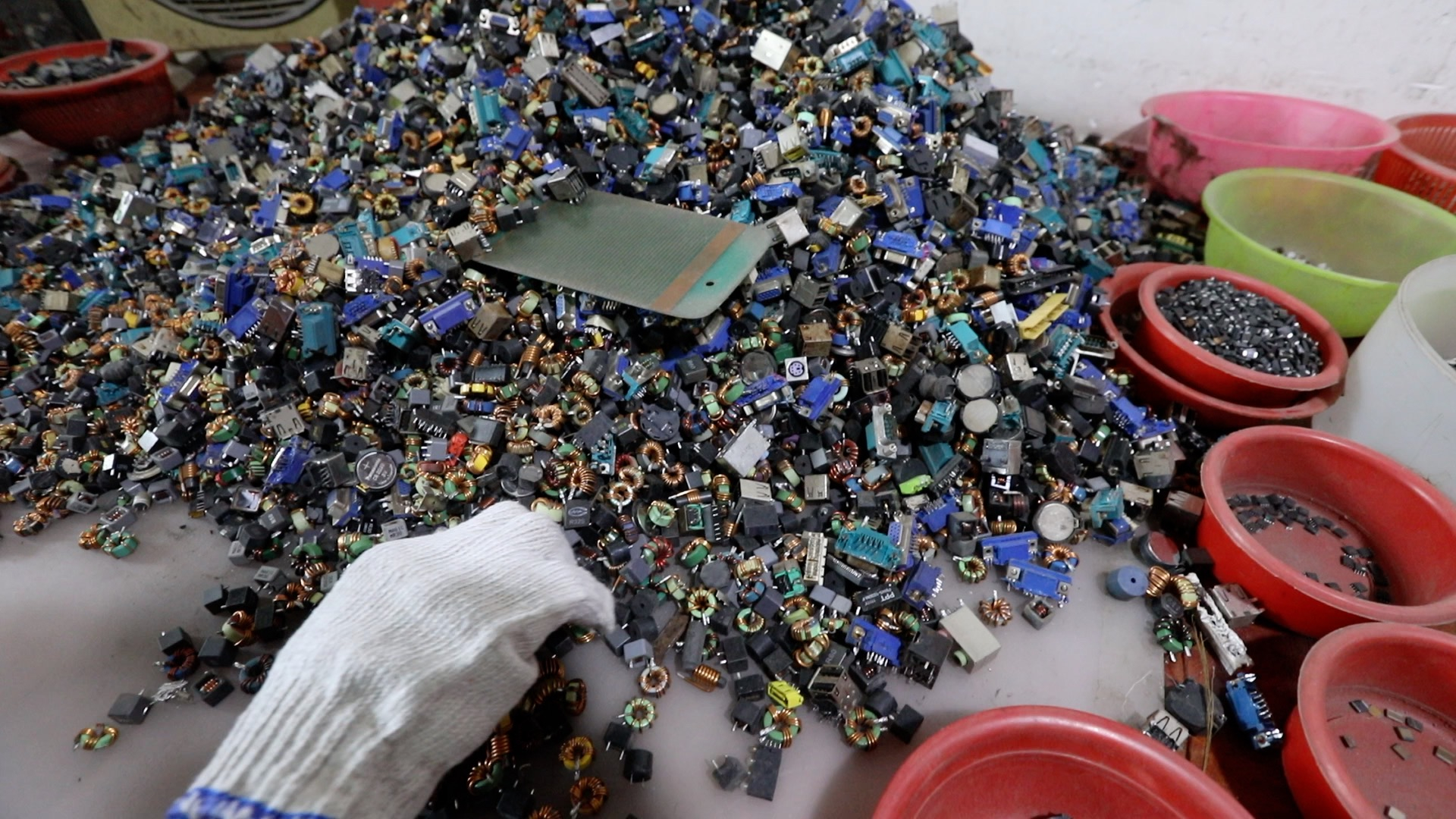 In the end, a total of 1,243 households moved into the industrial park, forming 563 workshops falling under the administration of 29 recycling firms. Apart from dismantling workshops, the park is home to TCL Deqing, a local branch of TCL that built up a production line for dismantling electronics in the park, a water treatment plant and a smelting complex.

Those recycling firms, on the other hand, are required to pay rent to the industrial park; in return, they are entitled to services it provides.

"After we moved into the industrial park, the management team here helped us build the dismantling workshop, and they installed smokestacks for us to capture emissions," said Yang Chaochi, a 42-year-old recycler.

In addition, the industrial park also set up an online system that keeps record of all supply, dismantling and re-sale of electronic waste. Recyclers are required to log in to the system and indicate the amount and types of electronic waste they want prior to purchasing them at the central marketplace. After dismantling, they are required to send all the clean circuit boards to the smelting complex. 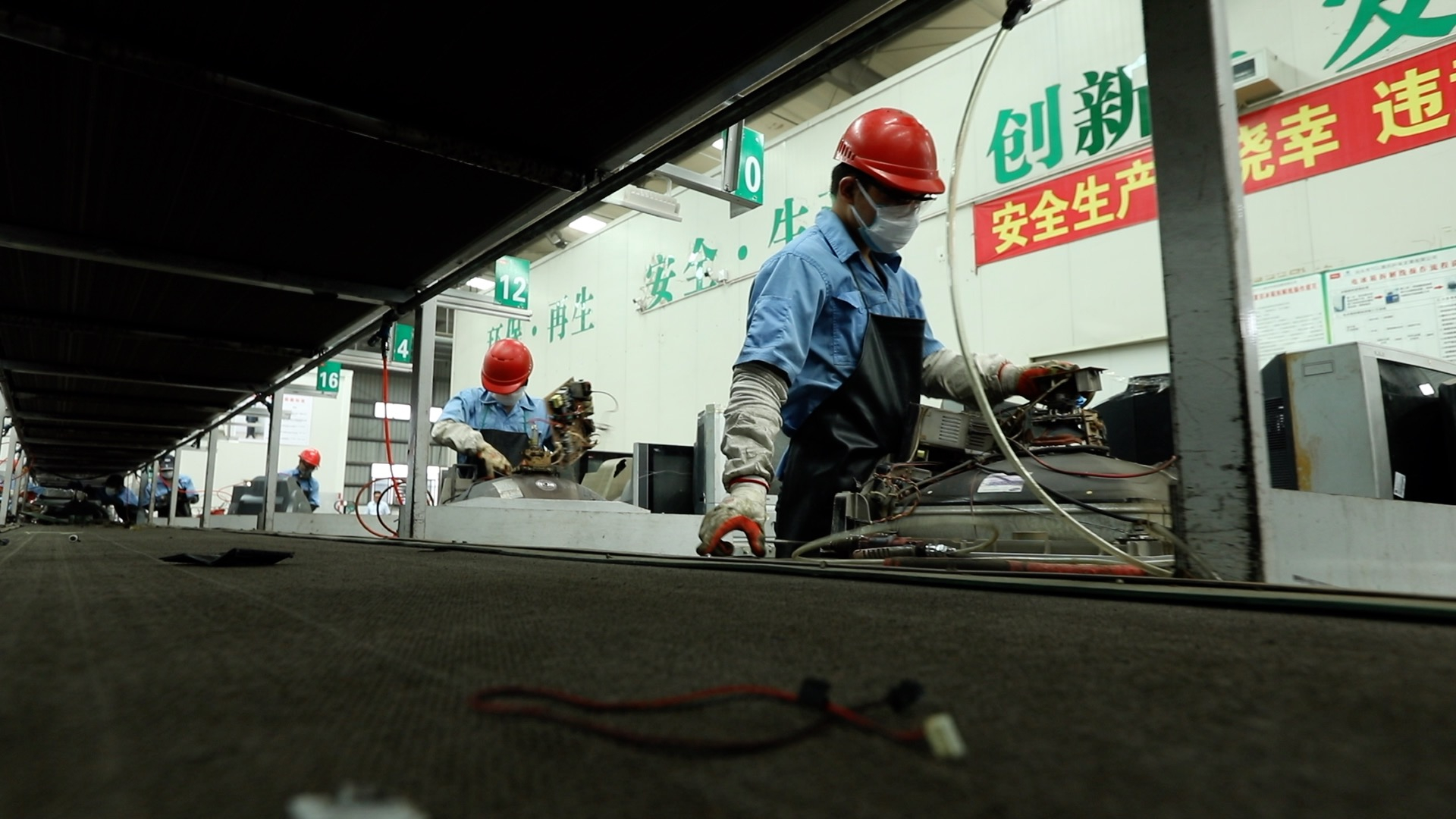 The goal is to have zero waste in the industrial park – all components that can be reused are recycled; the rest is for the extraction of valuable materials.

But the biggest difference brought by the industrial park lies in how the extraction process plays out. In the industrial park, workers are only responsible for dismantling the electronic scrap. The extraction of valuable metals, the process most likely to create hazardous gas and water, is now conducted by two certified companies.

By restricting the authority to extract valuable metals to two certified companies, it effectively reduces the chance of illegal waste disposal and protects the environment, Zhao said. 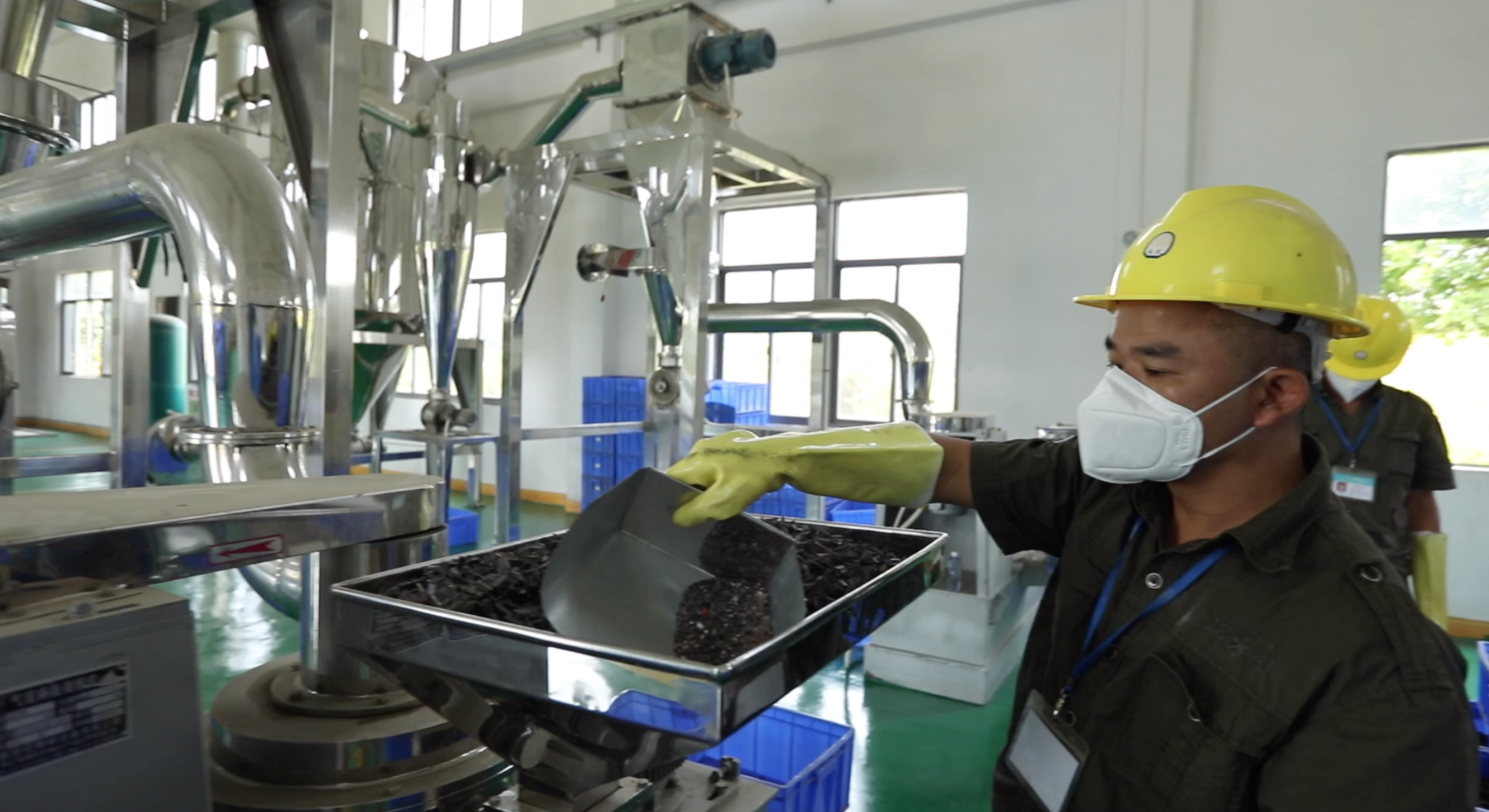 One of the two certified companies responsible for extracting gold from print circuit boards. (Photo: CGTN)

But a breakdown of the figure shows that the two certified companies have not yet lived up to the expectation of zero waste.

CECEP (Shantou) Recycling Resources Technology Co. Ltd. is the recycling firm dedicated to recovering copper from circuit boards in the industrial park with a fire-refining method. In 2018, it had an annual processing capacity of 3,137 metric tons, less than the total amount of dismantled circuit boards produced in the park.

The other certified company, Deqing Recycling Resources Technology Co. Ltd, is responsible for extracting gold and can process up to 1,000 metric tons per year.

The processing capacity has not reached its desired levels because the cutting-edge technology was not mature enough at the initial stage, though it has been on a steady rise, said Huang Wen, the general manager of CECEP (Shantou) Recycling Resources Technology Co. Ltd. 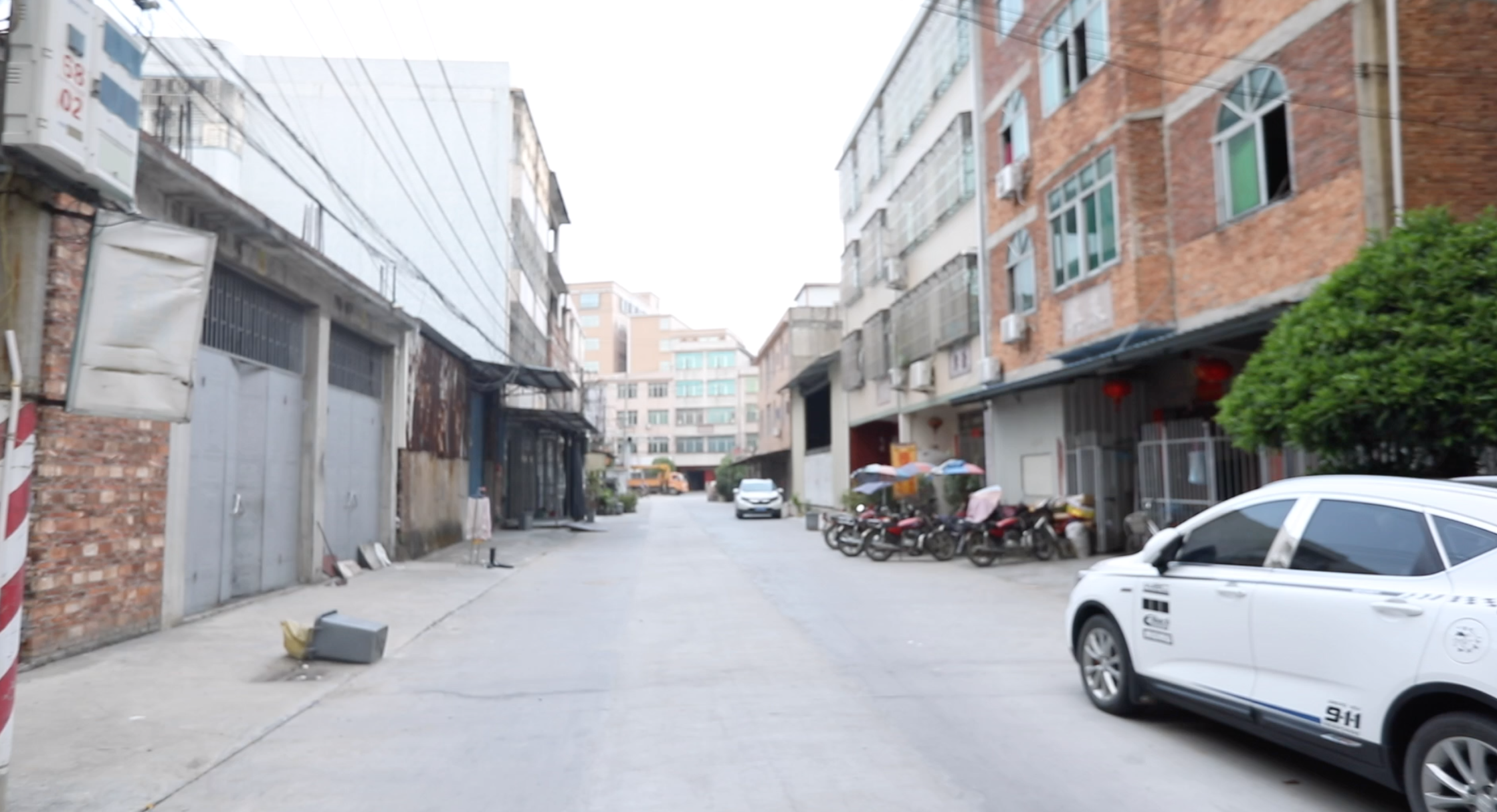 The defining features of Guiyu, makeshift chimneys built to expel toxic fumes from households, are nowhere to be seen. (Photo: CGTN)

There are doubts that the once lucrative business of valuable metal extraction – no longer in the hands of small workshops – could mean lower incomes for recyclers.

As we walked along the the Lianjiang River, which runs through Guiyu, we met Chen Hongxiong, a 62-year-old local resident who also worked in the electronic dismantling industry when he was younger.

Pressed if he saw a decline in his earnings after moving his business into the industrial park, Chen said there was no clear answer since resource extraction is a cyclical business. But at its highest point, before the 2000s, recyclers in Guiyu earned over 20,000 yuan per month, according to Chen.

Even though moving into the industrial park means he needs to pay rent and management fees, it was a trade-off he was willing to accept.

Pointing to a few sites where residents washed burned circuit boards with acid, he said there were once no fish in the town's lifeless rivers. Now, as he spoke, a white crane flew over the river.

"Even if there is a decrease in income, you get a more regulated business that is better for the environment and for family households," he said.