CHINA A mega-project that bridges the gaps

A mega-project that bridges the gaps 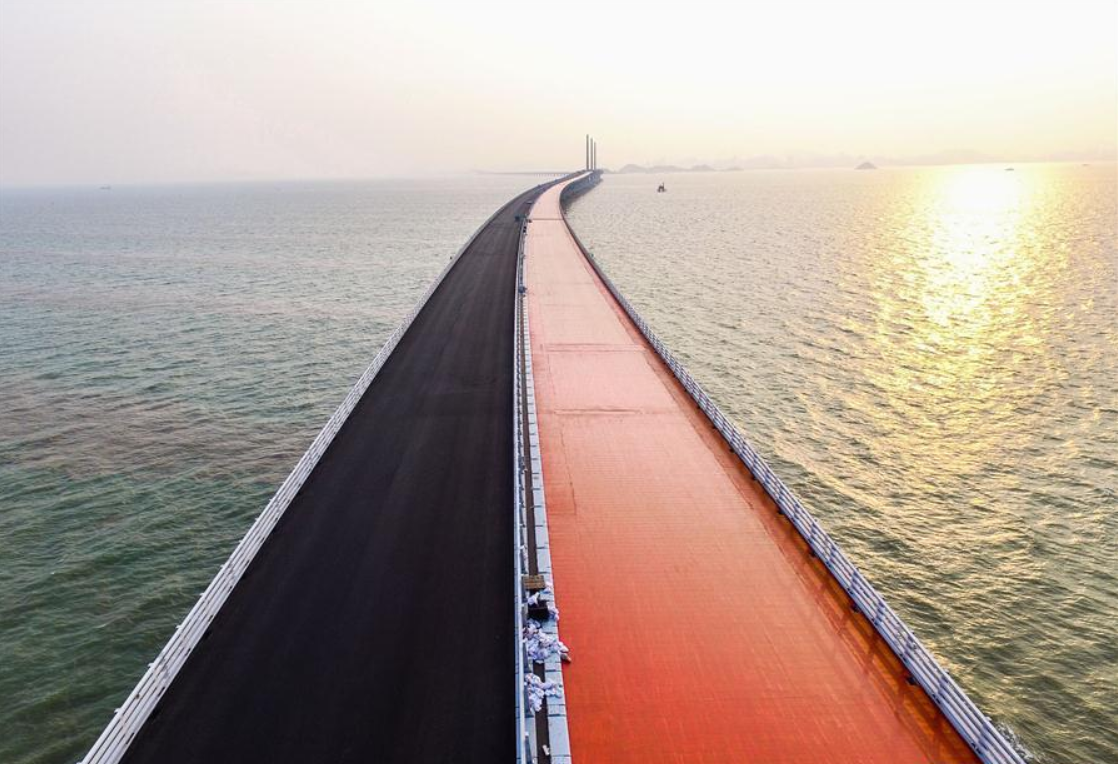 Photo taken on April 29, 2017 shows the bridge floor of the Hong Kong-Zhuhai-Macao Bridge under construction in the Lingdingyang waters, south China. (Photo: Xinhua)

ZHUHAI, Guangdong, Oct. 22 (Xinhua) -- Traffic jams are nothing new in China, and during national holidays, the roads can get unbearably congested as millions travel across the country to be with family and friends.

“We were stuck in traffic for more than 15 hours during the last National Day holiday,” bus driver Xu Huiping said, gesturing to his colleague Li Zhiguang.

“Yes, a lot of cars and buses and terrible traffic jam,” agreed Li.

“Given the choice, we’d take the bridge for sure,” Xu continued as Li nodded knowingly.

The bridge in question is the epic 55-km Hong Kong-Zhuhai-Macao (HKZM) bridge. A new mega project, leaping across the waters of the Pearl River Delta in southern China, that will open to traffic on Oct. 24. It connects three regions, each with their own social systems, economic structures and even different languages.

Xu and Li are from two of these regions: Xu from Guangdong, and Li Hong Kong. They’ve worked together at the same tour company for more than 20 years.

Tourism was one of the first industries to really benefit from the increasing inter-connectivity following the return of Hong Kong to China in 1997 and Macao two years later.

Two decades ago, however, the infrastructure just wasn’t there to support such rapid growth.

“Back when I started, in 1997, there was no bridge or highway,” said Xu. “It took more than four hours to get from Jiangmen to Hong Kong.”

Li, too, remembers the convoluted routes of the past. “We had to take ferries across the water, and there were far fewer buses and cars on the road back then.”

It’s not surprising, then, that infrastructure across this relatively small, but heavily populated area is so important. What’s now known as the Greater Bay Area includes Hong Kong, Macao and nine cities in Guangdong. It’s home to more people than the entire UK, has three of the biggest container ports in the world, and a larger GDP than Australia.

The bridge will cut the once arduous journey, from Zhuhai to Hong Kong, to just half an hour, but this is just a piece of the puzzle. With high speed rail finally connecting Hong Kong to the mainland network and infrastructure projects in progress across the Pearl River Delta, this is about multiple mega-projects knitting together an entire region.

Despite China’s wealth of experience with projects of this scale, the HKZM bridge was not without its headaches. The tunnel was one of the biggest. It may seem odd to build a bridge across the sea only to dive beneath the surface for almost 7km, before emerging to continue over the water, but it was a necessary compromise.

“Part of the bridge crosses two of Guangzhou Port’s shipping lanes,” explained Li Jiang, a project manager with HKZM Bridge Authority. “If we were to build a bridge above these lanes, it would have to be very wide and tall.”

“Building a tall bridge was not an option,” said Li. “This tunnel was our solution.”

This compromise may have solved problems, but it also created challenges.

“Technically speaking, we were at a loss in terms of existing long sea bridge projects that we could learn from,” said Luo Dong, vice general project manager for the Island and Tunnel Project of the bridge. “The water conditions of the Pearl River Delta are so complicated. Building a bridge and tunnel system in this area was a real challenge.”

It is certainly a monumental structure. Made from enough steel to build 60 Eiffel Towers and enough concrete to construct 22 Chrysler Buildings, it can withstand Magnitude-8 earthquakes, and is even prepared for super typhoons. This is something built to last a century of service.

The difficulties were not just technical. A project of this size and scale has to take into account all kinds of environmental factors. One particular concern was the Chinese White Dolphins that inhabit the delta.

“We had to monitor the dolphins constantly during construction,” says Luo. “We also had to minimize noise that might disturb marine life and retrieve all the construction waste from the sea.”

These measures seem to have paid off. In eight years of construction, there was not a single report of a Chinese White Dolphin death nor any big losses to fish stocks that could be attributed to the project.

Aside from protecting the wildlife, there were plenty of potential pitfalls concerning the people. Across the three regions, there is a great variety of people with different needs and concerns. Is it even possible to get everyone on the same page?

Once considered much poorer and undeveloped, the western side of the bay, including Zhuhai, has seen increasing investment, spurred by infrastructure like the HKZM bridge. Today the city has beautiful promenades leading up to the bridge, lined with palm trees and art installations. Families and couples staying in nearby hotels stroll along taking in the view. On a clear day you can almost make out Hong Kong island.

There are still nuances in the cultures and economies around these same waters, but the economic successes of the past few decades are being shared around. Integration is ongoing, with policies concerning everything from household registration to customs clearance being implemented by the local government in Guangdong.

Today, the Greater Bay Area is a poster child for China’s economic growth. Guangdong, Macao and Hong Kong are becoming closer and the boundaries between cities and regions are blurring. If the 21st century is defined by globalization and inter-connectivity, then the HKZM bridge shows that China is ready and willing to embrace the future.

“We’re excited for the opening of the bridge -- the sooner the better,” said Li, grinning at Xu. “Excited but not surprised!” replies Xu. “Around here, things are on the up-and-up.”