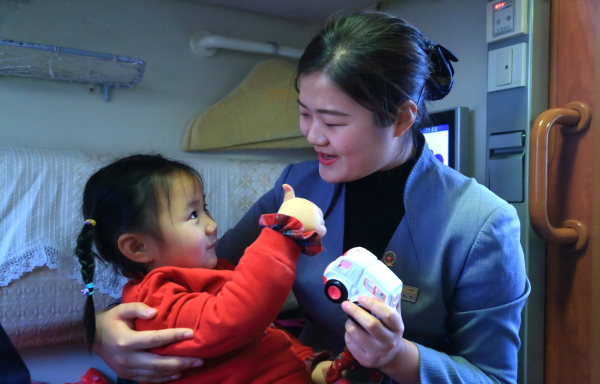 Caring for and playing with children has become a new task for the attendants on a train running along the 3,056-kilometer route from Changchun, Northeast China's Jilin province, to Xiamen, East China's Fujian province, since Spring Festival travel rush began on Monday.

Since launched in December 2014, the Z102 train has been a popular option for migrant workers who come from Fujian and earn a living in northeastern China to go back home for reunion in Spring Festival, the most important event in the Chinese lunar calendar.

And the migrant workers usually take their children with them on their journey home for the festival. During the travel rush, the number of children under five usually accounts for 30 percent to 50 percent of the thousand-plus passengers, according to cnjiwang.com. 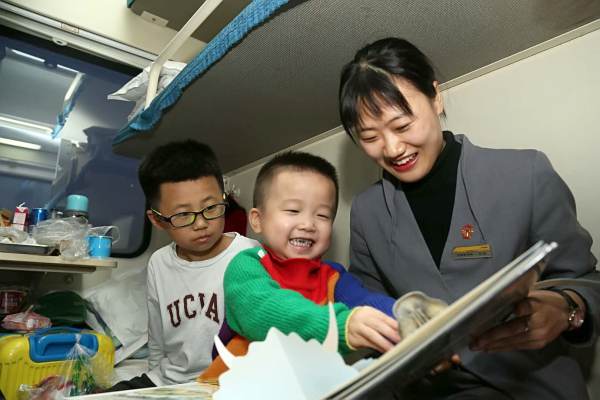 An attendant plays a pop-up book with children on the train Z102 running along the 3,056-kilometer route from Changchun, Jilin province, to Xiaman, Fujiang province, Jan 21, 2019. (Photo: cnjiwang.com)

To adapt to such situation, the train operator offers special services catering to children.

Toys, colorful books, feeding bottles, breastfeeding clothes and other baby care products are loaded onto the train. Attendants accompany the young passengers through the long trip and do fun activities including playing games, drawing and storytelling with them.

They divide the children passengers into three groups by their age and needs: one-year-old to three-year-old; four-year-old to six-year old and seven-year-old and the older, and treat each group with different methods.

There is also assigned attendants and volunteers to introduce to kids the scenic spots and history of the places by which the train passes, making the trip a journey of knowledge.

"Our family takes this train to go back home for Spring Festival every year. The attendants amuse my kids and play games with them. There are also many baby care products on the train. They make better preparations for kids than parents do and provide us a cozy and comfortable train trip home," a passenger surnamed Wang said.