CHINA A passion for periodicals

A passion for periodicals 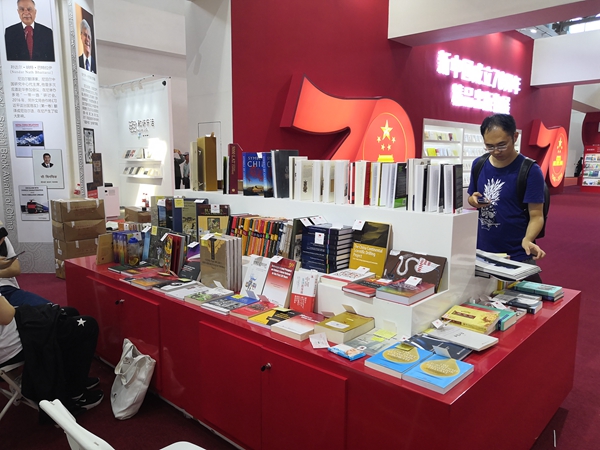 People visit the import-export publications section of the Exhibition of Select Publications to celebrate the 70th anniversary of the founding of the People's Republic of China at the Beijing International Book Fair, held over Aug 21-25. (Photos: China Daily)

An exhibition at this year's BIBF featured 4,000 books and 1,000 magazines in four categories, including rare first editions, Wang Ru reports.

When Yury Tavrovskiy was a student at St. Petersburg State University in the 1960s, he learned Chinese language and calligraphy, read poems from the Tang Dynasty (618-907) and novels of essayist and translator Lu Xun (1881-1936), and also studied the oracle-bone inscriptions of ancient China.

His knowledge about China helped him in his later career as a Russian Sinologist who wrote and translated works about China. On Aug 20, Tavrovskiy received an award during this year's Special Book Award of China for his work introducing Chinese culture to the world.

Tavrovskiy's photos and other representative works were featured at an exhibition of selected fine publications over the past 70 years to mark the establishment of the People's Republic of China at this year's Beijing International Book Fair, which was held over Aug 21-25.

Organized by the National Press and Publication Administration and the China National Publications Import & Export Group, the exhibition was held to show the development of Chinese publications since the founding of New China.

The Exhibition of Select Publications to celebrate the 70th anniversary was divided into four sections: journals, imported and exported publications, award-winning books and classic books published after 1949.

The journal section featured more than 1,000 magazines, including award-winning titles and famous first issues. The highlight was a copy of China Youth magazine published in 1963 that bears Chairman Mao Zedong's inscription "learning from Lei Feng".

"Many Chinese people are familiar with this saying, which encourages them to learn from role model Lei Feng, but they may not know this saying first appeared in this magazine because China Youth wanted to publish a special issue at that time to commemorate Lei, and Chairman Mao wrote this inscription for it," says Duan Yanwen, chief editor of the China Periodical Yearbook and the curator of the journal section of the exhibition. 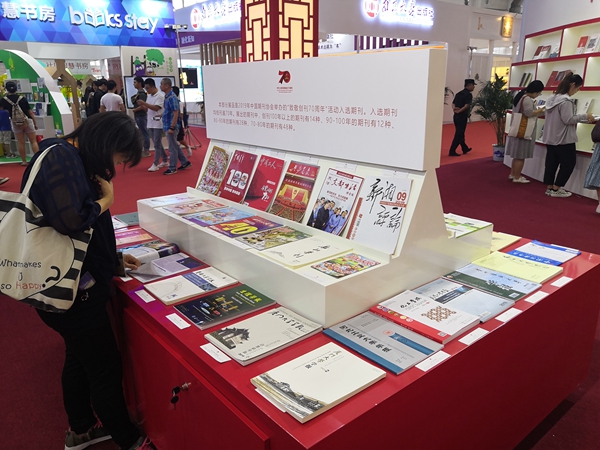 People visit the journals section of the Exhibition of Select Publications to celebrate the 70th anniversary of the founding of the People's Republic of China at the Beijing International Book Fair, held over Aug 21-25.

In a section dedicated to longstanding titles, a periodical called the Chinese Medical Journal was set out on display.

At the imported and exported publications section, visitors can chart the introduction of foreign books to China and Chinese books to the outside world. In recent years, especially since President Xi Jinping first proposed the Belt and Road Initiative in 2013, Chinese books have been translated into an increasing number of languages. Some examples of works translated into Swedish, Vietnamese and Arabic could be seen at the exhibition.

According to the organizers, countries involved in the Belt and Road Initiative were the most popular destinations in terms of copyright deals, and books about Chinese political ideas, literature, science and technology, and children's books were the most well-received genres among foreign publishers.

Many of the Chinese books that have already been translated into multiple languages displayed at the exhibition centered on political theory, especially Xi's theories and visions, literary works by Lu Xun, Liu's science fiction works and even some picture books.

Photos and representative works of 15 foreign writers, translators and publishers who made important contributions to the spread of Chinese culture around the world were also listed in this category, including Tavrovskiy's work Xi Jinping: Governance Thought in Shape, the first book published in Russia featuring the writings of Xi.

"I want to help Russians understand more about China, which I believe is beneficial not only to both countries, but also to the shared future of humanity," Tavrovskiy said at the awards ceremony of this year's Special Book Award of China.

The exhibition of award-winning books included I Belonged to You, China Album and Elegant Song: The Visible Civilization-winners of the annual China's Books award, and the Chinese Government Award for Publishing winner New Structural Economics: A Framework for Rethinking Development and Policy.

The exhibition of classic books published after 1949 featured a range of iconic 20th century titles, including the Selected Works of Mao Zedong, Keep the Red Flag Flying and The Song of Youth.

A total of more than 4,000 books were displayed at the exhibition.