CHINA A path to brightness

A path to brightness

Dai Bo (seventh from left), a teacher at the Central Conservatory of Music, and his former teacher Sheng Yuan (eighth from left) pose together with their colleagues as well as student performers after concluding a concert held at the Forbidden City Concert Hall last year. (Photos: China Daily)

Strange days are afoot as the pandemic has forced people to stay at home. Like many others, Dai Bo, 32, a teacher at the Central Conservatory of Music, managed to work from the confines of his own abode.

He has been giving online music classes to his students. He also focused on his own composition and music research. This has been the experience of many, but tackling and overcoming adversity is what Dai does best. This pandemic was just the latest test of his will.

Dai was diagnosed with glaucoma and underwent his first surgery at just 5 months old. He has undergone many operations and suffered symptoms, such as severe headaches and blurred vision. He couldn't play with other kids as a child due to optic nerve compression and declining eyesight. This created an overwhelming sense of frustration and life at home could be difficult.

It was music that saved him. Dai considered it to be his "salvation".

While other kids in the kindergarten played outside the classroom, Dai's hands would be rippling over the keyboard of an organ. His parents got him his first piano at 6 years old.

"Music makes me relaxed and comfortable. I feel calm and peaceful when playing music," says Dai from Jilin province. "Though my vision worsened, I still wanted to learn to play piano, as it is the way for me to communicate with the world."

At age 8, Dai was playing with Liu Shangkun, a pianist and music educator from Jilin University of Arts. Dai's talent was obvious.

He was enrolled to study at the affiliated middle school of the Central Conservatory of Music in Beijing at age 13, and four years later, he was enrolled at the conservatory with a major in composition. Two years ago, he obtained his PhD from the university and became a teacher there. 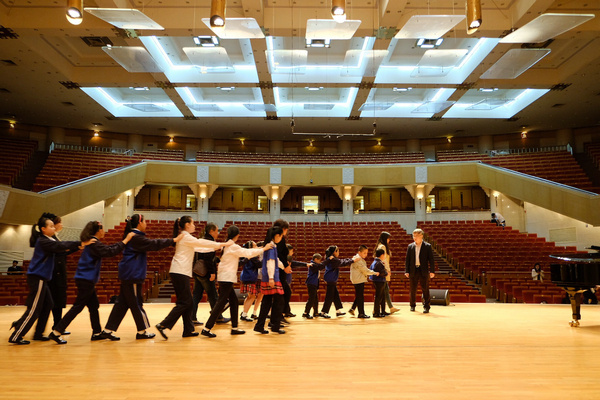 Sheng Yuan (right) leads his students as they get familiar with the stage during a rehearsal before their debut concert as part of the charity project, named Musical Path to Brightness, at the Forbidden City Concert Hall in October 2018.

"I try to dispel the misconception that blind music students can't see. I 'read' the scores with the help of technology and I 'see' with my mind and with my fingers. I encourage all my students to play music with their imagination rather than playing music based simply on the scores."

Dai used to read scores with a magnifier, but lost his full sight around 2013. While preparing for his postgraduate dissertation, he had to ask for help from a classmate, who read all the materials he needed for the essay.

He loved reading books and one of his idols is Argentine writer Jorge Luis Borges (1899-1986), who went blind in 1955, in his mid 50s. Borges once wrote about the irony of going blind and becoming director of the National Library in Buenos Aires at the same time. "I speak of God's splendid irony in granting me at once 800,000 books and darkness," Borges noted.

Dai composed an original music piece, titled Mountain Cannot Be Seen, inspired by the story of Borges. He seems to echo Borges' thought with similar experiences. "I collect original music scores, which cost me lots of money. I have over 1,000 music scores, which is like my personal library. I could read them with a magnifier, but now I cannot see at all. Despite this, I still keep the habit," says Dai.

Sheng Yuan, 48, one of Dai's teachers, says: "Learning music brings both challenges and comfort to people with visual problems."

He had taught Dai when he pursued his master's degree at the university from 2010 to 2013. "When I met Dai Bo, he played the music of Bach and Brahms. He is a talented musician."

Sheng learned to play piano at age 5 and completed his bachelor's and master's degrees at the Manhattan School of Music in New York. He launched a project, named Musical Path to Brightness, in 2018, aimed at educating visually impaired students to learn to play piano.

Since then, Sheng took his students on a tour across the country. He hopes that more people will recognize their musical talent and more music schools will offer them opportunities to further their studies, which may enable them to become professional musicians.

"For the people with disability, art training helps satisfy their spiritual needs. When they rehearse together, they make friends and communicate. When they perform onstage, they are happy and confident," says Zeng Guanghai, 50, who was born in Linyi, East China's Shandong province, and graduated from East China Normal University with the master's degrees in singing and composition.

He joined as the director of the Zhejiang Provincial Disabled People's Performing Art Troupe in 2018, which has around 50 singers and dancers aged between 16 and 50.

He led the troupe on a provincial tour last year to celebrate its 30th anniversary and staged over 40 performances in villages and schools. The troupe also collaborates with the China Disabled People's Performing Art Troupe through exchange training programs and joint performances.

"I had the experience of teaching disabled students to sing, but I had never expected to join an art troupe for people with disabilities," recalls Zeng. "At first, I felt reluctant to take this job but now it has become my dream to help more people."

In June, Zeng started to give vocal training to a blind student, 18, who returned from the United States amid the pandemic. The student had learned to play piano and joined in children choruses at a young age.

"Though he couldn't see, he has a good memory and is keen on exploring new musical pieces," says Zeng, adding that the student will continue his study of music therapy in the US.