CHINA A rubbish job: collecting garbage on the roof of the world

A rubbish job: collecting garbage on the roof of the world 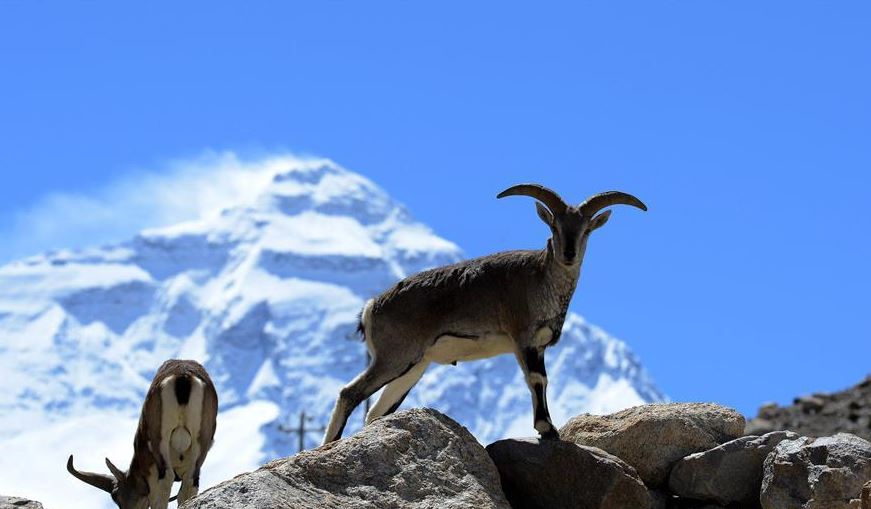 LHASA, Jan. 19 (Xinhua) -- Trash collectors are desperately needed on Mount Qomolangma, as tons of waste is being left on the famed peak by ever-increasing numbers of visitors.

The climbing season starts at the end of March, finishing at the end of May. When the season ends, a cleanup campaign will be carried out on all areas above 5,100 meters.

Picking up garbage on Qomolangma is no easy job, and takes two to three years of training and adjustment, according to Cering Dandar, a legendary mountaineer and guide.

"This may sounds cruel, but just picking up a single ring-pull at over 7,000 meters could be a matter of life or death!" said the 32-year-old elite climber.

He once spent a whole day wriggling gingerly through the ice, just to pick up two oxygen tanks and a plastic cookie bag. Falling into one of the mountain's seemingly bottomless cracks has become his worst nightmare.

Cering's life journey has been an epic one. Leaving home at the tender age of 18, he became one of China's first Tibetan climbing guides and has climbed the highest summits of seven continents, not to mention hiking to the North and South poles -- all in less than five years.

Young Cering first noticed trash scattered along the mountain's tracks during his first ascent in 2006. "Cans, Chocolate, oxygen tanks, tents and sleeping bags. Their colors just don't belong here where everything should be white and blue."

Now the successful climber has came back to where it all started, but this time to protect the colossal mountain.

In 2018, Cering became a founding member of the Mount Qomolangma environment squad. The team has carried out major cleaning above 5,200 meters at the base camp of the northern face of the mountain three times.

This time around they have collected more than 5,000 kg of food garbage, 1,000 kg of deserted climbing equipment, and over 2,000 kg of human feces from just three privies.

Next year, they will have to do it all over again as a similar amount of domestic garbage will be produced at the the camp.

It is almost impossible to clear all the waste on the mountain. Some of it is simply unreachable, while the rest must be gathered by pickers and put into two big containers at the camp. A single expedition can take eight hours.

The collected trash must be treated 100 kilometers away, and the only road is a zigzagging track that offers little protection. It is not trucks, but yaks that are generally used to make the journey.

Avalanches, blizzards, altitude sickness -- working on Qomolangma is perhaps one of the most dangerous jobs on earth.

The mountain environment squad is made up of 30 members, mostly guides or liaison officers from the climbers' association. Dondrup is one of only three locals on the team.

The three of them pick up garbage from between 5,200 meters at base camp and 6,500 meters. In the off-season, Dondrup is a doctor in Tosanglin village at the foot of the mountain, but has been working as a trash collector during the climbing season for three years.

"We do a lot of walking. One worker collects only 10 kilograms of garbage each day," the 30-year-old said. Dondrup is paid 4,500 yuan (about $714) every month, not much compared to villagers working in other sectors.

"I don't do it for money. My family have lived here for generations. It is my job to protect the mountain," he said. "A lot of tourists and climbers come and leave a lot behind. We must work hard to keep up."

From 6,500 meters, only professional mountaineers like Cering can do the job. At above 7,000 meters -- the death zone -- even professional climbers face physical limits. Any unnecessary movement is risky and can cause the loss of life.

Reaching 8,000 meters, and even the guides suggest climbers abandon their equipment, such as oxygen tanks which weighing about 2 kg each.

Penma Trinley, deputy director of the Tibetan Mountaineering Association, said the garbage dumped on the mountain one year is usually taken down the mountain the next so that safety is maintained as the key priority.

Since last year, Qomolangma cleaning work has been better organized.

Domestic garbage is classified as recyclable and non-recyclable, and handed over to Qomolangma nature reserve administration.

Abandoned equipment is carried back to Lhasa, where it is auctioned or turned into art.

Tibet regional sports bureau gives two garbage sacks to each climbing team. Everyone descending the mountain needs to carry at least eight kilograms of garbage. If their garbage weighs less than that amount, they are fined.

Volunteers and amateur climbers, though often suffering altitude sickness, have also done their part, picking up bottles and plastic bags whenever possible.

Protecting the holy mountain goes far beyond just picking up trash. New legislation has been enacted at the Mount Qomolangma reserve to conserve the environment surrounding the mountain.

New discipline has been set for mountain-climbing, tourism, scientific exploration and engineering projects.

The legislation prohibits tree-felling, herding, hunting, as well as collecting and sabotaging turfs in the reserve. Those that disobey the rules are subject to criminal punishment.

Cleanup teams are also to be set up on Mount Qowowuyag and Mount Shishabangma, which are both over 8,000 meters high.

"In Tibet, we have the bluest skies and highest mountains," Cering said. "If I could choose again, I would still become a guardian of the holy mountain."