CHINA A shares react to US sell-off

A shares react to US sell-off 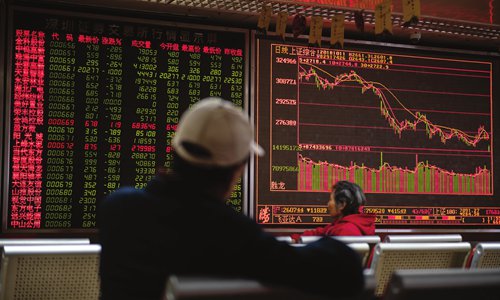 Investors watch stock prices fall on a screen at a securities company in Beijing on Thursday. Asian markets plunged following the worst session on Wall Street in months, after US President Donald Trump said the Federal Reserve had "gone crazy" with plans for higher interest rates. (Photo: AFP)

Experts said that mainland markets will eventually turn bullish despite external influences, and investors should take advantage of "investment chances" during the slump.

Gao Feng, a spokesperson of the Chinese Ministry of Commerce, said at a routine press conference on Thursday that China should "walk its own way and do its own job" regardless of the changes in the external environment and no matter how those changes might affect China.

Gao's comments come after the two mainland bourses experienced a sharp decline on Thursday. The Shanghai Composite Index plunged 5.22 percent, or 142 points, to 2,583 points on Thursday, while the Shenzhen Component Index dropped 6.07 percent, or 486 points, to 7,524 points.

A total of 979 stocks plunged to their daily trading limit of 10 percent, with liquor and high-tech stocks leading the plunge.

The mainland stocks plunged following a bloodbath on US stock markets overnight. The S&P 500 slumped 3.3 percent to end at 2,785.68 points, while the tech-rich NASDAQ Composite Index plummeted 4.08 per cent to finish the session at 7,422.05 points on Wednesday.

NASDAQ continued its downward trend in early trading on Thursday, slipping 0.5 percent to reach 7,385 points as of 9:45 pm Beijing time.

Li Daxiao, chief economist at Shenzhen-based Yingda Securities, suggested the government bolster receding confidence in the market by rolling out measures to "stabilize the markets."

"At this moment, investors should not panic, but deal with investment more rationally," Li said.

Chinese experts pointed out that the A-share market's slump is mostly a spillover from the dive in US and global shares, behind which the world's worries are that the Sino-US trade dispute could trigger a possible economic collapse.

Cheng Shi, chief economist of ICBC International, said that before the US adds further weight to the current tariff increases it has launched against China, the time is narrowing for China and the US to settle their disputes by mediation, and this sense of urgency has caused panick around the world.

"The market is holding back their expectations for the recovery of the real economy. Although the impact of trade protectionism has not yet been felt, the effects will catch up eventually," Cheng said.

The International Monetary Fund (IMF) recently lowered expectations for global economic growth in 2018 and 2019 by 0.2 basis points compared with its earlier projections in July.

Xi Junyang, a finance professor at the Shanghai University of Finance and Economics, told the Global Times on Thursday that investors both at home and abroad worry that the US stock dive might be a sign that the flourishing US economy is in decline.

"The A-share market is always driven by market moods, and it's normal that in a bearish cycle, it would over react when there are strong fluctuations in overseas markets," Xi said.

Experts are still confident that the A-share market will not be swept by the pessimistic mood and will show a firm upward trend when the economy improves.

"The bullish market might be late but it is sure to arrive sooner or later," Xi said, adding that late-2019 is likely the point when the A-share market will begin another bull run.

"When the stock market drops but there are positive economic signs, A-share markets will start to rebound regardless of external influence," Xi said.