A step forward for ASEAN, China to resolve maritime row 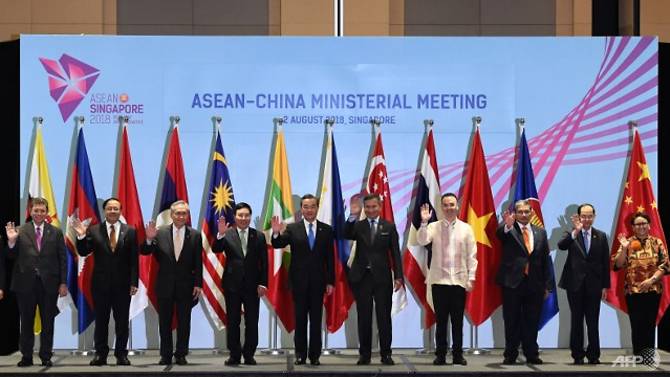 Foreign ministers of China and the Association of Southeast Asian Nations (ASEAN) had agreed to adopt a "single text" on negotiating the code of conduct (COC) on the South China Sea before they gathered for an annual meeting on Thursday in Singapore, according to Thai media outlet The Nation. Previously every stakeholder in the South China Sea had their own version of the text for negotiation.

Philippine Foreign Secretary Alan Peter Cayetano said that COC talks could be concluded this year or next, although other Asian diplomats have not been as optimistic, AP reported Wednesday. Regardless, the adoption of a single text is a significant initial step taken by China and ASEAN countries toward resolving the long-seething South China Sea disputes that have dragged down relations in recent years.

Ahead of the foreign ministers' meeting, Japanese broadcaster NHK said the diplomats would raise fresh "concern" in their joint statement about China's activity in the South China Sea. But this was proved untrue by other media. The South China Sea issue is indeed complicated, but our only option is to start setting rules for the region.

China and ASEAN signed the Declaration on the Conduct of Parties in the South China Sea in 2002, but it is not sufficient to prevent conflicts in the region. After tensions escalated in 2016, the two sides passed a COC negotiating framework in 2017, working toward a legally binding instrument to manage countries' behavior in the waters.

A single text on COC negotiations means that the 10-nation bloc has bridged their internal differences on the issue and technically pushed forward the COC consultation. More importantly, it suggests that ASEAN countries and China, despite their territorial clashes, have come to a consensus on the necessity of addressing disputes through talks and jointly safeguarding peace and stability in the waters.

This is crucial at a moment when the world is changing dramatically. Countries outside the region will not give up roiling the waters over the South China Sea issue for strategic purposes.

It's essential for China and ASEAN to take a cooperative attitude and seek common development, instead of being embroiled in disputes.

This year marks the 15th anniversary of the China-ASEAN strategic partnership. The two sides have become major trading partners for each other and two-way trade volume has risen from $55.2 billion in 2003 to $514.8 billion last year. They have also become key partners in fighting unilateralism and protectionism, safeguarding regional peace and stability, and promoting regional development.

With the DOC being in implementation and the COC in negotiation, China and ASEAN have proved that they are able to properly manage disputes through dialogue and work together for common prosperity. The adoption of a single text on COC negotiation has shown their progress in the right direction.