CHINA A Wuhan the West would never see

A Wuhan the West would never see 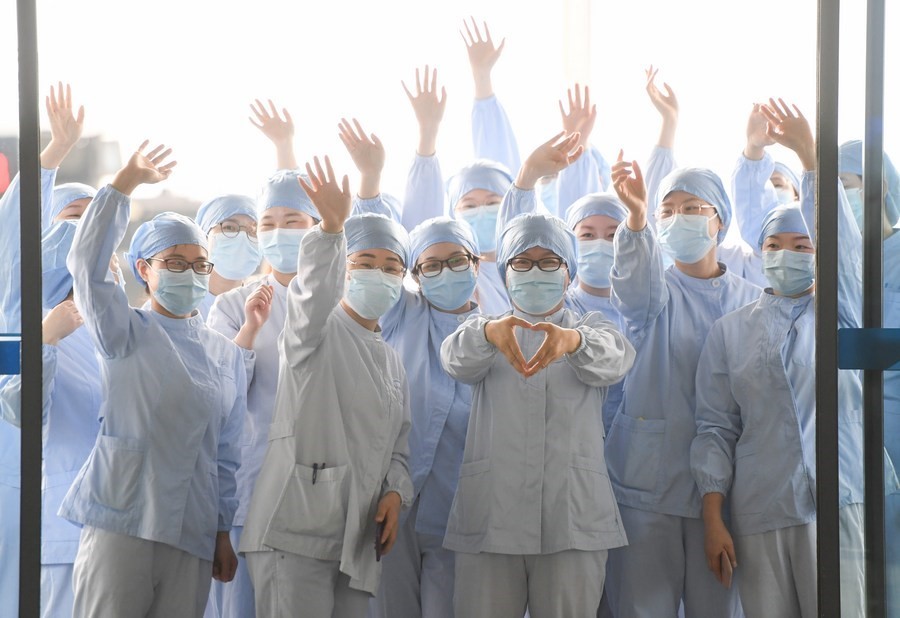 This is the Wuhan that the West would never see. A recorder is put beside a patient's bed, repeatedly broadcasting the innocent voice of the patient's grandchild; music floats in the makeshift hospital where a bunch of infected patients dance with doctors; storing instant noodles in the car, a couple of doctors turn this cramped space into their temporary home; personal items left behind by the diseased are handed out to their beloved one by nurses who say sorry for not saving their lives in tears.

The documentary named "Days and Nights in Wuhan" was released on January 22, unveiling how the ordinary, including the patients, doctors, nurses and community volunteers, lived through during the lockdown in Wuhan. The documentary was filmed by more than 30 photographers who worked on the frontlines during the Wuhan lockdown.

Authentic is the distinguishing feature of this documentary. "This documentary shows us what Wuhan looked like during the COVID-19 pandemic. Each frame is precious, which offers a look into the life of the ordinary during this time, " said a comment written on Douban, an influential Chinese media review website.

Without actors, voice-overs or prepared lines, real footage and conversations were used to pull the audience back to the early stage of the outbreak, especially those who experienced life and death in the Wuhan hospital during that time.

"Our team reached a consensus that we must truly and objectively reveal people's life during the early stage of the outbreak in Wuhan," said Cao Jinlin, a director of the documentary. "Being authentic is the soul of this documentary, and we hope everyone who experiences the outbreak in China can resonate with this film," she said.

Shining light on the Wuhan lockdown, the documentary earns tears from moviegoers who recall unforgettable memories of the national fight against the COVID-19 pandemic. "From nationwide supply donations, to the mobilization of medical workers, what happened in Wuhan during that time is still vivid in my mind," a comment said on Douban, "I felt like I was living this over again."

"Ten stories of Wuhan residents in the film portrayed the fight against the COVID-19 comprehensively and thoroughly. This is not only the memory of Wuhan but also the memory of China," another moviegoer wrote.

"The film should be released around the world, to allow people in the U.S. to watch it. Then they can see how strong-willed Chinese people are and how they respect life. They can also learn how Chinese people survived through this epidemic," said Xu Zheng, a famous Chinese director. 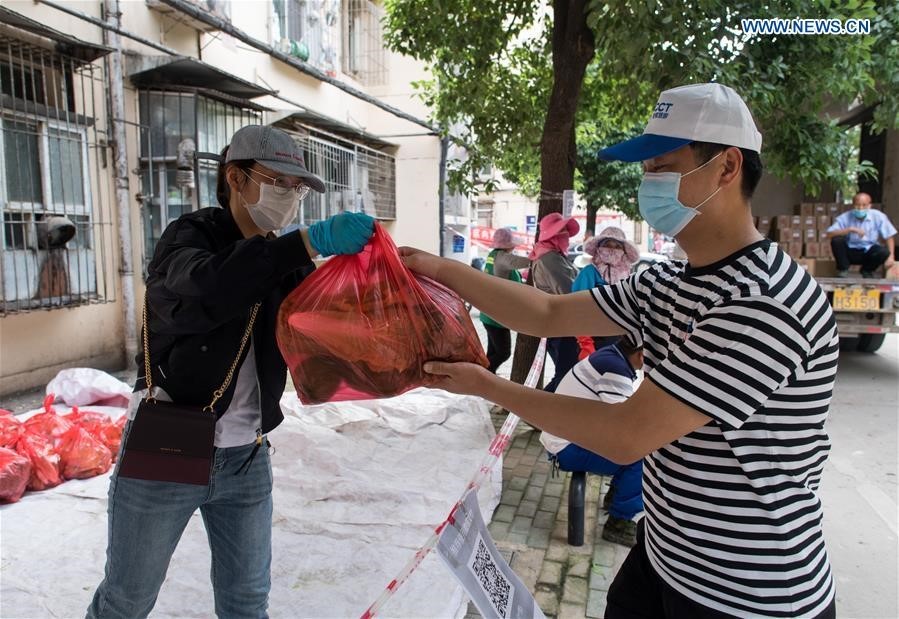 A ghost town under BBC's filter

Unfortunately, western society has barely caught a glimpse of the real Wuhan. Immersed in distorted information, some westerners believe that Wuhan was a "broken and horrible ghost town" where residents were "brainwashed" and "suppressed" by the government.

What brings such a sharp contrast between this documentary and BBC documentaries , answer: the use of out-of-context and untenable evidence and camera technique, which are powerful weapons to defame China.

In BBC's newly released video "54 Days," Dr. Gao Fu, head of China's CDC, was depicted as a liar as he said in the press conference that the COVID-19 is not as deadly as SARS, which scientists all agree on.

Abruptly cutting out Gao's conversation, BBC distorted Gao's words by adding a satiric voice-over saying, "but the virus is more contagious than SARS," to imply that Dr. Gao was covering up the outbreak at that time. However, Chinese authorities warned about how contagious the virus can be in the press conference multiple times.

Such misleading "evidence" and "accusations" are sprinkled in almost every one of BBC's documentaries. Without mentioning the fact that China gave regular updates to the World Health Organization about the virus on Jan. 3, 2020, or that China released the virus pathogen eight days after the outbreak, BBC emphasizes assumptions with no evidence to slander China of covering up the outbreak.

BBC used footage where, during a riot, police arrested a resident with his head covered by a blanket in order to smear China of infringing on citizen's human rights during the lockdown. As it turns out, the footage is from an anti-terrorism exercise. BBC even failed to locate Hubei Province in China.

Except for fabricating materials, some western media outlets are also good at using deliberated settings to mislead the audience. Chinese cities cannot cast off the dull image of less-developed areas, because the press always chooses cramped and chaotic wholesale markets and dark light to represent the city, which Chinese netizens mock as "the filter comes from the hell."

"These are typical camera techniques to give the audience an impression of suppression and disorder," a film and TV industry insider noted.

BBC epitomizes the western media's technique in reporting news related to China. "They are more likely to cover the bad side and sometimes wrong side," said Cao Peixin, a professor from the department of journalism at Communication University of China.

When reporting news related to the COVID-19 pandemic in China, most western media concentrate on the accusation of covering up and holding China accountable, according to a study conducted by a Chinese big data research platform CGCL, which analyzed 16,554 news report about the COVID-19 news in China from Dec. 31, 2019, to April 25, 2020. "It's hard to give a full picture of the outbreak in China when media hold a biased attitude," the study concluded.

"Biased reports blind and distort the public view toward the world, which could have a setback to its society," said Cao. "If the press reported objectively, they would learn China's valuable lessons, such as wearing masks in the fight against the COVID-19 pandemic," he added.

At the end of the "Days and Nights in Wuhan," spring falls on the city. Under the cherry tree, a child is bargaining with his grandfather, who this time doesn't need to hear from the recorder. Wuhan is moving on, but the West chooses not to see. 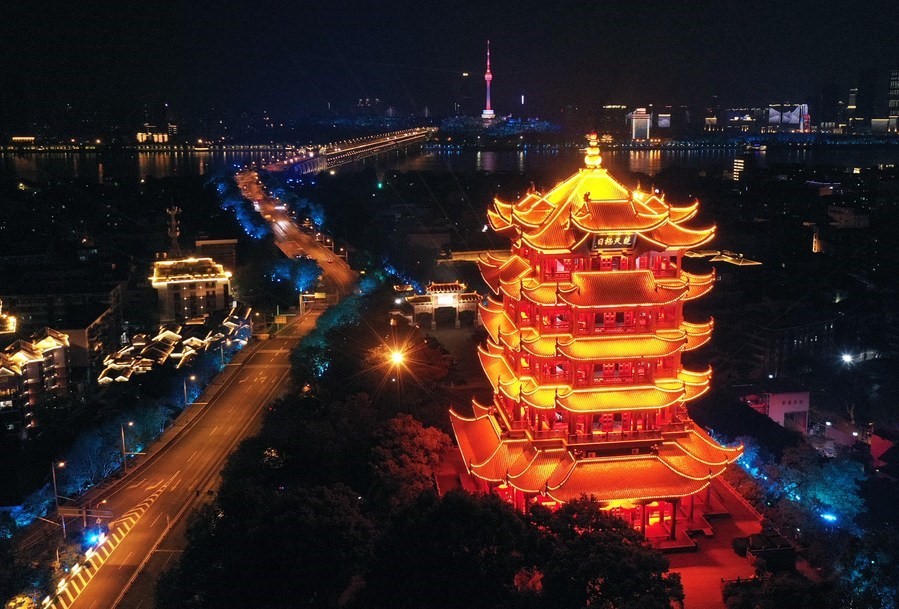 Aerial photo taken on April 7, 2020 shows the illuminated Yellow Crane Tower, or Huanghelou, a landmark of the city of Wuhan, central China's Hubei Province. (Xinhua/Li He)