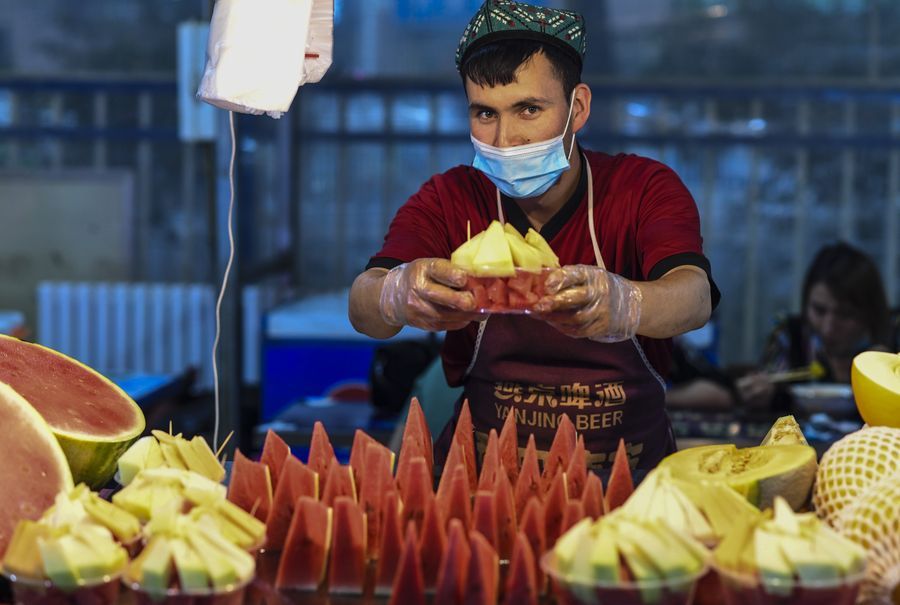 BEIJING - When the United States signed a bill on China's Xinjiang into law, the mask of the so-called "democracy" and "human rights defender" slipped, and Washington's face showing hegemony and human rights violations emerged.

The so-called "Uyghur Human Rights Policy Act of 2020," based on hearsay, fabrication, and distorted reporting, maligns the hard-won anti-terrorism and anti-extremism achievements in Xinjiang Uygur autonomous region and the condition of human rights there. The act blatantly violates international law and basic norms governing international relations, and is a gross interference in China's internal affairs.

Anyone who respects the facts can see that through efforts including establishing vocational education and training centers in Xinjiang and fighting terrorism and extremism in accordance with law, the frequent incidents of terrorist activities have been effectively curbed and people's rights to life, health and development safeguarded.

The region will eliminate absolute poverty this year along with the rest of the country. Since 2014, more than 470,000 new urban jobs have been added annually, with a registered urban unemployment rate below 4.5 percent. People's health has been guaranteed during the COVID-19 epidemic, with no confirmed cases reported for more than four months. Normal religious activities have been protected in accordance with the law. People enjoy the right to use their ethnic languages and inherit their cultures.

Xinjiang is in its best period of development, with people of different ethnic groups and religious beliefs living together as equals, enjoying unity and harmony, and leading a peaceful and stable life.

The Chinese government is fully justified in making all-out efforts to eradicate the root causes of extremism, violent terrorism and separatism to make sure the time when people lived in the shadow of fear, poverty and death will never come back.

The enactment of the U.S. bill, however, backs terrorist and extremist forces. The real intention of the act is to sow discord among the ethnic groups in China, harm Xinjiang's prosperity and stability, and contain China's development. It is a stain on conscience and justice.

Using Xinjiang-related issues as a tool to pursue selfish gains at the expense of other countries' peace and development interests, the self-proclaimed "human rights defender" has become a stumbling block in the way of the cause of international human rights.

Ironically, on the day the bill was signed, the United Nations Human Right Council began an urgent debate on the current racially inspired human rights violations, systemic racism, police brutality and violence against peaceful protesters, in the follow-up to the killing of George Floyd in the United States.

More than half a century has passed when Martin Luther King Jr expressed his dream, but African-Americans are all still struggling to breathe. A wave of massive protests has surged in the United States.

Besides its long-existing and deep-rooted racism and inequalities, the United States has seen a widening income gap, rising unemployment, and more than 110,000 innocent lives lost in the COVID-19 outbreak because of the administration's inadequate response.

At a time when the United States should really focus on addressing its own human rights problems, the enactment of the bill on Xinjiang only reveals how irresponsible, hypocritical and finger-pointing politicians could put human rights in peril.

Nothing more than a piece of paper full of lies, Cold-War mentality and political prejudice, the act belongs in a garbage dump.