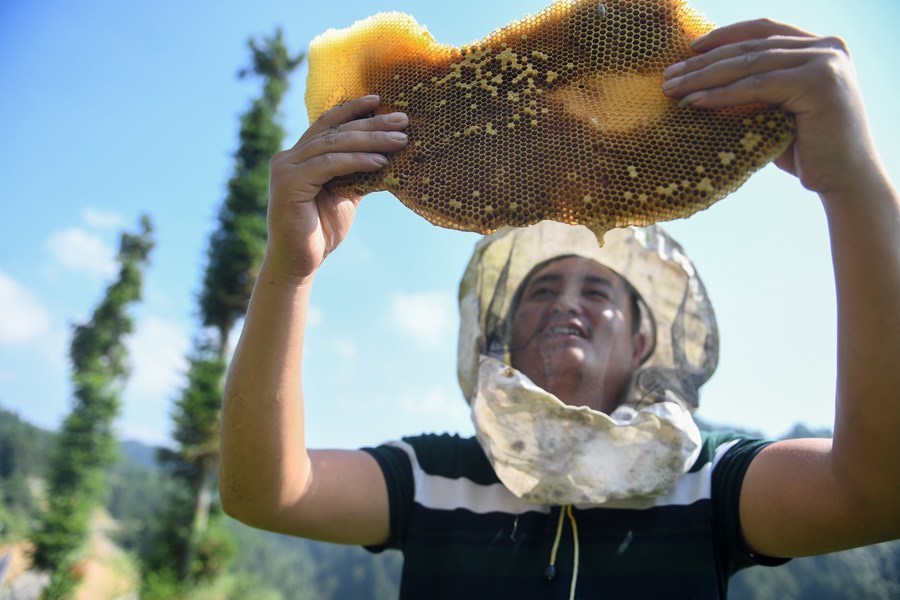 CHANGSHA, Aug. 21 (Xinhua) -- Nobody in Shibadong Village, including Long Xianlan himself, could have imagined that hopeless lazybones like him would one day become an entrepreneurial role model.

Nestled in the mountains, Shibadong is an extremely impoverished Miao ethnic minority village in Huayuan County, central China's Hunan Province. In 2013, some 130 households, or 60 percent of its population, were living below the poverty line.

Long's condition was even worse. His mother left home out of despair when he was around 12, a year before his alcoholic violent father passed away. Two years later, his only sister drowned.

Long had since then lived alone in self-abandon. Having dropped out from school and without a job, he used to borrow money for booze and was often found passed out drunk somewhere in the village.

"I was afraid of waking up, and felt bored when I was sober," recalled the 34-year-old Long. "I couldn't help but ask why my life was so miserable and why nobody loved me?"

People sympathized with Long in his misfortune, especially when hearing him bellowing hysterically at night, but they were also angry at the way he gave up hope.

In late 2013, a "targeted poverty alleviation" policy was rolled out in Shibadong, which became a testing ground and later the paragon of the relief measure.

Due to the scarcity of arable land, the village chose to develop businesses that suit local conditions, such as planting kiwifruit or working in tourism and embroidery industries, other than traditional farming.

How to get people like Long out of poverty became a headache for local officials. But bearing in mind that no one could be left behind on the road to a moderately prosperous society, a solemn promise made by the Communist Party of China (CPC), the poverty alleviation team dispatched from Huayuan County tailored a plan for Long Xianlan and made Long Xiulin, then head of the team, his one-on-one "tutor."

For a heartbroken man, love is perhaps the most effective remedy. The team leader decided to help Long Xianlan regain confidence in life, and treated him as his little brother. During the Spring Festival of 2014, Long Xiulin even took Long Xianlan home for the Lunar New Year's Eve dinner, a special occasion for family reunions.

Before leaving, Long Xiulin's mother gifted her "new son" a large bag of food as well as 1,000 yuan (about 154 U.S. dollars) sealed in a red envelope, a Chinese tradition among family members in Lunar New Year.

Long Xianlan burst out crying and knelt down before the old woman. For the first time in many years, he was able to address someone as "Mom!"

A deeply motivated Long Xianlan started to explore ways of learning skills and making money. He tried but failed several times. Long Xiulin once paid for him to rent a booth to sell fish in a farmers' market in the county seat, but poor business forced him to pull out after just one month.

Later in 2014, Long Xiulin suggested Long Xianlan learn beekeeping and helped him secure a 20,000-yuan loan, as the mountainous Shibadong was found to be an ideal habitat for bees.

"It was not easy at the beginning. But no matter whatever difficulty I encountered, my elder brother offered help and support by all means," said Long Xianlan.

He won his first pot of gold in 2016 in the form of 5,000 yuan worth of revenue by selling honey. In the same year, Shibadong was among the first batch of villages in Hunan that lifted all its households out of poverty.

Today, Long Xianlan is a famous beekeeper, well known in the village and beyond, earning over 400,000 yuan per year. He has registered a trademark for the honey produced by his bee farm, and led the establishment of a local cooperative, which has provided free skill training to villagers. 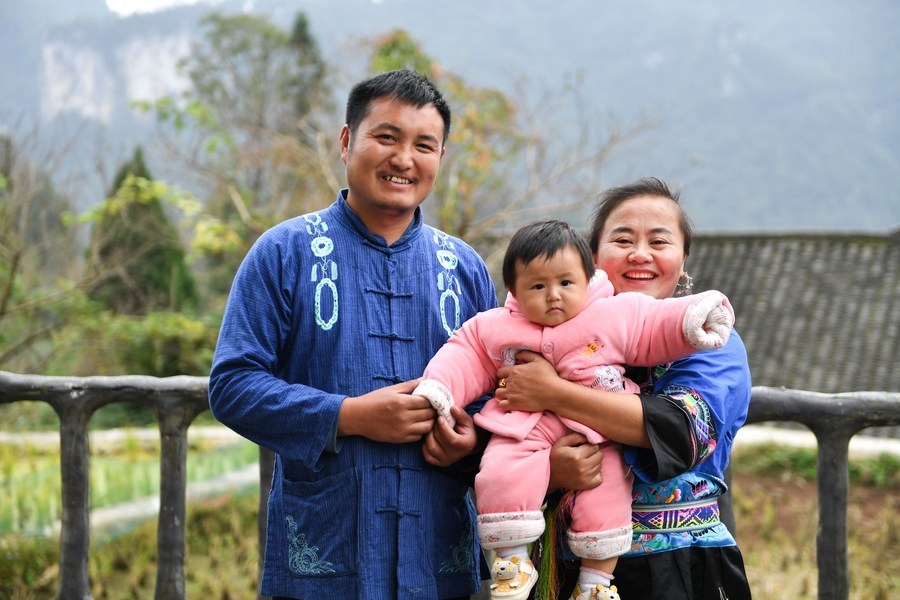 The long-time orphaned finally got a family of his own in 2017. During a matchmaking event, he won the heart of Wu Manjin from the neighboring village after he did 18 push-ups at a stretch.

In March 2020, their first child was born. Long Xianlan named her Si'en, meaning "be grateful for people's kindness."

After successfully vanquishing poverty, the villagers in Shibadong have continued their pursuit of better lives. Last year, the per capita income of villagers exceeded 18,000 yuan, 11 times that of 2013.

On July 1, China announced it achieved its first centenary goal -- building a moderately prosperous society, or Xiaokang in Chinese, in all respects.

The unremitting support of CPC members has impelled Long Xianlan to become a Party member. He has submitted an application letter to join the CPC. "After receiving so much support from CPC members, I want to become one of them so I can help others," he said.